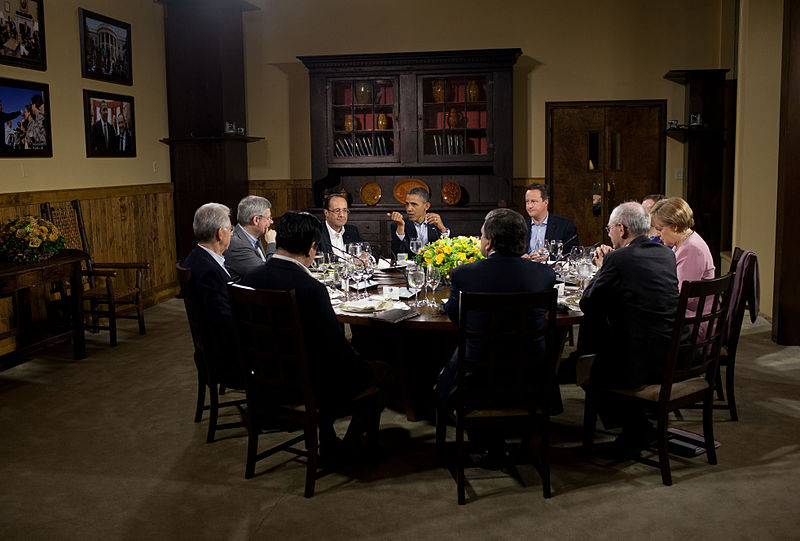 Differences between Russia and the West mean an international peace conference on Syria is now unlikely before August, a source at a meeting of Group of Eight leaders said on Tuesday.

Egypt tourism minister resigns over ‘ex-militant’ Luxor governor
Egypt’s tourism minister tendered his resignation on Tuesday over President Mohamed Morsi’s decision to appoint as governor of Luxor a member of a hardline Islamist group blamed for slaughtering fifty-eight tourists there in 1997. Prime Minister Hisham Kandil did not accept the resignation; however, the move pointed to a split in government over an appointment that one critic called "the last nail in the coffin" of the tourism industry. [Aswat Masriya, 6/19/2013]

EU mismanaging 1 billion Euro aid programme to Egypt – report
The European Union is failing to ensure that hundreds of millions of euros in aid to Egypt is used effectively and to make the Islamist government tackle corruption and human rights abuses, a European Court of Auditors report said on Tuesday. EU institutions responsible for aid—the executive European Commission and the diplomatic service—have failed to substantially link cash to results, the auditors said. [Aswat Masriya, Ahram Online, 6/19/2013]

Egypt islamists blame violence on opposition, calm restored in Gharbiya
Egypt’s Muslim Brotherhood on Wednesday blamed the secular and liberal opposition for a wave of violence over the appointment of new Islamist governors. In Gharbiya governorate, clashes erupted in Tanta and Mahalla on Tuesday between protesters and Brotherhood supporters. The protesters were opposed to the appointment of new Governor Ahmed al-Beyaly, former head of the Muslim Brotherhood’s executive bureau in Damietta. [AP, Egypt Independent, Ahram (Arabic), 6/19/2013]

Interior Ministry preparing master plan to dissolve all brigades
A resolution passed by congress on June 9 ordered Prime Minister Ali Zidan to plan for the dissolution of all brigades by the end of the year, by force if necessary, and the integration of their members on an individual basis into the army or police. The Interior Ministry is responsible for carrying out the task and has begun meeting with the commanders of all the Libya Shield brigades in the first of what would be series of meetings to outline steps on disbanding the brigades. [Libya Herald, 6/18/13]

Derna local counselors strike in protest at “government inaction” and judge’s murder
Members of Derna Local Council have gone on strike in protest of the assassination of a local prominent judge on Sunday and at what they say is the government’s dereliction of its duties towards the town. According to council leaders, the government has so far taken no action in response to the assassination of the judge and has provided no funding to the council since January 2012. Resentment is focusing on Prime Minister Ali Zidan, as some Derna Congress members have asked the congress to assess Zidan’s performance as Prime Minister. [Libya Herald, 6/18/13]

Congress to elect new head next Tuesday June 25
The General National Congress (GNC) has set Tuesday, June 25 as the date for the election of its new head. According to news agencies, Mahmoud Jibril’s National Forces Alliance will not put a candidate up for the GNC leadership and would support a candidate from the East to defuse the federalism issue. [Libya Herald, 6/18/13]

Qaddafi son accuses Libya of disregard for law over trial attempt
A lawyer for Saif al-Islam Qaddafi, the son of the ousted Libyan dictator Muammar Qaddafi, has accused the authorities in his country of showing a "blatant disregard" for the International Criminal Court (ICC) by announcing they will put him on trial in August. In an urgent submission to the Hague-based court, the British lawyer John Jones asked appeal judges to reject Libya’s request to suspend an order that Tripoli surrender Qaddafi to the court. [AP, 6/19/13]

G8 urges Syria peace talks but no mention of Assad
Differences between Russia and the West mean an international peace conference on Syria is now unlikely before August, a source at a meeting of Group of Eight leaders said on Tuesday. The final communique of the meetings called for peace talks to be held as soon as possible to end the war in Syria but made no mention of a date for the conference, and did not address the fate of Assad. [Reuters, NaharNet, 6/19/2013]

Syrian rebels launch attack to block northern highway
Rebels attacked a main highway in northern Syria on Wednesday to try to choke off a major supply line for President Bashar al-Assad’s forces in the region. The pro-opposition Syrian Observatory for Human Rights said the rebels had seized an army checkpoint on the Ariha-Latakia stretch of an international highway that goes through Syria’s biggest city, Aleppo, to the Turkish border. [Reuters, Daily Star, 6/19/2013]

Kurds carve out autonomy in chaos of Syrian civil war
Taking advantage of the chaos of the civil war, Syria’s Kurdish minority has carved out a once unthinkable degree of independence in its areas, creating its own police forces, even its own license plates, and exuberantly going public with its language and culture. But by pursuing their own path distinct from both the opposition and the regime, Kurdish militiamen are also colliding with Sunni rebels. [Daily Star, 6/19/2013]

Measles epidemic sweeps northern Syria
An epidemic of measles is sweeping through parts of northern Syria, with at least 7,000 people affected because the ongoing civil war has disrupted vaccination programs, Doctors Without Borders said Tuesday. Vaccination coverage for measles has dropped from around eig percent to almost zero among young children, it added. [Daily Star, 6/19/2013]

Tunisian court jails Salafists for burning Sufi shrine
A Tunisian court has sentenced six radical Islamists to five years in prison for burning a Sufi Muslim shrine in one of a spate of attacks that have highlighted rising militancy in the country that ignited the Arab Spring. Last October, Salafi Muslims descended upon Saida Manouba, a famous Sufi shrine in Tunis, setting it alight and attacking visitors. [Reuters 6/18/2013, AFP 6/18/2013]

Imams stage sit-in to rid mosques of extremists
More than two hundred Tunisian imams launched Monday a distress call to save mosques from the risk of religious extremism. Imams from mosques in Tunis and Ben Arous staged a pre-strike sit-in outside the Ministry of Religious Affairs and want the ministry to break the Salafi’s grip on mosques before the holy month begins. They plan to hold a hunger strike during Ramadan. [All Africa, 6/18/2013]

National Constituent Assembly sets date to discuss impeachment, political exclusion law
The National Constituent Assembly (NCA) Bureau will hold a meeting next Friday to set the dates for plenary sessions that will discuss the motion to impeach the president, the election of the Independent Higher Authority for Elections, and the draft law on political exclusion of former regime officials. During a meeting held Tuesday under the chairmanship of NCA President Mustapha Ben Jaafar, the NCA Bureau also discussed plans to hold a plenary debate on the security situation in Tunisia. [All Africa, 6/19/2013]

Three people killed in northern Yemen bombing – official
Three people were killed and eight wounded in a town in northern Yemen on Wednesday when a suicide bomber riding a motorcycle blew himself up in a busy market, a security official said. The attack occurred in Saada, a town near the border with Saudi Arabia and about eighty miles north of the capital, Sanaa. [Reuters, 19/6/2013]

International community urged to fulfill commitments to Yemen
The World Bank urged international donors to deliver on commitments to Yemen at a meeting in Sana’a today which focused on the country’s reform agenda and took stock of progress made so far. On the sidelines of the meeting, the World Bank also signed two grant agreements with the Government of Yemen totaling $9.2 million designed to underpin the sort of initiatives Yemen’s economy needs urgently to boost small businesses and help rebuild trust in public institutions. [World Bank, 06/19/2013]

Yemen seeks removal of Red Sea, Bab al-Mandab from piracy risk list
Yemen has called for the removal of the Red Sea and the Bab al-Mandab strait from the list of the risk of high seas piracy. The call was made by Chairman of the General Authority for Maritime Affairs, Yasser al-Zamani, during a meeting at the headquarters of the International Maritime Organization on Monday. [Saba, 19/06/2013]

Lebanese army sets up Sidon outposts in wake of armed clashes
The Lebanese Army set up outposts Wednesday in the volatile areas east of Sidon, south Lebanon, a day after armed clashes left one man killed. Lebanese troops were seen manning at least ten outposts in and around the eastern Sidon suburb of Abra, the scene of gunbattles Tuesday between supporters of Salafi Sheikh Ahmad Assir and a pro-Hezbollah group. [Daily Star, 6/19/2013]

Iraq moves troops to Syrian, Jordanian borders
The Iraqi army has moved nearly eight thousand troops to the Syrian and Jordanian borders since Monday and is conducting security operations to cut off communications between gunmen and prevent fighters from the conflict in Syria from moving into the country before local elections are to be held in the cities of Mosul and Anbar. [Al-Monitor, 6/18/2013]

Jordan’s free-press decade ended when it banned my news site – and 212 others
The aspirations of the king—which have translated into a promise to privatize the airwaves—have done little to move the bar on the crucial issue of democracy: a free press. But while the traditional media have remained stuck to protocol (the King still is the lead story on TV and in the government-owned papers), the desire for information, debate, and discussion in this well-educated country has not. [Globe and Mail, 6/18/2013]