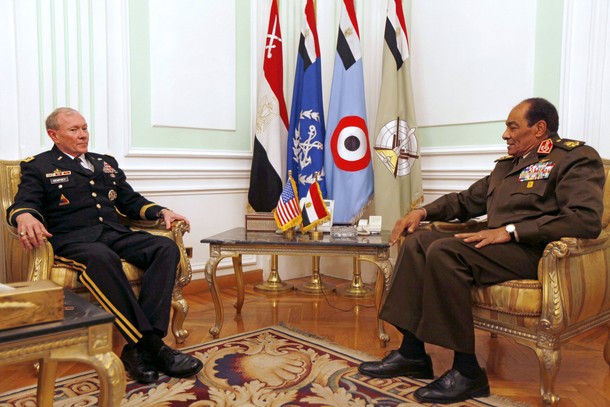 Gen. Martin Dempsey, chairman of the Joint Chiefs of Staff discussed the NGO crisis with Field Marshal Tantawi in Cairo on February 11. Results of the discussion were not made public, but Field Marshal Tantawi later stressed the importance of maintaining strong ties with the U.S. in a meeting with the cabinet.

1) The first day of a nationwide strike and campaign of civil disobedience aimed at forcing the SCAF to step down was largely ignored on February 11, but organizers say they are revising their tactics and will continue trying to mobilize the public against the military. The planned rally in Tahrir Square on February 11, timed to coincide with the one-year anniversary of Hosni Mubarak’s resignation was sparsely attended. Buses and trains operated normally as did the Suez Canal, even though workers had said they would join the strike. Flights schedules were not interrupted and local media reported that civil servants volunteered to work extra hours to preempt a breakdown in services. [Reuters, English, 2/13/2012]

2) Minister of Parliamentary Affairs, Judge Mohamed Attia, has authorized the People’s Assembly to set a date for the questioning of Field Marshal Tantawi and Interior Minister Mohamed Ibrahim over the soccer-related violence in Port Said. Meanwhile, the fact-finding committee tasked with investigating the incident issued a statement blaming police for facilitating the violence by failing to interview: "There were signs that this type of violence would happen after the match…The Port Said security chief, however, refused to take measures to prevent the violence before it happened," the report stated. [al-Ahram, English, 2/13/2012] [The Egyptian Gazette, English, 2/13/2012]

3) Hussein Ibrahim, head of the FJP’s parliamentary bloc, condemned the government’s "disregard" for the fact-finding committee tasked with investigating the soccer-related violence in Port Said, claiming that the cabinet has ignored the committee’s requests for special reports from the Interior Ministry dealing with its role in securing the soccer stadium. [al-Shorouk, Arabic, 2/13/2012]

5) Several political groups led by the Social Democratic Party issued a joint statement condemning the alleged eviction of 8 Coptic families in the al-Nahda village near Alexandria following clashes sparked by rumors of an affair between a Coptic man and a Muslim woman. On February 12, a group of Coptic youth movements marched on the parliament building on to protest the incident. Their protest led to a hearing held by the People’s Assembly’s Human Rights Committee. [Bikya Masr, English, 2/13/2012] [al-Arabiya, English, 2/13/2012]

6) An FJP spokesman, Hossam al-Wakil, denied reports that 8 Coptic families had been evicted, claiming that only one Christian family and one Muslim family were relocated to diffuse sectarian conflict. Al-Wakil claimed that Christians are co-existing with Muslims in al-Nahda village "without any problems whatsoever." [IkhwanWeb, English, 2/13/2012]

7) Gen. Martin Dempsey, chairman of the Joint Chiefs of Staff discussed the NGO crisis with Field Marshal Tantawi in Cairo on February 11. Results of the discussion were not made public, but Field Marshal Tantawi later stressed the importance of maintaining strong ties with the U.S. in a meeting with the cabinet. [NYT, English, 2/13/2012] [Reuters, English, 2/12/2012]

8) Egypt will offer $2.5 billion in dollar debt in the next two weeks and look for $10 billion from land sales over three years to reduce record local borrowing costs and replenish dwindling foreign reserves. [Bloomberg, English, 2/13/2012]