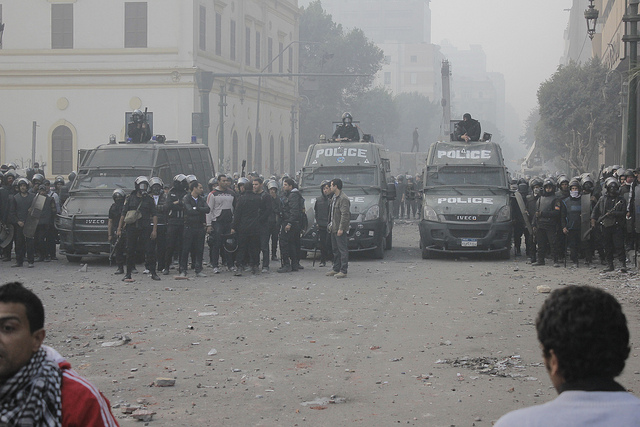 Amnesty International has criticized what it describes as the continuity of torture in Egypt and a failure to punish those responsible for abuses. In its annual Egypt report, the human rights group that said torture policies, discrimination and impunity from punishment persisted in Egypt in 2012. Meanwhile, Minister of Interior Mohamed Ibrahim honored 11,432 policemen nationwide for their efforts in capturing criminals.

FJP and National Conscience Front criticize NSF rejection of dialogue
The Freedom and Justice Party (FJP) and the National Conscience Front (NCF) have criticized the Egyptian opposition bloc, the National Salvation Front (NSF), for its decision to reject President Mohamed Morsi’s invitation to a national dialogue on the Sinai hostage crisis. Murad Ali, media advisor to the FJP released a statement on Wednesday, which called on those who did not attend the dialogue to reassess their stance. Ali said, “Democracy requires that such a minority should cooperate with the government, and not refrain from extending a helping hand, especially in a national crisis”. He added, “The NSF has lost much due to its recent positions that appear to be determined attempts to destroy the President even at the expense of the suffering of ordinary citizens”. [DNE, IkhwanWeb, 5/23/2013]

Liberal parties welcome ElBaradei’s call for a unified body
Leaders of several liberal parties welcomed founder of the Dostour Party, Mohamed ElBaradei’s, call for a unified body. Ahmed Said, the head of the Free Egyptians Party revealed that they are in the midst of negotiations to merge with the Egyptian Social Democratic Party. In a statement on Friday, it was also announced that the Dostour Party has merged with the Democratic Front, as well as other liberal parties. [AMAY (Arabic), 5/24/2013]

Shura Council to continue discussing Judicial Authority Law on Saturday
Several members of the Shura Council announced their refusal to postpone discussions on the Judicial Authority Law (JAL) this Saturday, despite Council leader Ahmed Fahmy’s request to do so. Freedom and Justice Party (FJP) members insist on going forward with the discussion, saying that the law will take another two months to draft. Dr Abdel Azim Sharqawy rejected calls on bringing the presidency into legislative matters, while al-Watan party member Moataz Abdel Khaleq said the party intends to vote against discussing the JAL for the time being. The Jama’a Islamiya’s Construction and Development Party has called on postponing discussions until after parliamentary elections. [AMAY (Arabic), Shorouk (Arabic), 5/24/2013]

Egypt delays decision on closing airport terminal at night
Magdy Abdel-Hady, Egyptian Holding Company for Airports and Air Navigation chief, announced on Friday the cancellation of a proposal to partially close at night Terminal 3 in Cairo International Airport. The proposal was scheduled to be implemented as of June 2013. In a statement to the media, Abdel-Hady said the plan will not be executed next month but is still being considered. He also explained that it will not be implemented except after taking passenger, airline, and airport considerations. [Ahram Online, EGYNews (Arabic), Shorouk (Arabic), 5/24/2013]

Egypt’s cash-strapped rulers woo former regime tycoons
Almost three years after an uprising fuelled by the old regime’s venality, Egypt’s cash-strapped Islamist government is making amends with businessmen who offer to pay their way back into the fold. The presidency, strapped to a free falling economy, has said it encourages reconciliation with the businessmen. The presidency has sent “a positive message to businessmen to encourage them to settle their situation legally, and the state strongly welcomes them to participate,” said presidential spokesman Ihab Fahmy. In a televised statement on Wednesday, Morsi reached out to businessmen and investors, as part of a wider call for national unity. “Let’s look forward, not back. Let’s reconcile with those who seek reconciliation, including investors and businessmen,” Morsi said. [DNE, 5/24/2013]

Egypt plans to issue Sukuk in early 2014
Egypt aims to issue a Sukuk to international and domestic markets at the beginning of 2014, the country said in its new $12 billion euro medium term note program. The remarks come just weeks after President Mohamed Morsi approved a law allowing the state to issue Islamic bonds. [Amwal Al Ghad, 5/24/2013]

Security source: Heightened security in Sinai as army closes in on kidnappers
Sinai is witnessing heightened security, particularly in the vicinity of the Rafah tunnels, as the Armed Forces continues its search for kidnappers accused of abducting seven Egyptian soldiers. A security source claimed that the kidnappers were trying to escape to the Gaza Strip as military forces closed in on them, after information was received on their whereabouts in East Sinai. [AMAY (Arabic), 5/24/2013]

Interior Minister rewards policemen while Amnesty International criticizes ministry
Amnesty International has criticized what it describes as the continuity of torture in Egypt and a failure to punish those responsible for abuses. In its annual Egypt report, the human rights group that said torture policies, discrimination and impunity from punishment persisted in Egypt in 2012. “No legal or policy reforms were implemented to eradicate torture under either the SCAF (Supreme Council of Armed Forces) or President Morsi’s administration,” the report stated. In the report, covering the period from January to December 2012, Amnesty quoted an Egyptian non-governmental organization as saying that 88 persons were subject to torture or other ill-treatment by police during President Morsi’s first hundred days in power. Meanwhile, Minister of Interior Mohamed Ibrahim honored 11,432 policemen nationwide for their efforts in capturing criminals. Of the 11 thousand policemen, 9,840 were in Sinai alone. Ibrahim rewarded 592 officers, 747 policemen and 8501 Central Security conscripts for their ‘special’ efforts in maintaining peace amid (turbulent) circumstances, reported state-owned news agency MENA. [Ahram Online, DNE, AMAY (Arabic), 5/24/2013]

Calm state in Tahrir Square before demonstrations as calls for June 30 protests begin
A state of calm prevailed in Cairo’s Tahrir Square on Friday morning before a planned demonstration which several revolutionary parties and forces have called for. Participants in today’s demonstration demand retribution for the martyrs, early presidential elections and the release of all detainees. The Maspero Youth Union also called on revolutionary forces to participate in a memorial march on Friday for the Khusus victims. Meanwhile, calls for protests on June 30, the anniversary of President Mohamed Morsi’s inauguration, have begun. The April 6 movement has called on a protest against ‘Brotherhood Rule’, while activists, among them members of Tamarod, have also said that the Brotherhood call to take to the streets on June 30 in support of Morsi could lead to the beginnings of a civil war. [Aswat Masriya, Shorouk (Arabic), ONA (Arabic), AMAY (Arabic), 5/24/2013]

National Council for Human Rights issues report after prison visit
Following a visit to the Aqrab Prison in mid-May, the National Council for Human Rights has issued a report. The NCHR stressed the need to develop a strategy to reform Egypt’s penal institutions, with the report highlighting the deteriorating infrastructure of the prison, its poor safety standards, overcrowded cells and poor health care offered to inmates. The fact finding commission, led by Mohamed al-Beltagy, called on the need to treat all prisoners in accordance with international standards, as well as calling for the renovation of prison wards, providing basic needs as well as ensuring prisoners have access to exercise, reading, and prayer areas. [Shorouk (Arabic), AMAY (Arabic), 5/24/2013]

Egypt’s Morsi to participate in African Union Summit
Egypt President Mohamed Morsi has left Cairo Friday afternoon to attend the 21st African Union Summit in Addis Ababa, scheduled from 19 to 27 May, which coincides with a celebration of the 50th anniversary of the continental organization. President Morsi will hold talks with a number of African leaders and presidents during the summit, according to presidential spokesman Ihab Fahmy. President Morsi will also participate in the summit meeting, to be held Saturday 25 May, to commemorate the 50th anniversary of the founding of the continental body – African Union (AU). [Ahram Online, Aswat Masriya, EGYNews (Arabic), 5/24/2013]

Hamas calls on Egypt to reevaluate Camp David Accords
Hamas’ leader Ismail Haniyeh has called on Egypt to reconsider or revoke the Camp David Accords with Israel. Speaking at a mosque in Gaza, Haniyeh said “We do not interfere in Egypt’s internal affairs, and it is a sovereign state, but as brothers and not out of obligation, we call on [Egypt to] reconsider, if not cancel, the Camp David Accords.” Haniyeh stressed the need to reevaluate the security clauses saying they have led to a security vacuum that could be exploited by Israel. He also called on Egypt to establish a strategy for the development and protection of Sinai, as well as underlining the need for a new policy concerning the Rafah Crossing. [Shorouk (Arabic), AMAY (Arabic), 5/24/2013]