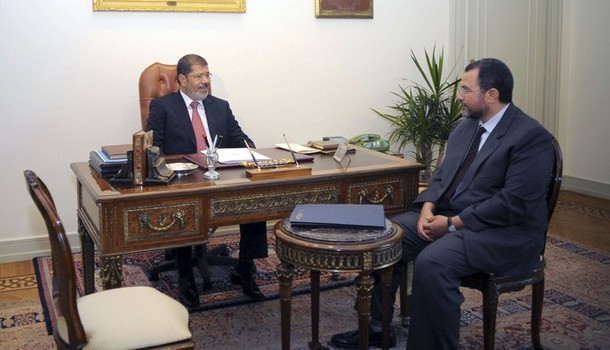 Water Resources and Irrigation Minister Hesham Mohamed Qandil is Egypt’s new prime minister, said the official Facebook page of the Muslim Brotherhood’s Freedom and Justice Party Tuesday. Qandil was a senior bureaucrat in the ministry until he was appointed minister in July last year when former Prime Minister Essam Sharaf’s reshuffled the cabinet.

[Al Shorouk (Arabic), Egypt Independent, 7/24/2012] Water Resources and Irrigation Minister Hesham Mohamed Qandil is Egypt’s new prime minister, said the official Facebook page of the Muslim Brotherhood’s Freedom and Justice Party Tuesday. Qandil was a senior bureaucrat in the ministry until he was appointed minister in July last year when former Prime Minister Essam Sharaf’s reshuffled the cabinet. Morsy is expected to meet with Qandil and then hold a press conference. Morsy had promised to choose a premier from outside the Brotherhood, and that his choice would form a unity government. His powers are unclear, as well as the military’s role in choosing appointments for top security portfolios. This week a source close to the president’s office denied to Al-Masry Al-Youm that Kamal al-Ganzouri’s cabinet would remain in place for three more months.

[Ahram Online, 7/24/2012] Newly appointed Prime Minsiter Hisham Kandil said that there discussions are going on between president Mohamed Morsi and the Supreme Council of Armed Forces (SCAF) regarding who the next minister of defense will be. A constitutional addendum issued on 17 June by the SCAF states in article 53 that the head of the military council, now a position held by Tantawi, will remain minister of defense until a new constitution is drafted. Accordingly, this raises doubts whether Tantawi will be replaced in the coming period. Kandil’s statements revive the debate whether Morsi has recognized the addendum constitutional declaration.

[Egypt Independent, 7/23/2012] Ibrahim Mounir, the Muslim Brotherhood’s international organization secretary who is currently living in England, will return to Egypt and oversee the ongoing development of the group, said Brotherhood sources on Monday. According to the sources, Mounir was given this responsibility by Deputy Supreme Guide Khairat al-Shater, who chose Mounir based on his past experiences and expertise in the field. Mounir will face challenges including overcoming the Brotherhood’s tarnished image abroad, helping the group make the transition from operating clandestinely to publicly, modify its internal regulations, develop a new membership system and improve administrative offices at the provincial level.

[Egypt Independent, 7/24/2012] Ismailia security services freed former Shura Council member Ahmed Khalil on Tuesday after he was kidnapped by armed men in front of his house in city of Fayed. Kidnappers demanded a ransom of LE5 million from his family. Criminal investigators was able to locate the alleged kidnappers in the city of Abu Soweir. After exchanging fire, two of the five men were injured by police before they were arrested. They informed police that Khalil was kept in a remote area in 10th of Ramadan City, investigators said.

[AP, 7/24/2012] Egypt is allowing freer temporary entry for Palestinians into the country in an unprecedented move that eases long-imposed travel restrictions, particularly on Gazans, Egyptian and Palestinian officials said Monday. The decision has caused confusion among the security agencies here – and appeared to bring some resistance. Some officers at the airport refused to implement the measures. Even as some officials initially denied any easing, airport officials said seven Gazans were allowed into Egypt by dawn Monday without the usual restrictions. The changes appeared to be a gesture to the Palestinians after separate meetings last week between Egypt’s new president, Mohammed Morsi of the Muslim Brotherhood, and Palestinian leader Mahmoud Abbas and the leader of Hamas, Khaled Mashaal, whose group controls Gaza.

[Egypt Independent, 7/24/2012] Users of social networking sites along with news website have been circulating an Israeli ad which they claim ‘insults’ President Mohamed Morsy. The advertisement shows an Israeli family on the beach, with the father reading a newspaper, while his children are building temples on the sand. The Israeli advertisement is for the Temple Institute, which promotes for rebuilding of the Temple of Solomon. Some users allege that the symbolic message is that the Egyptian president will not prevent Israel from building temples.