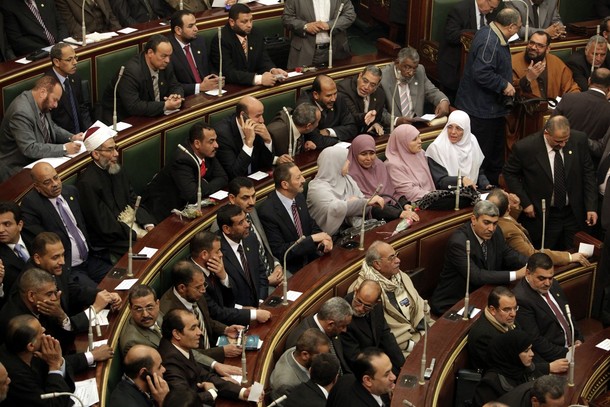 The Freedom and Justice Party and the Salafi Nour Party have objected to the one-month postponement of the lawsuit filed by MPs against the dissolution of the People’s Assembly. They called on political forces to negotiate a solution with the military council whereby Parliament is reinstated while elections for the one-third of sets reserved for independent candidates are repeated.

FJP: Presidential swearing-in location to be decided in 2 days

[Egypt Independent, 6/27/2012] Former members of the disbanded Parliament demand that Morsi be sworn in before the People’s Assembly, while others insist he take the oath of office in front of the Supreme Constitutional Court, the same court that ordered the dissolution of the assembly. An administrative court on Tuesday postponed to 10 July a ruling on lawsuits over the recently issued supplement to the Constitutional Declaration, which has governed the country during the transition. The supplement, issued by the ruling military council shortly before the runoff election on 16 and 17 June, says the new president will be sworn in before the Supreme Constitutional Court.

[Al Arabiya, Al Youm Al Sabi` (Arabic) 6/27/2012] Morsi began Monday the consultations for the formation of his presidential team and the government, which he had promised would not be limited to the Brotherhood’s FJP, but would include the other political parties and forces. There has been talk of Morsi having discussions with Nobel Peace Prize winner Mohammed ElBaradei, the former U.N. nuclear watchdog chief, for the role of prime minister, as a kind of reassurance to non-Islamists. A source close to ElBaradei was quoted by al-Youm al-Sabea as saying that the Nobel Laureate was in intensive consultations with leaders of the Muslim Brotherhood group over nominating him for the post of prime minister and the possibility of forming a coalition government. Ziad Bahaa’ al Din and Amr Shobaky are also rumored as under consideration for the post.

[Egypt Independent, Al Shorouk (Arabic), 6/27/2012] The Freedom and Justice Party and the Salafi Nour Party have objected to the one-month postponement of the lawsuit filed by MPs against the dissolution of the People’s Assembly. They called on political forces to negotiate a solution with the military council whereby Parliament is reinstated while elections for the one-third of sets reserved for independent candidates are repeated. There is no clear reason why the Administrative Court adjourned the case, said FJP leader Sobhi Saleh, calling for a political solution to break the impasse, which disrupts the work of Parliament and postpones President-elect Mohamed Morsi being sworn in. Al Shorouk also reports FJP talks with Tariq al-Bishri exploring a legal plan to reconstitute the People’s Assembly.

[Ahram Online, Egypt Independent, 6/27/2012] The constitution-writing panel will discuss Wednesday whether the political system will be presidential, parliamentary or mixed, among other issues, members of the Constituent Assembly have said. The assembly formed an executive board Tuesday, appointing engineering professor and Freedom and Justice Party member Amr Drag as its secretary general. Five deputies were also chosen: constitutional law professor Atef al-Banna, legal experts Monsef Naguib and Mohamed Kamel, Wasat Party President Abul Ela Mady and Ghad al-Thawra Party head Ayman Nour. After disagreements surfaced on Saturday over the way Constituent Assembly Chairman Hossam al-Gheriany addresses members, the body will also vote on bylaws Wednesday, Nour said. The assembly’s four main sub-committees are basic principles, rights and freedoms, system of government, and regulatory bodies. There will also be a committee to receive suggestions about the constitution from outside the assembly, for example the Journalists’ Syndicate, and another responsible for the wording of the constitution’s articles. As well as working under the threat of dissolution by a court order on 4 September, the assembly faces an additional challenge from last week’s changes to the temporary constitution by the ruling military junta.

Voters who abstained from election may face fines

[Egypt Independent, 6/27/2012] The Presidential Elections Commission may push for fines against eligible voters who did not cast ballots in the presidential runoff on 16 and 17 June. The electoral body said Tuesday it is reviewing voter lists and considering referring those who boycotted the election to prosecutors for investigation. Voting in Egypt is mandatory and anyone who violates the law on exercising political rights could be fined LE100 if they do not have a legally acceptable reason for participating. Elections commission Secretary General Hatem Bagato said the commission is drafting a detailed report about the election process that can be submitted to any committee that supervises future elections.

[Egypt Independent, 6/27/2012] Due to its failure to issue a new law guaranteeing trade union liberties, the Egyptian state may again be on its way to being “blacklisted” by the International Labor Organization (ILO). If the long-anticipated Trade Union Liberties Law is not issued by September, then Egypt may return to being “named and shamed” as a state which violates the ILO’s basic trade union rights. This comes at a time when independent and state-controlled unions continue to struggle among themselves over the representation of Egypt’s trade union movement — both at home and abroad. According to Egypt’s extant legislation, Trade Union Law 35/1976, unions are legally confined to operate under a monopolistic, state-controlled union.

[Egypt Independent, 6/27/2012] The ruling Supreme Council of the Armed Forces ordered on Wednesday the formation of an Islamic scholars committee to choose the head of Al-Azhar, state-run Al-Ahram newspaper reported. The move is in line with amendments the government approved in January to the law concerning the Sunni Islam institution. The law stipulates that its grand sheikh should be elected rather than appointed by the president. The new committee will include a maximum of 40 Al-Azhar scholars representing the four schools of Islamic jurisprudence, and the grand sheikh will serve as its chairman. The amended law includes standards for selecting committee members and gives Grand Sheikh Ahmed al-Tayyeb the power to appoint the first committee.

The Cairo Criminal Court headed by Justice Bashir Abdel Al will deliver a ruling on Thursday in the case of export of natural gas to Israel, and former Minister of Petroleum Sameh Fahmi’s misappropriation of public funds in the amount of $ 714 million. Former businessman (and fugitive), Hussein Salem, and 5 of the former senior officials in the Oil Ministry are also implicated in the case.

Sources at Cairo airport reported on Wednesday, that U.S. Secretary of State Hillary Clinton will reach Egypt on Saturday in the first visit of a U.S. official to Egypt following the victory of Dr. Mohamed Morsi. The sources said that Clinton will arrive on a private jet, accompanied by a delegation from the U.S. to meet President Morsi and the number of officials to discuss the future of US-Egyptian relations and the emphasis on Egypt’s commitment to the peace agreement with Israel and commitment to freedom of religion for Copts. Rumors circulated surrounding exchanges between the Brotherhood and the United States after remarks from the U.S. Secretary of State last week criticized the performance of the Supreme Council of the Armed Forces, and demanded the handover of power to the rightful winner in the presidential election.