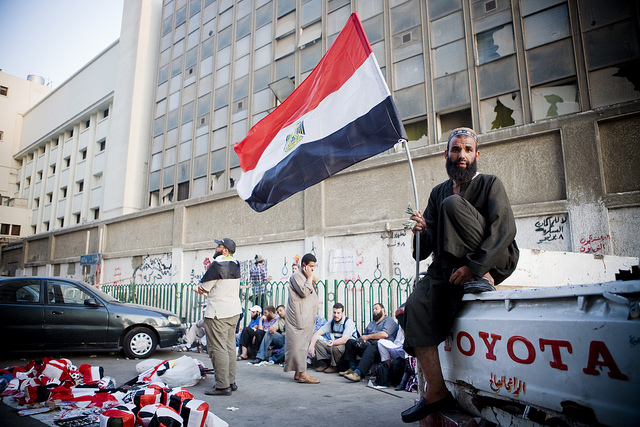 Islamist powers staged a million-man demonstration on Friday at al-Azhar Mosque to express their support for Jerusalem and protest against Israeli violations and the siege of al-Aqsa Mosque. The demonstration aims at asserting that Arabs are not busy with their own domestic affairs and that Jerusalem’s issue is the most important one for Arabs and Muslims, a Muslim Brotherhood spokesman said.

Morsi: Egypt will produce its own food, medicine and weapons
President Morsi and his Brazilian counterpart Dilma Rousseff agreed that the Egyptian leader’s visit to Brazil, the first of its kind, launches a new stage in bilateral relations and unveils new opportunities for the future. Both heads of states pledged efforts to share knowledge and experiences in promoting social programs against hunger and poverty. The president affirmed that after the revolution Egypt wants to produce its own food, medicine and weapons. Hatem Saleh, Minister of Industry and Foreign Trade, said that “the Egyptian dream to have the capacity to produce food, medicine and weapons, is not far-fetched,” stressing that the Qandil government “is currently working hard to achieve it.” [SIS, Shorouk (Arabic), 5/10/2013]

Revolution derailed and under siege, ElBaradei says
Nobel Laureate and prominent opposition figure Mohamed ElBaradei said on his Twitter account on Thursday that the UN High Commissioner for Human Rights’ assessment on Egypt proves that the Egyptian government has “lost its connection with the revolution.” The former director of the International Atomic Energy Agency and coordinator of Egypt’s main opposition alliance (the National Salvation Front) added, “Damning statement by UN High Commissioner for Human Rights (regarding) Egypt democracy, freedom (and) justice!” [Aswat Masriya, 5/9/2013]

Coptic school teacher detained for ‘insulting’ Islam in Egypt’s Luxor
Public prosecutors in the Upper Egyptian Luxor governorate on Thursday ordered the detention of a Coptic-Christian school teacher for four days pending investigation on charges that she had insulted the Islamic faith. Demyana Emad, a 23-year old social studies teacher, was charged with insulting Islam and the Prophet Muhammad at a primary school in south Luxor, state news agency MENA reported on Thursday. In April, the head of the parents association at the Sheikh Sultan Primary School lodged a complaint against Emad with the Luxor Educational Directorate. Emad, who denied the allegations against her, said several Islamic "extremists" had incited school students to testify against her. [Ahram Online, 5/9/2013]

Abu-Ismail to be questioned over ‘offensive’ comments on Egypt military
Egyptian Prosecutor-General Talaat Abdullah has referred a number of complaints concerning certain political figures – including prominent Salafist preacher Hazem Abu-Ismail – to military prosecutors, an Egyptian judicial source stated Thursday. The source clarified that several political figures would be questioned over remarks they made deemed "offensive" to Egypt’s armed forces. The complaints were lodged by a number of lawyers and retired military officials. [Ahram Online, 5/9/2013]

IMF says plans no new visit to Egypt for now
The International Monetary Fund is not currently planning a new visit to Egypt to discuss the country’s $4.8 billion loan program as it awaits new economic data and reform plans from the government, the Fund’s spokesman said on Thursday. "Staff are working actively with Egyptian authorities from headquarters," IMF spokesman Gerry Rice told reporters. He added that loan negotiations under way must reflect the evolving conditions, saying that Egypt’s financial situation is deteriorating and they won’t move ahead with a $4.8 billion loan until receiving updated economic information and reform plans from President Mohammed Morsi’s government. Meanwhile,  Ismail Hassan, chairman of Misr Iran Development Bank and former governor of the Central Bank of Egypt (CBE) said that downgrading Egypt’s long-term sovereign credit rating from B- to CCC+ and short-term rating from B to C with stable outlook by Standard & Poor’s will not affect Egypt’s position in negotiations with the IMF.  [Reuters, DNE, Amwal al-Ghad, AP, 5/9/2013]

Egyptian central bank leaves interest rates unchanged, sells $38.6 mln at forex auction
The Central Bank of Egypt (CBE)’s monetary policy committee on Thursday maintained key lending and deposit rates unchanged at 10.75 and 9.75 percent respectively. In March, the CBE raised lending and deposit rates by 50 points each in the first such move since November 2011. Egypt’s central bank also sold $38.6 million to banks in a foreign exchange auction on Thursday at a cut-off price of 6.9463 Egyptian pounds to the dollar.On the black market, one dealer in central Cairo was offering to buy dollars for 7.45 pounds on Thursday and to sell dollars for 7.50 pounds. [Ahram Online, Reuters, 5/9/2013]

Nour Party to discuss bearded police officers with Minister of Interior
Abdullah Badran, head of the parliamentary bloc of the Shura Council’s Nour Party, said that "the parliamentary bloc will go ahead with the first of its meetings to urgently discuss with Minister of Interior Major General Mohamed Ibrahim’s statements regarding bearded officers. He added that Ibrahim’s statements constitute a direct challenge to judicial rulings, in contravention to his duty to uphold court orders. Ibrahim had told the CBC channel that “he would never allow a bearded officer into the Ministry of Interior. [Shorouk (Arabic), 5/10/2013]

FJP leader stabbed in Alexandria
Leading Muslim Brotherhood member and former member of parliament Mustafa Mohamed was stabbed when leaving party headquarters on Thursday. Mohamed was able to apprehend the assailant and turn him over to the police. The assailant’s brother alleged that he is mentally unstable, but the FJP has labeled it an assassination attempt by political rivals. The FJP has called on the Ministry of Interior to reveal the identity of the accused, likening the attack to a recent assault on Brotherhood member, Sobhi Saleh. [Youm7 (Arabic), Shorouk (Arabic), 5/10/2013]

Police detain activist Ahmed Maher at Cairo Airport
Egyptian police forces at Cairo International Airport detained activist Ahmed Maher upon his return from the United States of America on Friday, activists said. Security sources told al- Masry al-Youm that security personnel at Cairo airport arrested Ahmed Maher, founder of the April 6 Youth Movement, following his arrival from Austria, after having received an order from the public prosecutor to detain Maher on charges of inciting underwear-inspired protests in front of the house of the interior minister almost two months ago. Mohamed Adel, a member of the April 6th Movement, considers the arrest part of a campaign of political intimidation by the Muslim Brotherhood. [Aswat Masriya, Ahram Online, AMAY (Arabic), Shorouk (Arabic), 5/10/2013]

Opposition rallies Friday condemn Morsi failures, call for release of detainees
Opposition groups will hold two marches in Cairo on Friday to condemn the "failures of President Mohamed Morsi and the ruling Muslim Brotherhood." During the march, the grassroots Rebel Movement will be collecting signatures calling for the withdrawal of confidence in President Mohamed Morsi, who hails from the Muslim Brotherhood, and for early presidential elections to be held. The Popular Current held a small demonstration outside the High Court on Thursday afternoon for slain activist Mohamed al-Gendi, while April 6 members marched to the Giza security directorate on Friday to demand the release of two men associated with the group. Meanwhile, opposition groups are staging a protest in Alexandria in objection to the recent limited cabinet reshuffle. In Port Said, members of the Green Ultras staged a protest in solidarity with their members who were convicted in the court case related to the Port Said massacre. [Ahram Online, DNE  Shorouk (Arabic), AMAY (Arabic), 5/9/2013]

Islamists stage demonstration at Azhar Mosque to support Jerusalem, protest Israel
Islamist powers staged a million-man demonstration on Friday at al-Azhar Mosque to express their support for Jerusalem and protest against Israeli violations and the siege of al-Aqsa Mosque. The demonstration aims at asserting that Arabs are not busy with their own domestic affairs and that Jerusalem’s issue is the most important one for Arabs and Muslims, a Muslim Brotherhood spokesman said. Despite the participation of many Islamist groups, the Salafi al-Nour Party said it will not participate in the demonstration. Demonstrators also chanted “the people want the destruction of Israel” in protest of recent Israeli airstrikes in Syria and the detention of a Palestinian Muslim cleric. Aswat Masriya, DNE, AP, AMAY (Arabic), Shorouk (Arabic), 5/10/2013]

Egypt and South Korea sign agreement on nuclear power program
Egypt signed a memorandum of understanding with South Korea on Thursday during a visit by an Egyptian delegation attending the nuclear power capacity-building program of the Korea International Cooperation Agency, according to Korean news agency Yonhap. The agreement will see the two countries work together to train the workforce for a nuclear power plant, share technical information, and discuss ways to appease the concerns of local residents, reported Yonhap. [DNE, 5/10/2013]

European bank to step up aid to Egypt: Governor
The European Bank for Reconstruction and Development (EBRD) will discuss extending aid to Egypt while it transitions to democracy, the bank’s governor and Bulgarian Finance Minister Kalin Hristov has said. The EBRD expects to be investing up to €2.5 billion per year in Egypt, Jordan, Morocco and Tunisia by 2015. In the case of Egypt, the EBRD believes that reaching an agreement with the International Monetary Fund over a $4.8 billion loan "could help cement necessary structural reforms and unlock needed external assistance." [Ahram Online, 5/10/2013]