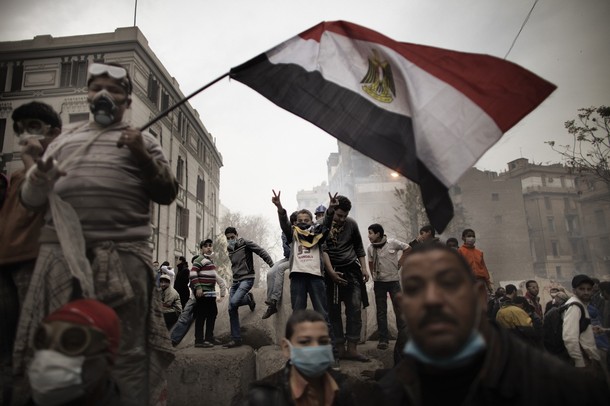 Under growing pressure for an expedited transfer of power to civilians, the SCAF has agreed to move up the start date for presidential candidate registration to March 10, originally scheduled for April 15.

1) The death toll in clashes around the Interior Ministry rose to 15 as heavily armed civilians attacked anti-government protesters. Two more protesters were killed on the night of February 6: One was thrown from the tax administration building, adjacent to Egypt’s interior ministry, while another was fatally wounded by birdshot. [al-Ahram, English, 2/7/2012]

2) Six members of the SCAF-appointed civilian Advisory Council are threatening to withdraw from the consultative body unless the SCAF begins implementing their recommendations for expediting the transitional process. The Advisory Council is also recommending that the process of selecting the 100-member be accelerated, in order to draft the constitution in parallel with the presidential election process. [al-Masry al-Youm, Arabic, 2/7/2012]

4) A debate erupted in the People’s Assembly between some Islamist MPs and liberals over whether or not the police were using birdshot against thousands protesting the Port Said soccer riot. Tensions escalated after parliamentary speaker Saad al-Katatny insisted that police had not used birdshot while confronting protesters, prompting a rebuttal from MP Mohamed Abu Hamed, vice president of the liberal Free Egyptians Party, who presented a birdshot canister that is believed to have been collected from the site of the clashes in downtown Cairo. Meanwhile, a newly formed fact-finding parliamentary committee called for a vote of no confidence in Egypt’s interior minister.  [al-Ahram, English, 2/7/2012] [al-Masry al-Youm, Arabic, 2/7/2012]

5) In a concession to growing pressure for an expedited transfer of power to civilians, the SCAF agreed to move up the start date for presidential candidate registration to March 10 (originally scheduled for April 15, with an election expected by the end of June). [al-Ahram, English, 2/7/2012]

6) An Egyptian military delegation visiting Washington canceled talks with U.S. senators because the group was called home amid new charges against American NGO employees. SCAF members were scheduled to meet on February 6 with senators including Carl Levin and John McCain. [Bloomberg, English, 2/7/2012]

7) Egypt announced that the 19 Americans under investigation for working for democracy-promoting NGOs will be ordered to stand trial on licensing and financial charges. [LA Times, English, 2/7/2012]

8) Minister of Planning and International Cooperation Fayza Aboul Naga said Egypt is ensuring “a correction of the situation, protection of national security and assertion of sovereignty.” “We noticed that unregistered organizations and private companies were being funded,” Aboulnaga was quoted by state media. “The controls aren’t an Egyptian invention, but are in all countries. As a matter of fact, we are more flexible than the States.” [Bloomberg, English, 2/7/2012]