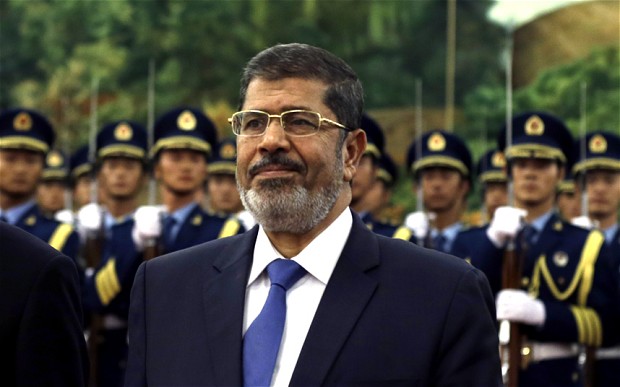 Egypt’s Minister of Parliamentary Affairs Mohamed Mahsoub said Tuesday that a bill has been submitted to President Mohamed Morsy that would repeal Article No. 179 of the country’s Penal Code, which stipulates a prison term for insulting the president.

[Egypt Independent, 8/29/2012] Egypt’s Minister of Parliamentary Affairs Mohamed Mahsoub said Tuesday that a bill has been submitted to President Mohamed Morsy that would repeal Article No. 179 of the country’s Penal Code, which stipulates a prison term for insulting the president. The issue surfaced when Chief Editor of the independent daily Al-Dostour, Islam Afify, was charged in a criminal court with insulting the president and the Muslim Brotherhood. Mahsoub, speaking to Al-Jazeera Mubasher Misr late Tuesday, said the prison sentence will be replaced with a fine.

[Ahram Online, Shorouk (Arabic), 8/29/2012] Mohamed ElBaradei’s Constitution Party officially registered as a political party on Wednesday when party members presented 10,700 documents to the Political Party Affairs Committee at the High Court. Egyptian law requires a political party to collect at least 5,000 notarisation documents before it is officially registered. Excited members wore t-shirts with the words “Constitution,” scrawled on them and waved banners saying “The Constitution Party is for all Egyptians.” Mohamed El-Beltagy, Secretary-General of the Freedom and Justice Party, welcomed the Constitution Party, stressing that the presence of an opposition " does not bother the Muslim Brotherhood; What matters is access to the masses.”

Freedom and rights on agenda

[Daily News Egypt, Youm 7 (Arabic), 8/28/2012] Members of the Constituent Assembly tasked with drafting Egypt’s new constitution have accused the assembly’s drafting committee of wielding too much power and changing the meaning of articles from what the original authors in other committees intended. The assembly met on Tuesday to discuss the first draft of the rights, obligations and public freedoms section of the constitution. Several members of the rights and freedoms committee expressed displeasure at what they called “the drafting committee’s interference in areas beyond its jurisdiction” when they allegedly changing the meaning of not less than 12 articles out of 51 submitted.

[Egypt Independent, al-Ahram (Arabic), 8/29/2012] Information Minister Salah Abdel Maqsoud said Tuesday he would soon launch an awareness campaign titled “Know Your Constitution” to familiarize people with its articles. He said the campaign would encourage people to send in comments for the Constituent Assembly to take into account. “The campaign is being launched at 95 information centers nationwide,” the minister said. Egypt’s new constitution will be drafted by the end of September, Prime Minister Hesham Qandil said on Saturday. Qandil said that once the draft is complete, it would be put forward for a popular referendum. Telecommunications companies also advocate the use of technology in the campaign to reach the most

Constituent Assembly to vote on sharia in Egyptian constitution

[Ahram Online, Youm 7 (Arabic), 8/29/2012] Salah Abdel-Maqsoud, member of both the Constituent Assembly which is responsible for drafting Egypt’s new constitution and the Salafist Nour Party, revealed on Tuesday that the issue of Article 2, the constitutional article related to sharia, will be resolved by taking votes within the general committee of the assembly drafting Egypt’s constitution. According to Abdel-Maqsoud, the vote on the controversial article will be based on three options: firstly, that the article stays as it was in Egypt’s constitution of 1971; secondly, the removal of the phrase "principles", to make Islamic law the main source of legislation; and thirdly, for the 1971 version of the article to stay as it is with the addition of the university of Al-Azhar as a source of legislation.

[Daily News Egypt, 8/29/2012] The Minister of Supply and Internal Trade, Abo Zeid Mohamed Abo Zeid, held a meeting yesterday with owners of bakeries to discuss developing methods for continued bread subsidies as part of the President’s 100-day plan. Abdallah Ghorab, Director of the Bakeries Branch at the Federation of the Chambers of Commerce (FEDCOC), said the meeting discussed the necessity of fixing the price of subsidised bread at 10 piastres, replacing three existing quality categories with one. Ghorab added that fixing price of a loaf and its weight at 140 grams would save the state EGP 100 per sack of flour. This would help reduce the EGP 21 billion spent annually on bread production.

[AP, Ahram Online, Al Masry Al Youm (Arabic), 8/29/2012] Egypt’s military on Wednesday insisted it is pursuing its offensive against Islamic militants in the volatile Sinai Peninsula, denying a claim that the government agreed to halt the operation that followed a bloody border attack. The statement countered a declaration by ultraconservative Salafi Muslims and other radical groups that the offensive was called off in order to avoid an escalation of violence. The official Egyptian Middle East News Agency quoted an unidentified military official as saying that the offensive is still in progress, noting the total number of militants killed since the beginning of the operation has reached 11. Witnesses report the transfer of tanks from the border regions to al-Arish in what appears to be an attempt to calm Israeli objections rather than a winding down of the operation.

[Ahram Online, Egypt Independent, Youm 7 (Arabic), 8/29/2012] Secretary General of the Muslim Brotherhood Mahmoud Hussein said Tuesday that the group’s status was legal, adding that it does not need to be regulated under current laws, recent protests to the contrary notwithstanding.  In an interview with Mehwar satellite channel, Hussein added that the group has existed for 80 years and operated under military and despotic regimes, yet none of its members had been brought to trial “for belonging to an outlawed group.” Protests in Cairo last week called for the group’s dissolution, saying that its existence is illegal under NGO Law 84/2002. In related news, the Freedom and Justice Party has decided to orient its satellite channel, Misr25, toward preaching the Muslim Brotherhood’s ideology to the Egyptian public as part of an effort to develop the Brotherhood’s media outreach.

[Egypt Independent, 8/29/2012] Prime Minister Hesham Qandil met with the US under secretary of state for economic growth on Tuesday to discuss a proposed US aid package to Egypt. Under Secretary of State Robert Hormats is leading a high-level delegation of economists and politicians, which is set to meet with officials from the Egyptian ministries of finance, foreign affairs, and planning and international cooperation. The Tuesday meeting discussed the proposed US aid package to Egypt, which aims to support its state budget, provide requirements for the development of Sinai, and review options for restructuring Egyptian debt to the US, state-run news agency MENA reported.