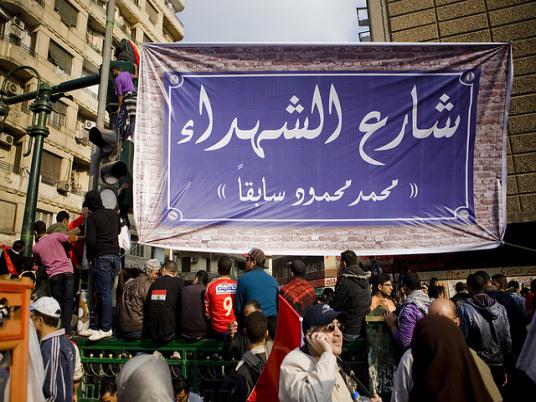 President Mohamed Morsy and his Iranian counterpart, Mahmoud Ahmadinejad, stressed during a phone call the necessity of achieving international consensus to prevent continued Israeli aggression against the Gaza Strip.

FJP president en route to Gaza
Freedom and Justice Party President Saad al-Katatny will visit Gaza Monday with a political delegation. Katatny took a private jet Arish Airport Monday with his delegation Monday. From the airport, the delegation will travel to the Rafah border crossing to visit Gaza. Official sources at the airport said the delegation was composed of members from the FJP, Wasat, Construction and Development, Nour and Labor parties as well as the representatives of about 20 other parties and authorities and independent figures. [Egypt Independent, 11/19/2012]

Egypt army spokesman slams Quorsaya Island residents
The spokesperson for the Egyptian armed forces, Colonel Ahmed Ali, has issued an official statement regarding the clashes between military police and residents of Quorsaya Island earlier Sunday that resulted in the death of one civilian." The disputed land is owned by the Egyptian armed forces and its army’s ownership was documented in the notary office on 12-7-2010," Colonel Ahmed Ali said in a statement posted in his official Facbeook page, adding that the army was planning to use the island as a base to secure the capital. [Ahram Online, DNE, 11/18/2012]

Secular figures, churches withdraw from Constituent Assembly, call draft Egypt’s ‘downfall’
Major secular political figures, announcing their withdrawal from the body writing the new constitution, said that passing the proposed constitution would be equivalent to signing off on Egypt’s downfall. At a press conference on Sunday at the headquarters of the Wafd Party, the political forces warned that groups dominating the assembly are trying to pass the constitution hastily and without serious debate. Acting Coptic Orthodox Pope Bishop Pachomius also announced Saturday that the Egyptian churches were officially withdrawing their three members from the Constituent Assembly. [Egypt Independent, Ahram Online, Al-Jazeera (Arabic), 11/18/2012]

Court ruling a victory for Nile University students, faculty
Following an 18-month saga, Nile University students and faculty celebrated Sunday a court ruling that annulled an earlier decision to transfer the institution’s land and buildings to Nobel Laureate Ahmed Zewail. The administrative court’s decision essentially means students and faculty can reclaim their campus in full, according to several sources who refuted media reports stating that the court only gave them rights to one building. The ruling also returned the rights to millions of Egyptian pounds worth of donations to the university. [Egypt Independent, EGYNews (Arabic), 11/18/2012]

Egypt’s Salafists launch business association to promote "ethical dealings"
At one of Cairo’s luxurious Nile side hotels, in a lavish ballroom, around a hundred Egyptian Salafists, including some of their top religious scholars, gathered to launch their Salafist movement’s first business association. Business House, a Salafist NGO established nine months ago, launched its first initiative under the name of Bader (Arabic for initiate) on Saturday aiming to help fundi small and eedium enterprises (SMEs). The event did not come across as a traditional business gathering with the venue a full house of bearded men in well-cut suits, in addition to some people wearing galabeyas (traditional Muslim dress). [Ahram Online, 11/18/2012]

Border authorities allow 400 activists to cross into Gaza
Egyptian border authorities have allowed 400 political activists to cross into the Gaza Strip to express solidarity with Palestinians, as Israeli airstrikes pounded the coastal enclave for a fifth day, organizers said. “We want the free world to stop the onslaught on defenseless civilians,” said Mahmoud Ali of the Constitution Party, according to state-owned news agency MENA. “We want to relay to the steadfast Palestinian people the support of all Egyptians.” [Egypt Independent, Shorouk (Arabic), 11/18/2012]

Egyptians march in memory of Mohamed Mahmoud victims
Fifty political groups have announced their participation in protests commemorating the clashes between police and protesters in Mohamed Mahmoud Street near the Interior Ministry last November, which left nearly 40 dead and hundreds injured. In a statement Monday, participating groups said the event “aims to … inform the common citizens of the reality behind the incidents…” Signatories to the statement included the Popular Current, the Socialist Popular Alliance, the April 6 Youth Movement and the Constitution Party. [Ahram Online, Egypt Independent, AMAY (Arabic), 11/19/2012]

Senior US senator blasts Egypt’s ‘weak’ effort on Gaza
Senior US Senator Carl Levin criticized Egypt’s "weak" efforts Sunday to pressure its ally Hamas to reduce tensions in the bloody conflict between Gaza’s Islamist rulers and their enemy Israel. "It’s pretty weak so far from what I can tell. The Egyptians have a real interest here in the region not exploding and the peace agreement continuing to be abided by," said Levin, who chairs the Senate Armed Services Committee. [Egypt Independent, 11/18/2012]

After Erdogan meeting, Morsi demands end to Israeli aggression
Egypt and Turkey agree that the international community must work to stop Israeli aggression in the Gaza Strip and that war will not lead to peace, President Mohamed Morsy said during a meeting with Turkish Prime Minister Recep Tayyip Erdogan Monday. The two leaders met at the presidential palace in Heliopolis. During the meeting, Morsy and Erdogan signed and discussed multiple bilateral cooperation agreements in multiple fields, particularly related to education. [Egypt Independent, SIS, 11/18/2012]