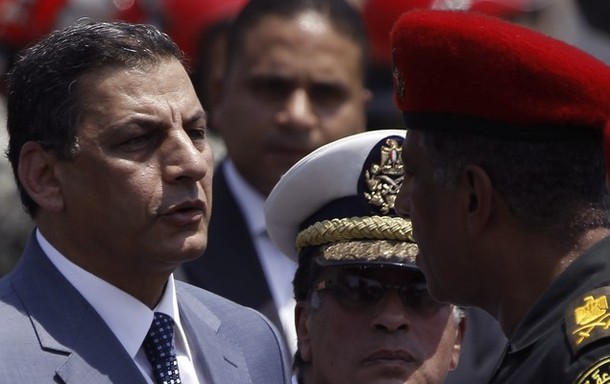 [Ahram Online, Egypt Independent, AP, EGYNews (Arabic), 8/8/2012] Tensions in Egypt’s North Sinai reached new heights in the early hours of Wednesday as Egyptian security forces engaged in battles with militants in several areas of the governorate shortly after assailants opened fire on three joint military-police checkpoints. Many checkpoints, especially in the city of Arish, saw exchanges of fire. Egyptian security troops and helicopters were reported to be combing the eastern area of El-Halal Mountain, hunting for armed insurgents. In a statement read out on state TV, the military said it has started a joint military-police ground operation in Sinai, backed by warplanes, to "restore stability and regain control" of the Sinai.

[Reuters, 8/8/2012] Egypt began to seal off smuggling tunnels into the Gaza Strip on Tuesday, a security source said, two days after gunmen shot dead 16 Egyptian border guards in an attack blamed partly on Palestinian militants. A reporter in the border town of Rafah said heavy equipment was brought to the Egyptian side of the tunnels, which are used to smuggle people to and from Gaza as well as food and fuel that are a lifeline for the small territory’s population.

[Ahram Online, 8/7/2012] Amr Darrag, secretary-general of the Constituent Assembly affirmed that all the committees have finished reviewing proposals and that by the end of the week the constitution would be drafted, in a statement on Tuesday to IkhwanWeb, the official Muslim Brotherhood website. Suggestions will be referred to the Drafting Committee this weekend to then be submitted to a general Constituent Assembly meeting for final selection, Darrag added.

[Egypt Independent, 8/7/2012] Leading Muslim Brotherhood figures on Tuesday said the group has formed committees across the country in coordination with the Salafis and Jama’a al-Islamiya in order to address extremism and avoid incidents like the Rafah attack. The committee would educate people in mosques and through advocacy caravans. Sabri Khalaf Allah, head of the Muslim Brotherhood’s administrative office in Ismailia, said the committees would preempt any extremist ideas and emphasize that Islam has a moderate approach.

[Daily News Egypt, 8/7/2012] A committee overseeing the fallout of sectarian clashes in Dahshur issued a statement on Tuesday summarising its plan of action moving forward. The statement announced that security forces would pave the way for Dahshur Christians to return to their homes “within hours,” also promising compensation for those holding property that had been looted and damaged. The committee also reiterated its full commitment to laws and judicial rulings concerning the events.

[Egypt Independent, 8/7/2012] President Mohamed Morsy reiterated through his spokesperson Egypt’s respect for international obligations and the treaties it has signed. Morsy’s statement came in response to calls for the amendment of the Camp David Accords with Israel, presidential spokesperson Yasser Ali said Tuesday evening. Former Arab League chief Amr Moussa was among many public figures who asked Morsy to amend the peace treaty between Egypt and Israel so that Egyptian troops could operate in greater numbers in the Sinai Peninsula.

Us Vows To Improve Counterterror Work With Egypt

[AP, 8/7/2012] The U.S. is vowing to improve counterterrorism cooperation with Egypt after 16 Egyptian soldiers were killed by suspected Islamist militants. Secretary of State Hillary Rodham Clinton expressed her condolences in a telephone conversation with Prime Minister Hesham Kandil. She voiced support for the Egyptian government’s efforts to strengthen security.

Last Egyptian case in Guantanamo to be reviewed

[Daily News Egypt, 8/7/2012] The United States is starting “a new process for the periodic review of certain detainees at Guantanamo” to address whether a threat to the country’s security is abrogated by their continued detention, according to the State Department. Daniel Ernst, Director and Arabic language spokesperson at the U.S. State Department’s Dubai Regional Media Hub has told the Daily News Egypt that Tarek Mahmoud Ahmed Al-Sawah, Egypt’s last prisoner in Guantanamo Bay military prison, is among those who will be considered in the periodic review.

Iran VP in Cairo to invite Morsy to summit

[Egypt Independent, 8/7/2012] Iranian Vice President Hamid Baqai arrived in Cairo Tuesday on a private jet from the Iranian capital Tehran for a two-day visit to Egypt. During the visit, Baqai will deliver Egyptian President Mohamed Morsy an official invitation from Iranian President Mahmoud Ahmadinejad to attend the Non-Aligned Movement summit to be hosted by Iran on 30-31 August.