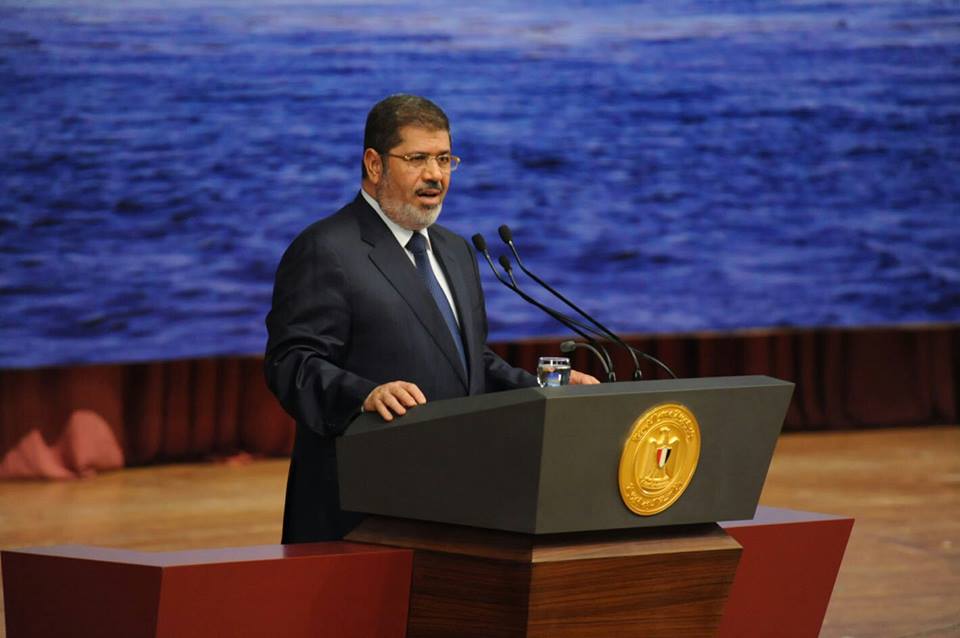 During a conference of Islamist parties discussing the Nile Dam crisis on Monday, President Mohamed Morsi urged political groups to put their differences behind them and pursue comprehensive national reconciliation to face the myriad challenges currently facing Egypt.

Egypt ‘war’ talk raises Ethiopia Nile dam stakes; FM to visit Addis Ababa
Egypt does not want war with Ethiopia but will keep "all options open", President Mohamed Morsi said on Monday during a conference of Islamist parties at Cairo’s International Conference Centre, turning up the heat in a dispute over a giant dam Addis Ababa is building across the Nile. In a televised speech to cheering Islamist supporters, Morsi voiced understanding for the development needs of poorer nations upstream in the Nile basin, but rammed home in emotive language that Egyptians will not accept any reduction in the flow of the river on which their civilization has been based for millennia. Speaking before members of the Shura Council on Monday, Prime Minister Hisham Qandil affirmed that the issue of Egypt’s access to Nile water was one of "national security" and "a matter of life and death." He added that Egypt does not approve of the dam on the basis of available data as it could pose a threat to Egypt’s water share and the volume of power generated from the High Dam. Meanwhile, Egypt’s foreign minister is to hold talks in Addis Ababa. [Reuters, SIS, Ahram Online, Egypt Independent, AP, 6/10/2013]

Morsi calls for national reconciliation; Opposition rejects call
During a conference of Islamist parties discussing the Nile Dam crisis on Monday, President Mohamed Morsi urged political groups to put their differences behind them and pursue comprehensive national reconciliation to face the myriad challenges currently facing Egypt. In response the National Salvation Front (NSF) and Dostour Party leader Mostafa al-Gendy rejected the call saying there is no longer time for negotiation and dialogue. NSF leader, Mohamed Aboul Ghar, indicated some readiness for dialogue if certain conditions were met. These include a cabinet reshuffle, the sacking of the culture and interior ministers, as well as the controversial prosecutor general. Mohamed Adel, a member of the April 6 Youth Movement’s political bureau, also announced on Tuesday his group’s rejection of a call by President Mohamed Morsi for national dialogue. Rebel campaign spokesperson Mahmoud Badr said that the president’s call for national reconciliation is an effort to distract the people’s attention from other problems, accusing him of using the crisis to boost his popularity. [Ahram Online, Egypt Independent, AP, 6/11/2013]

Tamarod proposes transitional roadmap
The Tamarod campaign plans to file a lawsuit accusing President Mohamed Morsi of “criminal impersonation” of the president as soon as they collect 15 million signatures. The campaign has prepared a transitional roadmap that they will present to the Supreme Constitutional Council (SCC) when they file the lawsuit. Campaign coordinator, Mahmoud Badr, announced through his Facebook page his refusal to meet with Catherine Ashton, High Representative of the Union for Foreign Affairs and Security Policy, stating that Tamarod was a campaign to empower the Egyptian people. Assem Abdel-Maged, a leading member of Egypt’s ultra-conservative al-Jama’a al-Islamiya movement, asserted on Sunday that the anti-government ‘Rebel’ (Tamarod) campaign planned to kill its own protesters during planned June 30 rallies in hopes of turning public opinion against President Mohamed Morsi and the Muslim Brotherhood group from which he hails. Meanwhile, Tagarod, a pro-Morsi campaign reported that it collected 10 million signatures and will hold their protests at the palace on the June 28. [DNE, AMAY, Ahram Online, 6/11/2013]

Giza court orders release of Mubarak sons in stock market case
The Giza criminal court has released former president Hosni Mubarak’s sons Alaa and Gamal pending trial in a corruption case where they face accusations of stock market manipulation. However, the two will remain in detention despite the release order as they face additional charges in court. Alaa, Gamal, and six others were referred to the criminal court for violating stock market and central bank rules to gain LE2.051 billion worth of unlawful profits through dealings in shares of Egypt’s al-Watany Bank. The brothers face additional charges of illegally using funds allocated for expenditure on presidential palaces for their private villas. [Ahram Online, AMAY (Arabic), 6/11/2013]

Egyptian Christian teacher convicted of blasphemy
An Egyptian court has convicted a Coptic Christian teacher of blasphemy but didn’t hand down a prison sentence and only imposed a fine on her. The court on Tuesday ruled that elementary schoolteacher Dimyana Abdel Nour had insulted Islam. It ordered that she pay a fine of 100,000 Egyptian pounds ($14,000). Abdel Nour was not in the courtroom for the verdict. The case had been reported by three 10-year olds to their parents saying their teacher showed disgust when she spoke of Islam in class. [AP, Shorouk (Arabic), 6/11/2013]

NGO trial verdicts must be contested in legal context
The contesting of the sentences handed down to 43 NGO workers last week needs to occur within a legal context, said Minister of Planning and International Cooperation Amr Darrag on Monday. The minister spoke at a panel addressing democracy and development as part of the US-Islamic World Forum, hosted by the Brookings Institution in Doha. “Egypt is a country that encourages civil society,” said the minister, a member of the Freedom and Justice Party. Darrag pointed to the fact that the trial had not been initiated under the current government, adding that the new NGO law which had been submitted by the presidency to the Shura Council showed “significant improvement” from the previous law that was in place under the previous regime. [DNE, 6/10/2013]

Queues for fuel cause mayhem
Across the country ongoing fuel shortages are creating long queues, snarled traffic and even gun fights, yet officials are downplaying the issue. According to al-Masry al-Youm newspaper, gunfights and scuffles have broken out over increasingly scarce fuel supplies at gas stations, with at least two reported injuries. Long queues and fuel shortages have caused uproar across governorates since January, leading to traffic jams and long queues near gas stations and roadblocks erected in protest to the crisis. Businesses and factories have also been affected by the fuel shortages, with some being forced to close. Brick and cement makers faced 75 percent increases in their gas bill after the government cut subsidies in February while their fuel oil prices rose by 50 percent. [DNE, 6/10/2013]

Police won’t protect Brotherhood HQ on 30 June: Interior minister
Police will only protect state institutions, not the Muslim Brotherhood headquarters, during opposition protests on June 30, Interior Minister Mohamed Ibrahim said on Tuesday.
The presidential guard is the only force responsible for protecting the presidential palace, Ibrahim added, but police will offer support if requested. Police will not guard the Muslim Brotherhood HQ, which also witnessed protests and violence the past few months, or those of other political parties, Ibrahim stated. The Tamarod (Rebel) campaign, calling for the June 30 protests, accused the interior ministry of failing to protect its headquarters in downtown Cairo which was torched on Friday. He added that his ministry "will not be a tool of suppression for any regime.” The Egyptian police’s sole role is to protect protesters, the state and security institutions, he explained. [Ahram Online, Egypt Independent, 6/11/2013]

Culture Ministry sit-in continues, Salafis vow to disperse protest
Artists and other demonstrators are continuing a sit-in at the Ministry of Culture, demanding the removal of Abdel Aziz as culture minister. Ballet dancers put on performances on the streets of Zamalek in front of the Ministry of Culture on Sunday night in protest of both the Minister of Culture Alaa Abdel Aziz as well as Shura Council discussions over banning ballet. Meanwhile, the Salafi Watan Party has warned its members will disperse a sit-in set up outside the Culture Ministry in Cairo on Tuesday, accusing the protesters of supporting the Mubarak-era culture minister, Farouk Hosny. Watan Party Vice President Mohamed Nour called for robust legal action against the protesters on charges of "corrupting thought," squandering public funds and disparaging God’s divinity. “They have been presenting only the most permissive and decadent of arts,” he said. Muslim Brotherhood spokesperson Ahmed Aref has joined the condemnation, demanding demonstrators be brought to trial for supposedly crossing the line. [DNE, Egypt Independent, 6/10/2013]

Clashes at Egypt-Libya Border
Four Egyptian citizens and four policemen were wounded after clashing with Libyan border guards in the city of Salloum Sunday night, reported state-owned news agency MENA. “A fight broke out after Libyan guards prevented Egyptian lorries in Salloum from crossing into Libya,” said Ahmed Fayek, a member of 6 April Movement. The residents blocked the main road to Libya for hours, until Egyptian security officers intervened and negotiated with families to try to restore calm. Normal service resumed at the border on early Monday. Salloum is Egypt’s main border crossing with Libya. [DNE, 6/10/2013]