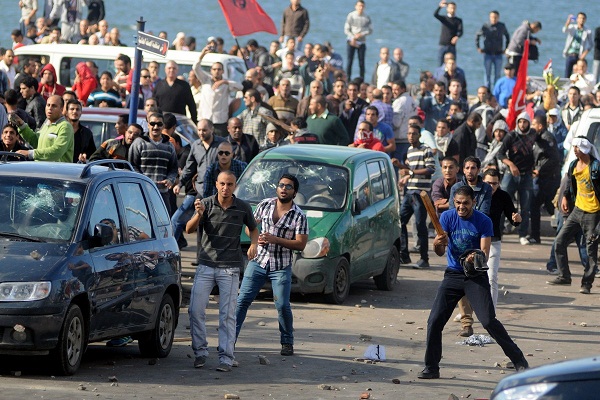 In a defensive English-language statement to the foreign press, President Mohamed Morsi defended his recent controversial decisions and listed his achievements, while harshly criticizing his opponents.

Morsi defends his actions to foreign press; calls opposition ‘counter-revolutionary’
In a defensive English-language statement to the foreign press, President Mohamed Morsi defended his recent controversial decisions and listed his achievements, while harshly criticizing his opponents. The state-run Al-Ahram website published the statement on Friday. The opposition consists of "counter-revolutionary forces aiming at destroying the gains of the revolution," Morsi claimed. The statement explained that the president could not have changed the date of the constitutional referendum, which has been the source of a major divide between Islamist and secular forces. Morsi also stated that his legislative powers would be transferred to the Shura Council if the constitution passes the referendum, and that is why he is looking for quick ways to fill empty seats on the council. [Egypt Independent, 12/14/2012]

Brotherhood refused meeting with defense minister, sources say
This week’s meeting between Defense Minister Abdel Fattah al-Sisi and political forces was cancelled due to pressure from President Mohamed Morsi’s administration, informed sources told Al-Masry Al-Youm on Friday. The Morsi administration denies the claims. "The administration and President Mohamed Morsi pressed the Armed Forces to cancel the dialogue which was planned for last Wednesday because the Muslim Brotherhood and its [Freedom and Justice] Party refused to attend the meeting, considering it an intervention on part of the Armed Forces in political life," the sources said. [Egypt Independent, 12/14/2012]

Opposition denies presidency attempts at dialogue
Vice President Mahmoud Mekky held a third national dialogue session on Thursday with a number of political figures and legal experts to discuss the new draft constitution and ways to resolve the political crisis surrounding it. The first session was on Saturday, but civilian forces rejected the president’s invitation unless he would postpone the rushed constitutional referendum in order to allow for true political dialogue. A second meeting was held earlier this week. During Thursday’s session the Committee of Experts, which was selected in the first session and chaired by former presidential candidate Mohamed Selim al-Awa, discussed proposed amendments to the draft constitution. They also discussed the nomination criteria for Shura Council membership. [Egypt Independent, Ahram Online, 12/13/2012]

General prosecutors demand dismissal of Egypt’s prosecutor-general, justice minister
Members of Egypt’s General Prosecution on Thursday called for the resignation of Prosecutor-General Talaat Ibrahim – recently appointed by President Mohamed Morsi – and the dismissal of Justice Minister Ahmed Mekki due to what they described as "threats" by the two men against General Prosecution judges. The move comes following a recent decision by Ibrahim to transfer East Cairo District Attorney Moustafa Khater to the Upper Egyptian city of Beni Suef. Khater’s transfer came after he ordered the release of scores of people detained during last week’s clashes between Morsi’s supporters and opponents outside the presidential palace in Cairo. Ibrahim later reversed the transfer decision. [Ahram Online, 12/13/2012]

‘Abundance’ of judges ask to help oversee Egypt poll: Official
Judge Ashraf Zahran, member of the justice ministry’s referendum supervision office, said that Egypt’s Supreme Committee for Supervising the Referendum had received "torrents" of requests from judges to supervise the constitutional poll slated for 15 and 22 December. According to Al-Ahram’s Arabic-language news website, Zahran said that the "abundance of requests" would ensure that each polling station had an extra 50 judges on standby. Amid fears that the referendum could be rigged as a result of a judges’ boycott, Zahran said that judges at each polling station would supervise vote-counting in the presence of media personnel and civil society organisations. He added that results of the vote count would be posted on each station’s door to ensure transparency. [Ahram Online, 12/13/2012]

Also of Interest:
HEC: Counting at the polling stations will occur ‘publicly’ immediately after the vote | Shorouk (Arabic)
Constituent Assembly: There is an organized campaign to discredit the draft constitution | EGYNews (Arabic)

World Bank promises Egypt US$1 billion loan
The World Bank plans to support Egypt’s economic reform plan with a US$1 billion loan to create new programs to reduce poverty, the delegation said at a meeting with Prime Minister Hesham Qandil on Thursday. During the meeting, Qandil briefed the delegation on developments in his 22 month-long reform plan. he delegation also said the World Bank would be willing to support the development of government institutions and strengthen the social security system. They added that Egypt’s potential to fight poverty is greater than in other countries, given Egypt’s existing infrastructure that would help implement such programs. [Egypt Independent, 12/13/2012]

Taking it to the streets
The 6 April Youth Movement has decided to spend this pivotal week educating instead of protesting. In a final push before Saturday’s referendum vote, their members have spread out around the country to hand out flyers and discuss the constitution with every group of Egyptian voters. “We have handed out more than three million flyers,” said 6 April spokesman Mohamed Adel. “We are particularly focussing on poorer and rural areas.” The main aspects which 6 April members will discuss with the public, include the treatment of social issues and rights in the constitution. Adel said that the group is also preparing for a comprehensive observer role in each governorate during tomorrow’s vote. [DNE, 12/14/2012]

Referendum opponents, supporters prepare for mass demos
A state of calm prevailed in Tahrir Square Friday morning ahead of an anticipated mass protest titled "No to Referendum," which objects to conducting the referendum tomorrow without having reached national consensus. The board of the Journalists Syndicate has called for a general assembly meeting at 3 pm, after which they are scheduled to march from the syndicate to Tahrir to denounce the killing of photojournalist Al-Husseini Abu Deif in the course of clashes in front of the presidential palace, and the practice of targeting journalists reporting on the conflict. The Muslim Brotherhood is also preparing for a mass protest in Nasr City in front of Rabaa al-Adaweya Mosque to support the draft constitution and referendum. [Egypt Independent, Ahram Online, Reuters, Shorouk (Arabic), 12/14/2012]

Carter Center says won’t supervise constitutional referendum
The Carter Center said on Thursday it would not send observers during the constitutional referendum scheduled for 15 and 22 December. “The late release of regulations for observers precludes the Center from conducting a comprehensive assessment of all aspects of the referendum process, consistent with its methodology for professional observation of elections,” the center said in a statement. At a press conference on Wednesday, the National Council for Human Rights announced that the High Judicial Elections Committee (HJEC) sent it 20,000 authorizations for civil society observers to monitor the referendum, and had granted it the power to decide which observers are to be authorized. [Egypt Independent, AP/Ahram Online, 12/13/2012]

Spain seizes assets owned by Egypt’s Mubarak
Spanish police have found 28 million euros (US$36.5 million) in assets owned by ousted Egyptian President Hosni Mubarak and people close to him, including Marbella beach properties and luxury cars, the government said on Thursday. Egypt had asked Spain to track down assets in the country belonging to the former president and more than 100 people with ties to him, including family members, people who held high-level posts in his government and business leaders. Spain’s interior ministry said it had frozen 18.4 million euros worth of the assets, but did not say whether it would also freeze the remainder. [Egypt Independent, Ahram Online, 12/13/2012]

Photo: Clashes between supporters and opponents of Egypt’s draft constitution in Alexandria (AFP)