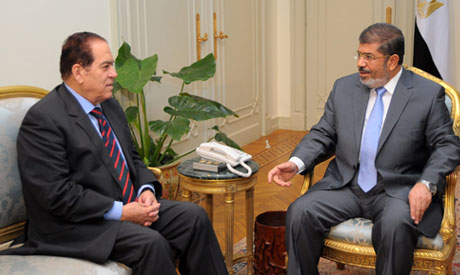 Acting presidential spokesman Yasser Ali said that President Mohamed Morsy’s statement in his Cairo University speech on Saturday regarding the return of the “elected institutions” did not necessarily mean the return of the dissolved parliament. “It means the matter would be discussed in a legal framework, even if it means new elections,” he said. Ali also said that Morsy commented on the release of Omar Abdel Rahman, who is imprisoned in the United States in connection with the 1993 World Trade Center bombings, from a human and not legal perspective.

[Ahram Online, 7/1/2012] Acting presidential spokesman Yasser Ali said that President Mohamed Morsy’s statement in his Cairo University speech on Saturday regarding the return of the “elected institutions” did not necessarily mean the return of the dissolved parliament. “It means the matter would be discussed in a legal framework, even if it means new elections,” he said. Ali also said that Morsy commented on the release of Omar Abdel Rahman, who is imprisoned in the United States in connection with the 1993 World Trade Center bombings, from a human and not legal perspective. “It was out of sympathy with Abdel Rahman’s family,” Ali said, stressing that Egypt respects the laws of other countries. “But, the human perspective can be a tool for solutions,” he added.

[Youm 7 (Arabic), Ahram Online, 7/1/2012] Newly-inaugurated Egyptian President Mohamed Morsi has issued a decision calling for 15 per cent bonuses on public-sector salaries and raising monthly social-insurance pension rates from LE200 to LE300. Neither the bonuses nor the pension increases will be taxed by the state. Morsi spokesman Yasser Ali announced the decision on Sunday afternoon, saying that the increase in pension rates would benefit over one and a half million Egyptians. Egyptian economy expert Hamed Tolba told Al-Ahram’s Arabic-language news website that Morsi’s announced pay increases would be financed from the budget’s reserve funds. Mumtaz Sa`id, Minister of Finance, said that the raise would cost the state LE3.5 billion.

[Ahram Online, 7/2/2012] Newly-inaugurated President Mohamed Morsi met with Egypt’s caretaker cabinet on Sunday to discuss the many challenges facing the country in the upcoming period. At the meeting, it was agreed that the caretaker government, headed up by Prime Minister Kamal El-Ganzouri, would continue to function until Morsi appointed a new cabinet. The three-hour meeting touched on the main planks of Morsi’s electoral programme, especially those pertaining to security, public health, bread and fuel supplies, and longstanding urban planning issues such as traffic congestion and sanitation.

[Egypt Independent, 7/1/2012]Finance Minister Momtaz al-Saeed has said that the Supreme Council of the Armed Forces has endorsed the state budget for the current fiscal year of 2012/13, as well as the laws governing economic and social development plans, adding that the budget would take effect Sunday. He added that the ministry is informing each of administration and service authorities of their financial allocations to disburse in accordance with the rules and provisions stated in Law 53/1973.

[Daily News Egypt, 7/2/2012] As the President was taking his oath of office, the Daily News Egypt and other organizations were reporting that significant weapons caches, including nearly 140 Grad rockets and 140 Grad warheads were intercepted by Egyptian State Security, bound, allegedly for Gaza. If the reports are true, the capture would be the largest seizure of weapons by the Ministry of Interior. President Morsi is in a position to have to take a stand on the enforcement of the blockade on Gaza. With what appears to be an escalation in Sinai, the president may have found the cover he needs to close the Rafah crossing without losing face among an Egyptian population eager to renegotiate the restrictions on the region.

[Daily News Egypt, 7/2/2012] Members of the Revolutionary Youth Coalition also known as the 25 January Revolution Coalition have reached the end of their road. Or so says their executive office. The alliance of multiple youth groups including April 6 Youth, the Young Muslim Brotherhood and more recently,  the National Front. The coalition intends to announce their official dissolution today at the Al-Sawy Culture Wheel in Zamelek, citing a culmination of the larger group’s aims and objectives. They aren’t splitting apart in acrimony however, the group coalesced to pressure the transition process through strength in numbers. Now that, in large part, some of their core objectives have been met, the groups will go their separate ways and continue advancing their agendas as individuals or on behalf of their original parties by participating in the political process they helped forge.

[Egypt Independent, 7/2/2012] The Freedom and Justice Party’s economic platform would restrict the state’s role to that of a motivator and coordinator for economic activity, said Hassan Malek, head of the Muslim Brotherhood-led Egyptian Society for Business Development. Malek rejected allegations that the Brotherhood is going to restore the former regime. Hussein Ibrahim, the FJP secretary general in Alexandria, said the party has yet to agree on who to nominate for minister positions. Ibrahim also discussed investment issues. He said several laws restrict investment. “The monopoly law never saw the light because of the dissolution of the People’s Assembly,” he said.

[Ahram Online, 7/1/2012] Egypt’s trade deficit soared to LE21.3 billion ($3.5 billion) in March, 95.3 per cent higher than the same month the year before, the state statistics agency said on Sunday. The total value of Egyptian exports declined an annual 9.4 per cent, falling to LE15.4 billion from LE17 billion in March 2011. The statistics agency, CAPMAS, attributed the overall fall to lessening overseas demand for Egypt’s petroleum products, garments, fertilizers, fruit and vegetables. The value of goods imported to Egypt, however, saw a dramatic climb, from LE27.9 billion in March last year to LE36.7 billion in 2012. CAPMAS figures suggest the climb in overall import values is tied to a weakening Egyptian pound and increased global prices for petrol, raw steel and wood.

[Youm 7 (Arabic), Reuters, 7/1/2012] Egypt will approach the International Monetary Fund (IMF) and other financial institutions to help get its economy back on track once new President Mohamed Mursi appoints a government, a financial adviser who helped draw up his manifesto said. The military council that took power from Mubarak rejected an agreement that Egypt negotiated with the IMF in mid-2011, then resumed talks for a $3.2 billion loan early this year. The economy contracted by 4.3 percent in the first quarter of 2011 and stagnated in the following three quarters.

[Reuters, 7/1/2012] The Egyptian government signed an agreement on Sunday with the Saudi-based Islamic Development Bank (IDB) that will provide $1 billion to finance energy and food imports, the government said in a statement. It said the agreement with the International Islamic Trade Finance Corporation, part of the IDB, was signed in Cairo by Waleed Abdul Mohsen al-Wohaib, chief executive of the institution, and Egypt’s international cooperation minister, Faiza Abu el-Naga. The finance was part of a previously announced agreement to provide Egypt with $2.5 billion.