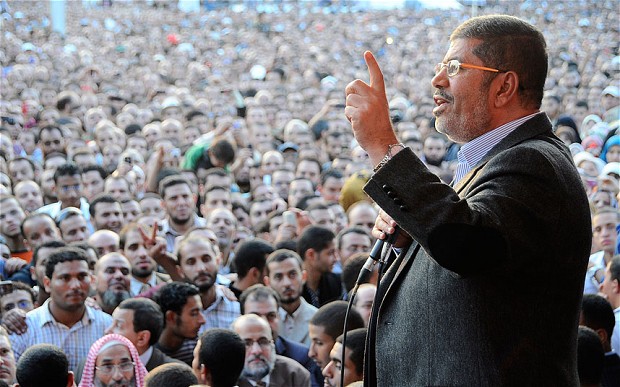 The Egyptian president’s office said on Sunday it was committed to engaging "all political forces" to reach common ground on the constitution and stressed the "temporary nature" of a decree expanding President Mohamed Morsi’s powers. President Mohamed Morsi does not plan to rescind his latest controversial constitutional declaration, but will rather offer proposals to the High Judiciary Council.

Morsi will not rescind power-consolidating decree: Source
The Egyptian president’s office said on Sunday it was committed to engaging "all political forces" to reach common ground on the constitution and stressed the "temporary nature" of a decree expanding President Mohamed Morsi’s powers. President Mohamed Morsi does not plan to rescind his latest controversial constitutional declaration, but will rather offer proposals to the High Judiciary Council and issue an explanatory addendum after the meeting, a source who asked to remain anonymous reveals to Al-Ahram Arabic-language news gate. The source further revealed that the president will make proposals that will still protect the fate of the Shura Council (parliament upper house) as well as the Constituent Assembly – whose constitutionality is currently being questioned in court. [Egypt Independent, Ahram Online, SIS, 11/26/2012]

Reactions to Morsi’s decree vary
Two members of the President Mohamed Morsi’s appointed government on Sunday disagreed over the constitutional declaration he issued at the end of last week, symbolizing the split among prominent political forces over the president’s attempt to grant himself extensive authority. Eighteen political parties and groups have called on Egyptian President Mohamed Morsi to withdraw the constitutional declaration he issued on Thursday and to reformulate the Constituent Assembly. Constituent assembly chairman Hossam El-Gheriany, under fire from liberal politicians, said he endorses president Mohamed Morsi’s constitutional decree because "it would give the assembly more time to finish its daunting task of writing the country’s new constitution." Ahmed Fahmi, chairman of the Islamist-dominated Shura Council (the upper, consultative house of Egypt’s parliament), however, seized on Thursday’s council session to criticise the declaration. [Egypt Independent, Ahram Online, 11/26/2012]

Morsi to meet senior judiciary over controversial decree
President Mohamed Morsi is set to meet with senior members of the Supreme Judicial Council (SJC) Monday afternoon in an attempt to limit the deepening crisis sparked by a constitutional declaration he issued last Thursday. Meetings on the divisive decree will take place at the same time that a sit-in and protests are being held by opponents demanding a complete cancellation of the decree, asserting it is a threat to the democratic future of the country. [Ahram Online, Reuters 11/26/2012]

Egypt’s President Morsi issues new ‘Revolution Protection’ Law
A new law for the “protection of the January 2011 revolution” was issued late Thursday night, announced by presidential spokesperson Yasser Ali in a televised statement. The new law stipulates reinitiating investigations into the killing and attempting killing of protesters during last year’s uprising that deposed former President Hosni Mubarak. The law also provides for the creation of a revolution protection prosecuting body with nation-wide departments. The new law is officially in effect, but will be reviewed by the incoming parliament after it is elected for feedback. [Ahram Online, Egypt Independent, 11/23/2012]

Six more Constituent Assembly members resign after Morsi decree
Six more members of the Constituent Assembly withdrew from the body in the two days since President Mohamed Morsi issued a new constitutional declaration Thursday, bringing the total number of resigned original and reserve members to 29, according to the state-run Sawt al-Shaab television station. On Sunday, Mohamed Anwar al-Sadat, president of the centrist Reform and Development Party, said he would freeze his assembly membership until the body met the demands of political forces opposed to the new constitutional decree. [Egypt Independent, 11/25/2012]

Egypt court receives 12 challenges to Morsi’s decree
An Egyptian court has received 12 legal challenges to President Mohamed Morsi’s decree that has prompted violent clashes and a drop in the country’s stock market. In their appeals, plaintiffs accused Morsi’s decree of lacking constitutionality and disregarding the law that he pledged to respect upon taking office. They accused the decree of attempting to topple the rule-of law, make Morsi a God whose decisions cannot be reviewed and build a dictatorship unlike any other Egypt has ever witnessed. The Egyptian administrative court is set to hear the case against the president’s decree on Dec 4. [Reuters, Aswat Masriya, Arabiya, 11/26/2012]

Morsi declaration could stall Egypt-IMF loan: Source
Egypt’s $4.8 billion loan from the International Monetary Fund (IMF) could be delayed due to instability following President Morsi’s Constitutional Declaration. A senior IMF official, who requested anonymity, told Ahram Online on Sunday that the development could bring into question the stability of state institutions and raise doubts that could delay the loan. The IMF announced last week it had reached a staff-level agreement with Egypt regarding the loan. [Ahram Online, 11/25/2012]

EGX loses 29.3bn, 3rd highest loss in history
Egypt’s stock market plunged on Sunday in its first day open since Islamist President Mohamed Morsi seizure of new powers set off street violence and a political crisis, unravelling efforts to restore stability after last year’s revolution. The stock market fall of nearly 10 percent – halted only by automatic curbs – was the worst since the uprising that toppled Hosni Mubarak in Feb 2011. "Investors know that Morsi’s decisions will not be accepted and that there will be clashes on the street," said Osama Mourad of Arab Financial Brokerage. [SIS, DNE, Reuters, 11/26/2012]

Market makes modest recovery as board meets over fluctuations
A statement by the Egyptian Exchange, a copy of which was obtained by Egypt Independent, said the stock market’s board had held a meeting earlier Monday to assess the current situation and discuss means to address further fluctuations, but that trading would not be suspended. Stock Market chairman Mohamed Omran said in the statement that a suspension of trading is not on the table, noting that the board is anxious to ensure free access by buyers and sellers to the market based on rules for offer and demand, as well as to ensure regularity of the trading process. [Egypt Independent, 11/26/2012]

Morsi issues law paving way for Brotherhood control of trade federation
Without any formal announcement, President Mohamed Morsi ratified on Saturday a law that allows the government to appoint its loyalists to the Egyptian Trade Union Federation (ETUF). According to the new law, the manpower minister, who is affiliated with the Muslim Brotherhood, may appoint workers who are members of the group in leadership positions that would become vacant in the ETUF, which has always been affiliated with the government. [Egypt Independent, Ahram Online, 11/26/2012]

FJP website: Brotherhood teen dead in Damanhour clashes
A teenage boy, Islam Fathy Massoud, died in clashes between angry residents of Damanhour and members of the Muslim Brotherhood on Sunday night. Fifteen-year-old Islam, whom the Freedom and Justice Party website said Sunday night belonged to the Muslim Brotherhood, died when he was hit in the head with a rock, and 60 others were injured. Former parliament speaker and FJP chairman, Saad El-Katatni, stated Monday that the death of one of the party’s members in clashes in Damanhour, along with the burning of the party’s offices, confirms that "there are those who want to spread chaos in Egypt." Egyptian President Mohamed Morsi expressed his condolences on Monday for the death of Mohamed Mahmoud Street protester Gaber Salah and Islam Massoud. [Egypt Independent, Ahram Online, 11/26/2012]

267 detained in connection with Mohamed Mahmoud clashes
Security forces have arrested 267 people as of Sunday morning in connection with the clashes between protesters and security personnel in the area surrounding Mohamed Mahmoud Street, the Interior Ministry said. The ministry also claimed that 164 policemen have been injured in the fighting. He denied policemen were involved in shooting protesters with birdshot near the ministry, saying police only use tear gas to separate demonstrators and hold them back. On Sunday, military engineers put up a concrete wall in Cairo’s Qasr al-Aini Street on Sunday to prevent confrontations from reaching state installments. [Egypt Independent, 11/26/2012]

Journalists Syndicate General Assembly denounces Morsi decree
The general assembly of the Egyptian Journalists Syndicate on Sunday voiced its rejection of President Mohamed Morsi’s constitutional declaration, threatening to stage a general strike in retaliation against Morsi’s ​divisive Thursday declaration. "The general assembly announces its total rejection of the latest decisions issued by the president," Gamal Fahmi, member of the syndicate’s executive board, shouted to hundreds of journalists at the syndicate’s downtown headquarters. The president’s decisions "represent naked aggression against general freedoms, the rule of law and the independence of the judiciary," he added, as fistfights erupted around him between supporters and opponents of the syndicate’s head Mamdouh El-Wali. [Egypt Independent, Ahram Online, 11/25/2012]

Brotherhood organises mass rallies to support Morsi decree, Opponents to protest
Thousands of Muslim Brotherhood and Salafist supporters took to the streets of Kafr Al-Sheikh governorate on Sunday evening to support President Mohamed Morsi’s controversial decree. Meanwhile, Salafist figures and ex-parliamentarians of the Muslim Brotherhood’s Freedom and Justice (FJP) party marched in Assiut, upper Egypt, with thousands of their supporters to express their solidarity. Meanwhile, the Muslim Brotherhood declared that it would move its mass demonstration planned for Tuesday from downtown’s Abdeen Square to Cairo University headquarters to avoid clashes with a rival demonstration planned to take place in Tahrir Square. [Ahram Online, DNE, Reuters, 11/25/2012]

Merkel expresses concern over developments in Egypt, France calls on Europe to convince Morsi to backtrack
German Chancellor Angela Merkel expressed concern about the latest developments in Egypt after President Mohamed Morsi announced a new constitutional declaration Thursday. German government spokesperson Steffen Seibert said on Monday in Berlin that the separation of the powers of government, parliament and the judiciary is one of the basic rules of any democratic constitution. European partners plan to discuss the issue with each other as well as with Egyptian authorities, spokesperson Philippe Lalliot said in statements published on the French Embassy in Cairo’s website Monday. [Egypt Independent, 11/26/2012]

John McCain warns of Islamist or military takeover in Egypt
Egypt could become an Islamist state or face another military takeover if President Mohamed Morsi’s judicial power grab is left unchecked, US Senator John McCain warned Sunday. McCain, the 2008 Republican presidential nominee, urged President Barack Obama to be prepared to use billions of dollars of American aid as leverage to force Egypt’s first Islamist leader to change course. On Friday, the US State Department said the decree "raise[s] concerns for many Egyptians and for the international community" and called "for all Egyptians to resolve their differences over these important issues peacefully and through democratic dialogue." [Egypt Independent, Ahram Online, DNE, 11/26/2012]

Hamas delegation in Cairo for mediation over truce details
A Hamas government delegation will hold talks Monday with Egyptian officials in Gaza to follow up on the recently declared truce between the movement and Israel. The delegation, presided over by Deputy Prime Minister Zeyad al-Zaza, arrived in Cairo Sunday evening to hold indirect talks with Israel through Egyptian mediators over details of the truce. [Egypt Independent, Aswat Masriya/Reuters, 11/26/2012]