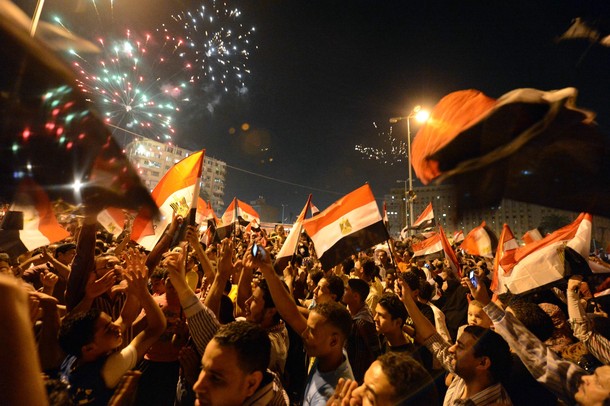 President-elect Mohamed Morsy moved into the office once occupied by ousted leader Hosni Mubarak and started consultations Monday over the formation of his presidential team and a new government, an aide said. Many supported Morsy as a representative of the uprising that toppled the old regime and a chance to challenge the military.

[Ahram Online, 6/24/2012] Morsy wins the presidency of a deeply divided nation with 52 percent of the vote, with lower Egypt’s Nile Delta giving for Shafiq, while impoverished Upper Egypt put the Muslim Brotherhood’s candidate on top. Upper Egypt saw the lowest turnout while the greater Cairo area recorded the highest. Turnout countrywide edged up past 50 per cent in the second round of the historic presidential election.

Shafiq: Polling results should be respected

[Egypt Independent, 6/25/2012] Defeated presidential candidate Ahmed Shafiq has said that professionalism requires respect for rivals, urging his winning competitor Mohamed Morsy to work on restoring security to the country. Shafiq said he respects the outcome of the election. He also thanked his supporters and vowed to always be at their service. The former Mubarak-era minister said he would consider utilizing his supporters’ base to form a political entity if they offered the chance to him. Shafiq said Morsy should consider security a major problem that needs to be solved. He warned that the deteriorating security situation would prevent the flow of investments into the country.

FJP leader: President-elect to be sworn in before constitutional court

[Al Shorouk (Arabic), Egypt Independent, 6/25/2012] A senior Freedom and Justice Party leader has said that the party’s presidential candidate, Mohamed Morsy — who on Sunday was declared Egypt’s new president — would swear in before the Supreme Constitutional Court. Sobhi Saleh, the former deputy chairman of the People’s Assembly Constitutional and Legislative Affairs Committee, told state-run news agency MENA that swearing in before the court would not mean that Morsy would recognize its recent ruling to disband the assembly. Earlier news reports had quoted FJP officials and members of Morsy’s electoral campaign as stressing that the new president would be sworn in before Parliament. Saleh said the new president would not decide on the assembly’s dissolution before the court’s verdict is referred to the Supreme Administrative Court for legal interpretation. Al Masry Al Youm also reports Brotherhood leaders exploring the possibility of the ceremony occurring in front of the Shura Council.

[Al Masry Al Youm (Arabic), Ahram Online, 6/24/2012] The cabinet headed by Prime Minister Kamal El-Ganzouri is to submit its resignation to the military junta on Monday following the announcement yesterday that Mohamed Morsy won Egypt’s presidential election, according to a government source. The ruling military will not accept the resignation immediately, however, rather it will pass the responsibility to president-elect Morsy who will accept or reject it after he is sworn into office. The government source also revealed that if Ahmed Shafiq had won the election, the cabinet would have delayed the decision to submit its resignation.

[Egypt Independent, 6/25/2012] President-elect Mohamed Morsy moved into the office once occupied by ousted leader Hosni Mubarak and started consultations Monday over the formation of his presidential team and a new government, an aide said. Many supported Morsy as a representative of the uprising that toppled the old regime and a chance to challenge the military. But Morsy was equally feared among youth groups behind the uprising that campaigned for a secular democratic state, and among many belonging to the country’s Christian minority. In an effort to rally support and heal national divisions, Morsy vowed to appoint diverse deputies, including a woman and a Christian. He also has reached out to other presidential hopefuls who garnered popular support in the first round of the election. He has also promised he would nominate a non-Brotherhood member to head the government.

[Egypt Independent, 6/25/2012] Judge Ahmed al-Fiqqi told Al-Masry Al-Youm that his department didn’t receive any request from former People’s Assembly Speaker Saad al-Katatny asking for a legal opinion on the Supreme Constitutional Court’s verdict, which deemed a third of the assembly seats unconstitutional. Fiqqi said the ruling was made by the country’s top judicial body and therefore cannot be challenged before any other court. He said his department cannot decide on its ability to consider the issue before receiving an official letter and viewing its content. He said the ruling military council’s enforcement of the court verdict was an executive measure with no legal dimension that can be relied upon. Former MPs, such as the Wasat Party’s Essam Sultan and lawyer Nizar Ghorab, joined Katatny in filing a complaint challenging the Supreme Constitutional Court’s jurisdiction and the constitutionality of the ruling military council’s decision to dissolve Parliament in an administrative court that will hear the case on Tuesday.

[Ahram Online, 6/25/2012] Egyptian stocks ended the day with a 7.59 percent hike in the first trading session since Mohamed Mursi was officially named Egypt’s president-elect. The market started Monday on a positive note. The benchmark EGX30 soared 5.65 per cent just 40 minutes into Monday’s trading session. Later on the day, the exchange suspended trading for half an hour after the benchmark index surged 6.7 percent, in line with stock market rules. Once trades resumed, the market followed its surge and reached 6.8 percent just before 1pm Monday.

[DNE, 6/25/2012] Within hours of the announcement of the election of Mohamed Morsy as president-elect of Egypt, congratulation began pouring in from leaders around the world. A brief summary of communications with Bahrain, the UAE, Kuwait, Gaza, Israel, Turkey, and the UK can be found in the article. The US has also offered it’s congratulations with a phone call from President Obama to Mohamed Morsy.

Morsy says he wants to expand ties with Iran

[Egypt Independent, 6/25/2012] President-elect Mohamed Morsy said in an interview with Iran’s Fars news agency published on Monday that he wanted to expand ties with Tehran to create a strategic "balance" in the region. Diplomatic relations between the two countries have been severed for more than 30 years, but both sides have signaled a shift in policy since former President Hosni Mubarak was overthrown last year in a popular uprising. Morsy’s comments may unsettle Western powers as they seek to isolate Iran over its disputed nuclear program, which they suspect Tehran is using to build atomic bombs. They cautiously welcomed the democratic process that led to Morsy’s election, but made clear Egypt’s stability was their main priority.