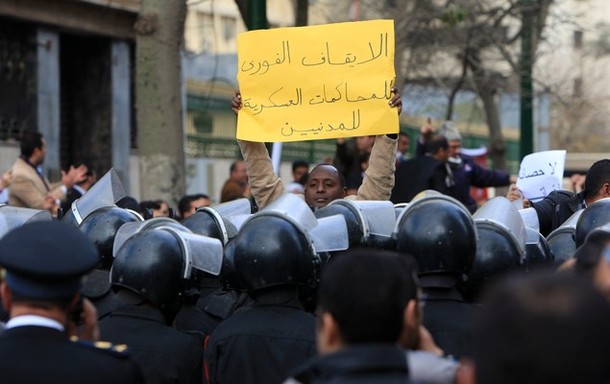 Major General Adel Morsy, head of the military judiciary, has said that there are no political prisoners in military prisons and that the military judiciary does not have authority to arrest civilians. “Whoever claims the contrary must prove it,” he said. Morsy’s statement came in response to the calls demanding that President Mohamed Morsy grant amnesty to political prisoners.

[Egypt Independent, 7/18/2012] A senior Muslim Brotherhood leader in the Constituent Assembly, Sobhi Saleh, has said that the country’s new constitution would be ready by the end of the holy month of Ramadan, which is likely to begin of Friday. Sub-committees at the Constituent Assembly will begin to draft Articles of the constitution next week, Saleh told the website of the state-run paper Al-Ahram. He predicted the draft would be put to a referendum after the feast. Saleh said that the assembly approved of a semi-presidential system, similar to the system in France. He added that powers will, consequently, be divided between the president and the government, and that the parliament will monitor the government.

[El Watan (Arabic), Daily News Egypt, 7/18/2012] The court postponed the rulings on the Constituent Assembly and the Supplementary Constitutional Decree to Thursday, when it will decide on whether or not to transfer the assembly case to another bench. It also ruled to transfer the cases of and the dissolution of the Shura Council and the People’s Assembly to the State Commissioner’s Authority which will write reports on the case to help the court make a ruling. The rulings were not read by the judges who instead sent a court clerk to read the list out to a court room full of hundreds of Muslim Brotherhood supporters and protesters while thousands more gathered outside the building, complete with a stage and a microphone.

[Egypt Independent, 7/17/2012] Major General Adel Morsy, head of the military judiciary, has said that there are no political prisoners in military prisons and that the military judiciary does not have authority to arrest civilians. “Whoever claims the contrary must prove it,” he said. Morsy’s statement came in response to the calls demanding that President Mohamed Morsy grant amnesty to political prisoners. “There are 2,000 civilians in military prison for criminal offenses out of 11,867 who were tried by the military after the revolution,” he explained. “Those are not political prisoners.” The major general called on the media not to discuss cases until a final verdict is issued in them.

[Al Ahram (Arabic) Egypt Independent, 7/18/2012] President Mohamed Morsy began meeting with Prime Minister Kamal al-Ganzouri and his Cabinet Wednesday afternoon as part of consultations over the formation of his own government, state-run MENA news agency said. State-owned paper Al-Ahram described the meeting as “urgent,” adding that it may be followed, within hours, by the announcement of a new prime minister. Ganzouri is expected to submit a report to Morsy about problems his government has tackled, as well as other outstanding issues, according to Al-Ahram. The report also includes timelines and financial plans for addressing those unsolved problems.

[Ahram Online, 7/18/2012] Some 2000 members of Egypt’s Ultras Ahlawy – hard-core fans of the Ahly football club – were attacked on Tuesday by unknown assailants in front of the Egyptian Journalists Syndicate’s Cairo headquarters only minutes before they were due to hold a press conference at which they had promised to reveal "secrets" about February’s Port Said stadium disaster. The Ultras Ahlawy consequently called off the scheduled news conference amid growing tension between members and Egyptian authorities. The Ultras had staged a protest march earlier in the day. Members of the Ultras Ahlawy remain angry over what they see as the authorities’ reluctance to punish the culprits of Egypt’s worst-ever football tragedy, which left dozens dead and hundreds injured in February.

[Egypt Independent, 7/18/2012] An Egyptian security official on Wednesday denied the involvement of police in the killing of a detainee late last week. The victim’s family claims he was tortured to death at Misr al-Qadeema police station, prompting dozens of people on Tuesday to attack the station. Ayman al-Saeedy, the head of the police station, told reporters that the man was arrested when he was caught stealing several days ago. He alleged that the suspect suffered from breathing problems and died upon arriving at the hospital. The website of the privately owned newspaper Youm7 reported on Friday that 50-year-old Mohie al-Sharkawy, who was accused in a drug-related case, had died at a police station due to circulatory failure.

[Al Masry Al Youm (Arabic), Associated Press, 7/18/2012] Egypt’s top intelligence agency, long a secretive power behind the country’s ruling system, is taking a small but unprecedented step out of the shadows in an apparent attempt to win the public’s support in the face of potential challenges from the new Islamist president. In an unusual move, the General Intelligence Service – known as the "Mukhabarat" in Arabic – released a 41-minute-long documentary boasting of its achievements, presenting itself as the defender of the nation and vowing to continue to protect the country. The documentary, aired late last week on private and state-run Egyptian TV stations, also plays heavily on widespread anti-Israel sentiment among Egyptians, saying the agency has protected Egypt from plots by Israel and its Western allies.

[Egypt Independent, 7/18/2012] Field Marshal Hussein Tantawi met with Commander of the US Central Command James Mattis and the delegation accompanying him on Wednesday. They discussed the developments in the region and bolstering military cooperation between the two countries. Sami Anan, chief of staff of the Armed Forces and deputy head of the Supreme Council of the Armed Forces, also met with Mattis. They discussed several issues of common interest between the millitaries of the two countries, according to the state-run news agency MENA. A number of Armed Forces leaders and US Ambassador to Egypt Anne Patterson also attended the meetings, MENA reported.

[Daily News Egypt, 7/17/2012] The offices of a large refugee group in Cairo deals with the living causalities of the civil war. Refugees from the violence are arriving in Egypt by the hundreds daily and are facing challenges leaving behind the living images of the war they have escaped. An average of 20 to 50 Syrian families are arriving every day in Egypt as the violence and destruction escalates in Syria, with more than 10,000 refugees currently seeking asylum in Egypt, a refugee legal aid team in Cairo who preferred to remain nameless to protect the families it serves reported in an exclusive meeting with the Daily News Egypt. Members of legal aid team have had their names changed for the article in order to protect their identities as well.