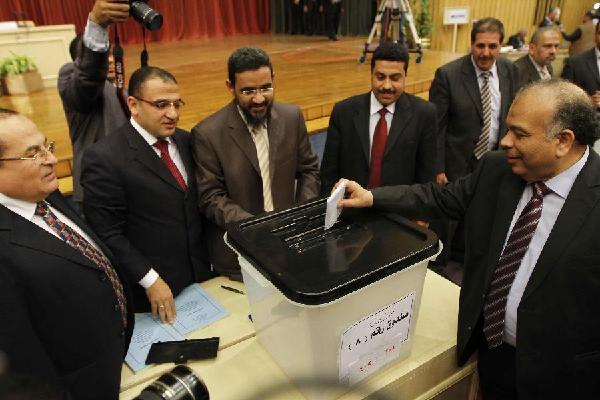 A mere 24 hours before electing the 100 members of Egypt’s Constituent Assembly tasked with drafting a new constitution, The Egyptian Bloc parties – which include the Free Egyptians party, the Egyptian Social Democratic Party and the leftist Tagammu Party – announced on Monday that they would withdraw from the body so as to allow their seats to be filled by young, female and Christian representatives.

Egypt presidency race haunted by tit-for-tat ‘Camel Battle’ claims
[Ahram Online, English, 6/11/2012]
Only days before Egypt’s presidential runoff, candidates are pelting each other with allegations. One of the most remarkable of these is the claim by Ahmed Shafiq, presidential finalist and Mubarak’s last prime minister, that the Muslim Brotherhood had killed and injured anti-regime protesters in Cairo’s Tahrir Square during the infamous "Battle of the Camel," which took place at the height of the popular uprising that led to the ouster of president Hosni Mubarak. Shafiq claimed that Muslim Brotherhood members had been seen atop buildings overlooking the square, from where they hurled Molotov cocktails on protesters below.

Egypt’s Shura Council uses NDP-regime tactics: Press syndicate members
[Ahram Online, English, 6/12/2012]
Seven board members of the Journalists’ Syndicate withdrew from a Sunday meeting with the speaker of Egypt’s Shura Council, Brotherhood MP Ahmed Fahmy, after objecting to the upper house’s "excessive" interference in the Supreme Press Council, responsible for appointing editors-in-chief of state-owned media. The upper house of Egypt’s Parliament, which is dominated by the Muslim Brotherhood’s Freedom and Justice Party (FJP) and the Salafist Nour Party, oversees the press council, of which the syndicate board is a part. The objecting board members consequently demanded a new mandate of how key editors are chosen, in order to reduce the influence of the Islamist forces, who hold the majority of seats in the upper house. A statement signed by almost a thousand journalists was presented at the meeting, accusing the Shura Council of implementing the same controlling tactics of former president Mubarak’s now defunct National Democratic Party.

Egypt Parliament votes on constituent assembly membership
[Ahram Online, English; Al Youm Al Sabi`, Arabic, 6/12/2012]
Membership in the hotly debated constitutent assembly will be decided Tuesday during a joint session of Parliament’s upper and lower houses (the Shura Council and People’s Assembly respectively). Out of about 1,300 nominated candidates, 100 members will be chosen for the body tasked with drafting Egypt’s post-uprising constitution. By the end of Monday’s meeting, liberal and leftist parties, including the Egyptian-bloc, staged a second walkout, giving up their seats to register their opposition to Islamist domination of the assembly and allow for women, youth and Coptic Christian to have a greater presence. Cairo’s High Constitutional Court announced its withdrawal from the constituent assembly tasked with drafting Egypt’s constitution on Tuesday. Maher Samy, vice president and spokesman of the court announced in a press statement that their decision came in response to conflicts among political forces, stressing that the High Constitutional Court does not want to be forced to take sides.

Egypt Islamists draft code to boost Islamic banks
[Ahram Online, English, 6/12/2012]
The political party of Egypt’s Muslim Brotherhood, which has the biggest bloc in parliament, is proposing changes to the banking law with the goal of boosting the market share of Islamic banks to 35 per cent in five years from 5 per cent now, a party member said. Ahmed al-Najjar, a member of the Freedom and Justice Party’s economic committee, told Reuters that the proposals envisaged a new Islamic banking section being added to the law, which now has no specific regulations covering Islamic banks. According to a copy of the proposals obtained by Reuters, each Islamic bank would be required "to form an independent sharia (Islamic law) authority" with no less than three sharia experts who were registered with the central bank. Each expert would be allowed to serve with a maximum of two banks in Egypt. These sharia boards would supervise the banks’ activities. Draft amendments to the law have been presented to parliament but no date has been set to discuss them, he said. Islamic banks would be requested to create sharia-compliant instruments and a money market for surplus cash, according to the draft amendments.

Financial corruption trial for Mubarak’s sons to begin 9 July
[Egypt Independent, English, 6/12/2012]
The Cairo Court of Appeals has set 9 July as the start date for the trial of Alaa and Gamal Mubarak, sons of the ousted president, and seven others on financial corruption charges. The Public Prosecution has referred the defendants to criminal court on charges of making illegitimate gains through the sale of Al Watany Bank of Egypt. Saeed said the defendants had violated trading rules set by the stock market and the Central Bank by seizing a controlling interest in Al Watany’s shares without registering it on the stock market. On 2 June, the Cairo Criminal Court acquitted Alaa and Gamal Mubarak of other counts of financial corruption, but authorities said the pair would remain in prison pending trial over the current charges.

Italy seizes Egyptian boat with 60 undocumented immigrants
[Egypt Independent, English; Al Shorouk, Arabic, 6/12/2012]
Italian authorities said they seized on Monday an Egyptian boat carrying 60 undocumented immigrants, including 15 below the age of 18. Two police boats followed the Egyptian one, whose captain tried to escape. However, police stopped the boat and accompanied it to the Italian coast. The immigrants were then transferred to the harbor, where their identities are being checked so Italian authorities can take appropriate legal measures.