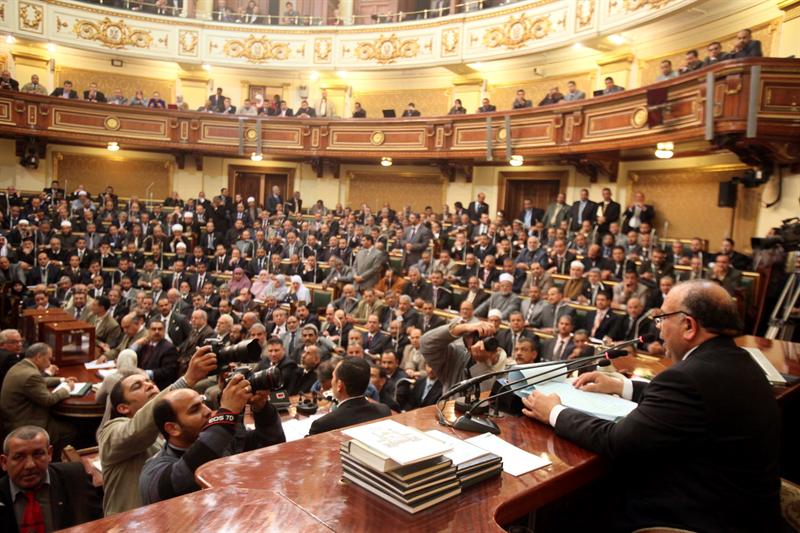 People’s Assembly Speaker Saad al-Katatny announced on Tuesday night the names of the Constituent Assembly members who would draft Egypt’s new constitution. Katatny said that 575 Parliament members voted out of 678 members from both houses of Parliament, an 84.8 percent participation rate. He said that 17 ballots were invalid, leaving 558 votes to determine the makeup of the assembly. Katatny said that the first session of the assembly would be held this week and that he will announce the time and location of the session in the coming days. He said that any appeal against the composition of the assembly will be respected, adding that Parliament respects the judiciary and its verdicts.

Bagato: Elections to be repeated with 12 candidates if the Court refuses to hear the case

Hatem Bagato, the secretary general of the Presidential Election Commission (PEC), said that if the Supreme Constitutional Court does not accept the referral of the political isolation law, or rules that the law is in fact constitutional, then the proper course of action would be to repeat the elections with 12 candidates excluding Ahmed Shafiq. He added that the election would have no additional candidates other than the original ones from the first round. Bagato said he did not expect the Court to refuse the case. He stressed that PEC’s decision regarding Shafiq’s inclusion in the race was in the public interest and to protect the position and the status of the office of the president. The PEC had every right to refer the two laws to the Supreme Consitutional Court on the basis of its hybrid administrative/judicial nature. Bagato added that the runoff preparations will continue as planned.

A Presidential Elections Commission (PEC) official said giving voter lists to a candidate would be illegal in response to protests following Muslim Brotherhood presidential contender Mohamed Morsy’s request for the information. PEC Secretary General Hatem Bagato, in a phone interview with CBC satellite channel on Tuesday, expressed disappointment over Muslim Brotherhood-organized demonstrations against the commission. Morsy’s backers, along with supporters of former candidate Abdel Moneim Abouel Fotouh, protested Tuesday in front of the commission office in Heliopolis, demanding a copy of the list of registered voters to guard against electoral fraud in this weekend’s runoff vote. The Freedom and Justice Party’s legal committee had filed a lawsuit with an administrative court to compel military council chief Field Marshal Hussein Tantawi and PEC head Farouk Sultan to provide a list of registered voters to prove no ineligible voters are included, such as army and police personnel.

A number of Islamic Jihad leaders announced Tuesday that they will support Ahmed Shafiq, Hosni Mubarak’s last prime minister, in the presidential runoff against the Muslim Brotherhood’s Mohamed Morsy. They also announced that the movement will launch a political party called Democratic Jihad. Sabra Ibrahim, deputy founder of the party, told Al-Masry Al-Youm that the leaders announced their support for Shafiq out of fear that the state would be transformed from a civil state to a theocracy headed by the Muslim Brotherhood’s supreme guide if Morsy wins. Yasser Saad, an Islamic Jihad leader, said that the civil state represented by Shafiq is the opposite of the theocratic state the Brotherhood desires.

Minister of Justice Adel Abdel Hamid issued decree 4991/2012 granting military police and intelligence officers to arrest non-military persons until the enactment of the new constitution. The Attorney General has issued instructions to all members of the Office of the Prosecution across the country not to apply the provisions of the Emergency Law as of May 31, 2012, the date set by law for the end of the state of emergency, and to refer all related crimes that were concerned with the Emergency State Security Courts to the normal courts for crimes and misdemeanors. Excerpts of the text of the decree are included in this article.

People’s Assembly Speaker Saad al-Katatny announced on Tuesday night the names of the Constituent Assembly members who would draft Egypt’s new constitution. Katatny said that 575 Parliament members voted out of 678 members from both houses of Parliament, an 84.8 percent participation rate. He said that 17 ballots were invalid, leaving 558 votes to determine the makeup of the assembly. Katatny said that the first session of the assembly would be held this week and that he will announce the time and location of the session in the coming days. He said that any appeal against the composition of the assembly will be respected, adding that Parliament respects the judiciary and its verdicts. A committee made up of members of the People’s Assembly and the Shura Council began the vote counting process after members of both houses voted on the nominees for the Constituent Assembly during their joint meeting on Tuesday. The committee was headed by Independent MP Mahmoud al-Khodairy, head of the People’s Assembly’s Legislative Committee. Wafd Party head Al-Sayed al-Badawy issued a decision to freeze the membership of six Wafd Party MPs after they abstained from voting for the Wafd Party Constituent Assembly candidates.

Jama’a al-Islamiya on Tuesday said it has prepared a draft constitution that it plans to submit it to the Constituent Assembly when the constitution-drafting body convenes its first session. MP Aamir Abdel Rahim, spokesperson for the Islamist organization’s Construction and Development Party, told Al-Masry Al-Youm that the goal is to provide assistance, not to impose the proposal, and that it would not lead to any disputes. He said the group’s representatives in the assembly, Mohamed Mahsoub and Mohamed Nagy Derbala, will submit the draft for consideration. Abdel Rahim said he expects the parties that withdrew from the Constituent Assembly in protest of its make-up to return, saying their withdrawal was an unjustified objection that will not affect the panel’s work.

Major Mamdouh Shahin, a member of the Supreme Council of the Armed Forces, has said he intends to withdraw from the constituent assembly due to the absence of a national consensus on its composition, an official source told Ahram Online Wednesday. Fifty-seven MPs reportedly withdrew from Tuesday’s joint parliamentary session on the issue in opposition to what they said was the unfair distribution of seats on the assembly to Islamists.

Egypt’s military judicial authorities demanded that the parliamentary immunity of Ziad El-Eleimy be lifted, after he allegedly branded the country’s de facto ruler a “donkey”, state-run news agency MENA reported on Tuesday. El-Eleimy’s immunity must be lifted if he is to be summoned for questioning over his scathing criticism of Mohamed Hussein Tantawi, head of the ruling Supreme Council of the Armed Forces (SCAF). The MP’s comments about the ruling military council in February caused an outcry in parliament, after he referenced a famous Egyptian proverb in which Tantawi was allegedly characterised as a “donkey,” considered a grave insult in Arabic culture. El-Eleimy has staunchly defended his statements, stressing that his use of the proverb was simply meant to imply that the military council should be held accountable for its perceived mismanagement of Egypt’s post-revolution political transition, and for its failure to prevent the violence at a football match at Port Said Stadium on 1 February, which left dozens dead.