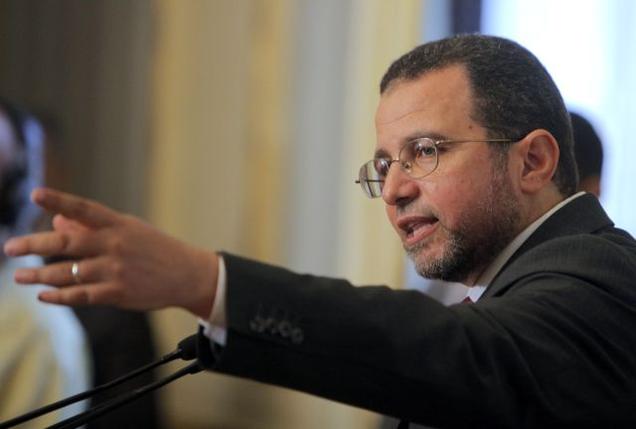 The Cabinet is preparing a draft law that would impose harsher penalties against sexual harassment, Prime Minister Hesham Qandil said Monday, adding that it was a phenomenon that was “extraneous” to Egyptian society.

PM: Govt preparing law for stricter sexual harassment penalties
The Cabinet is preparing a draft law that would impose harsher penalties against sexual harassment, Prime Minister Hesham Qandil said Monday, adding that it was a phenomenon that was “extraneous” to Egyptian society. “We have to address the phenomenon as a catastrophe that threatens society and is indicative of declining values,” the prime minister said on his Facebook page. [Egypt Independent, 10/22/2012]

Govt preparing law to regulate gifts received by former officials
The government is preparing a draft law to regulate the handling of in-kind gifts presented to official Egyptian delegations, according to state-run newspaper Al-Ahram. The proposed law, titled “Clash of Interests and the Job’s Code of Honor,” would put gifts given to former officials up for auction and regulate the retention of personal gifts by obliging the recipients to pay their market value to the state treasury. [Egypt Independent, 10/22/2012]

El-Katatni calls for unity with opposition
On Saturday, newly-elected head of the Freedom and Justice Party (FJP), Saad El-Katatni expressed his intention to unite with prominent political figures such as Mohamed ElBaradei, Hamdeen Sabbahi and Abdel-Moneim Abul-Fotouh in order to overcome recent disputes that came to the surface following the 12 October protest dubbed "Accountability Friday". [Ahram Online, 10/21/2012]

TV host accused of libeling judges released on bail
Well-known journalist and TV host Wael al-Ibrashy was released on LE100,000 bail after being interrogated for eight hours on charges of libeling the judiciary, state news agency MENA reported Sunday. Ibrashy is among dozens of TV hosts and journalists who are being interrogated by an investigating judge after hundreds of judges complained about what they call “a systematic attack” against the judiciary by media figures. [Egypt Independent, 10/22/2012]

Al-Azhar rejects Constituent Assembly proposal to elect grand sheikh
A Constituent Assembly member submitted a proposal Saturday for the article on Al-Azhar to include provisions for electing the Grand sheikh and determining an age for his retirement, which was rejected by Al-Azhar’s representatives within the assembly. Article 4 of the draft put forward by the assembly states that Al-Azhar is an independent institution, whose Grand Sheik is irremovable, but refers the selection of the Sheikh to the law. [Egypt Independent, 10/20/2012]

Minister: LE80 billion needed to complete sanitary drainage network
The government needs LE80 billion to continue building the country’s sanitary drainage network and about 15 years to implement the project, if the money is available now, Drinking Water and Sanitation Facilities Minister Abdel Qawy Khalifa said Sunday. Khalifa discussed the project at a press conference held by James Moran, head of the European Union delegation to Egypt, to mark the EU’s payment for the first installments of two different programs — one to support energy policies and one to support water policies. [Egypt Independent, 10/22/2012]

Egypt wants to use all local wheat for subsidized bread
Egypt, the world’s biggest wheat importer, will be able to cease importing wheat for the production of state-subsidized bread if it builds enough silos to store locally-produced grain, Agriculture Minister Salah Abdel Momen said on Sunday. Of the 18.8 million tons of wheat consumed in Egypt each year, around half is grown locally. Abdel Momen said the subsidized bread upon which millions of Egyptians depend accounts for 9.6 million tons of wheat consumption. Last season, Egypt’s harvest was 9.5 million tons, he said. [Egypt Independent, 10/21/2012]

Rights group: New draft laws restrict freedoms as under Mubarak
The government still drafts laws to restrict the rights and freedoms of citizens like under ousted President Hosni Mubarak, the Cairo Institute for Human Rights Studies said in a statement. The statement said the Interior Ministry submitted five draft laws that stipulate severe punishments, even to the extent of penalizing possible criminal intent. [Egypt Independent, 10/21/2012]

French journalist reports facing sexual assault in Egypt’s Tahrir Square
A French female television reporter was sexually assaulted during a protest in Cairo’s Tahrir Square, she told AFP on Saturday, the latest of such attacks on women covering unrest in Egypt. Sonia Dridi, a correspondent for France 24, said a mob of mostly young men surrounded her on Friday while she was on the air and then began to grope her. The attack lasted several minutes before a male colleague managed to pull her out. [AFP/Ahram Online, 10/21/2012]

Minister: Final report on Ethiopian dam in February
The final report on the Grand Ethiopian Renaissance Dam will be submitted to the governments of Egypt, Sudan and Ethiopia in February, Water Resources and Irrigation Minister Mohamed Bahaa Eddin has said. The report includes plans for action in case the dam is found to negatively affect any of the three countries. [Egypt Independent, 10/22/2012]

Egypt studies joint stock trading with Turkey
The Egyptian Exchange is studying an alliance with the Istanbul Stock Exchange that would allow investors in the two countries to trade on each other’s markets. “A delegation from the Istanbul Stock Exchange will visit Egypt in December … to discuss the means of joint trading between the Egyptian bourse and the Istanbul bourse,” Mohamed Omran, the stock exchange chairman, told Reuters Sunday. [DNE, Egypt Independent, 10/22/2012]