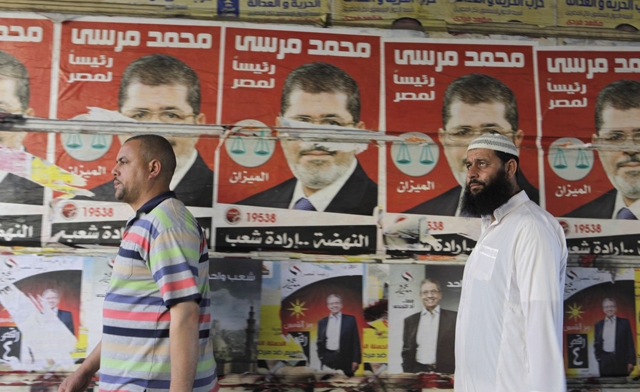 The SCAF is expected to issue a supplementary constitutional declaration clarifying the powers of the incoming president days before he is elected, according to Al-Shorouk newspaper.

A high number of Egyptians abroad have turned out to vote so far in the presidential election runoff, the Foreign Ministry said Monday. Polls opened for expatriates Sunday in the runoff between Muslim Brotherhood candidate Mohamed Morsy and former Prime Minister Ahmed Shafiq. Nearly 20,000 people went to the polls Sunday at Egyptian embassies and consulates abroad, Foreign Ministry spokesperson Amr Roshdy said in a statement published on the ministry’s website. Kuwait had the highest voter turnout with 5,630 voters, followed by Riyadh with 3,000, Jeddah with 2,400, Doha with 1,975 and Abu Dhabi with 1,196. Paris came out on top of other European countries, with 580 voters.

The Supreme Council of the Armed Forces (SCAF) will hold a meeting Monday morning with its Advisory Council to discuss mass protests that erupted across Egypt following the controversial verdict in the trial of former president Hosni Mubarak and a number of senior figures in the former regime. They will also discuss some of the protesters’ demands, including the formation of a presidential council made up of revolutionary figures to rule the country during the coming period and the postponement of the presidential election runoff. Al-Shorouk, however, reported on the Muslim Brotherhood’s rejection of the idea of a presidential council, citing various concerns.

A judicial committee on Sunday approved the establishment of the liberal Freedom Egypt Party, formed by independent MP Amr Hamzawy, state-run news agency MENA reported. The Freedom Egypt Party is the newest liberal party, founded by a group of young, liberal Egyptians along with Hamzawy, the elected MP from Heliopolis. The party principles focus on the right to a dignified life and equality for Egyptians regardless of color, gender or religious beliefs. It also calls for freedom and democracy. The Political Parties Affairs Committee has approved about 40 political parties since the January 25th uprising.

According to Egyptian state television, Egypt’s public prosecutor on Sunday lodged an appeal against verdicts handed down by a Cairo criminal court to ousted president Hosni Mubarak, his two sons, former interior minister Habib El-Adly and six of the latter’s assistants. Although Mubarak and El-Adly were both slapped with life sentences for participating in the crime of killing of protesters during last year’s January 25 Revolution, six police chiefs were acquitted of similar charges.

Holes in prosecution behind acquittals in Mubarak case

Head judge Ahmad Refaat said Saturday the criminal court’s ruling of a life sentence (25 years) for former President Hosni Mubarak and his Minister of Interior Habib al-Adly and the acquittal of the Mubarak sons and senior ministry officials is largely based on flaws and contradictions in the prosecution’s case. Refaat laid out nine reasons for the acquittal of the other nine defendants in the case. Some of the reasons cited by Refaat included the lack of concrete evidence, the prosecution’s inability to identify the individual perpetrators of the killings and the contradictory testimony of prosecution witnesses.

Thousands gathered in Tahrir Square Sunday to protest the acquittals given to nine defendants in the major trial that sent former President Hosni Mubarak to jail for life. Chanting against the verdict, demonstrators demanded the formation of a civilian presidential council including defeated candidates Abdel Moneim Abouel Fotouh and Hamdeen Sabbahi united under Muslim Brotherhood candidate Mohamed Morsy. They also called for the retrial of all defendants in the case and that the Political Isolation Law be applied to Ahmed Shafiq, who will compete against Morsy in the election runoff on 16 and 17 June.

Egypt’s finance minister has submitted the government’s draft 2012/13 budget to Parliament, confirming figures and spending plans unveiled by his ministry last month. Speaking before the People’s Assembly on Monday, Momtaz El-Saeed confirmed that total state expenditure for 2012/13 will reach LE635.4 billion, up from LE594 billion in the current financial year. State spending will see a 8.8 per cent raise and give additional funding to food subsidies, pensions and housing. But subsidies for fuel and gas will be allotted LE70 billion of state spending in 2012/13, a significant drop on LE95.5 billion this year.

Egypt’s finance minister said today his ministry had allocated an additional $100 million for fuel purchases in a bid to ease ongoing shortages in the market. Momtaz el-Saieed said in a statement that the ministry had also taken “urgent measures” to ensure that other commodities were available in the market. The additional funds raised to $4.3 billion dollars the amount given to the Egyptian General Petroleum Corp. until now, the minister said, without saying over what period the funding had been provided.

An Egyptian-American activist who was among the 43 NGO workers charged with receiving illegal foreign funding was detained upon arrival at Cairo International Airport. Sherif Mansour, 32, a former senior program officer for Freedom House’s Middle East and North Africa programs, was on the airport’s watch list for his implication in the case, state-run news agency MENA reported. Mansour said on his Twitter account Sunday that he would spend the night at the airport and be transferred to the public prosecutor in the morning.