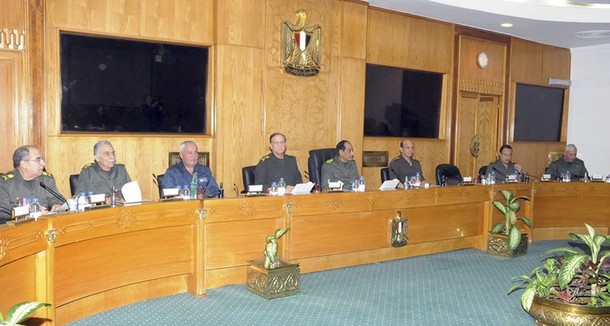 SCAF is currently holding an urgent meeting to discuss the country’s latest developments according to Ahram and Al Masry Al Youm. The meeting came as a surprise to many activists who said that they thought that SCAF’s role in Egyptian politics was over when they handed in authority to President-Elect Mohamed Morsy.

[Egypt Independent (LiveBlog), Ahram Online, 7/26/2012] SCAF is currently holding an urgent meeting to discuss the country’s latest developments according to Ahram and Al Masry Al Youm. The meeting came as a surprise to many activists who said that they thought that SCAF’s role in Egyptian politics was over when they handed in authority to President-Elect Mohamed Morsy. On Tuesday, new Prime Minister Hisham Qandil said there were ongoing discussions between Tantawi and Morsi on who would be appointed to the post of defense minister in the new cabinet. According to the constitutional addendum issued by the SCAF in late June, the military will appoint the defense minister.

[Al Shorouk (Arabic) Ahram Online, 7/26/2012] Abdallah Shehata, an economist and a FJP member, said that the ministers of commerce and industry, finance and planning "will not necessarily be from the FJP but will be chosen by the party." He also added that the Ministry of Investment is likely to be revived in the upcoming government. This implies that Egypt’s veteran Minister of Planning and International Cooperation Fayza Abul-Naga, who has held the same post for the past eleven years and is widely seen to be the military council’s strong woman, will not be reappointed. Along with the ministers of defense and energy, Abul-Naga is among the only three in the incumbent cabinet to keep their positions after the ouster of Hosni Mubarak.

According to official news agency MENA, Egypt’s newly-appointed Prime Minister Hisham Kandil met eleven nominees on Wednesday for various ministerial portfolios. Yasser Ali, spokesman for Egyptian President Mohamed Morsi, had earlier said that members of Egypt’s new cabinet would be unveiled by the middle of next week. PM Kandil, however, assured the people at a press conference Thursday that the cabinet would be announced Saturday at the latest. (The nominees with whom Kandil met are listed in the article.)

[Egypt Independent, 7/26/2012] Salafi and Islamist groups will run for the next parliamentary elections on separate slates, the Salafi-led Nour Party, Asala Party, and Hazem Salah Abu Ismail’s campaign have announced. The Asala, Nour and the Construction and Development parties contested the previous parliamentary elections in one coalition. The Salafi Front announced its members would run in the elections for the first time since its founding and contest a majority of seats. The Salafi Front added it was considering joining Abu Ismail’s new party or establishing its own party.

[Ahram Online, 7/25/2012] Amid ongoing negotiations over Egypt’s new constitution, Maspero Youth Union– a Coptic-Christian revolutionary movement – announced its rejection of recent proposals to make Islamic Law "the sole source" of Egyptian legislation. "We will not approve a constitution that abolishes the civil state and encourages discrimination," the group declared on its official Facebook page on Wednesday. Protesters will call on Coptic Bishop Bakhomios, who is currently acting as interim pope, to withdraw all church representatives from Egypt’s Constituent Assembly – tasked with drafting a new national charter – "after their failure to preserve constitutional articles and allowing Egypt to be turned into a religious state”.

[Reuters, 7/25/2012] Egypt’s cash-strapped government has been borrowing from the central bank on a large scale over the last 12 months, an unusual measure that indicates it may be running out of options to finance its persistently high budget deficit. The borrowing has helped the army-backed interim cabinet to keep the economy running during the delicate transition to democracy, but shows the sheer scale of the task the new government will face as it tries to resolve Egypt’s daunting financial problems.

[Ahram Online, 7/25/2012] Mergers and acquisitions in the Arab world increased from April to June of this year compared with the previous quarter. Forty-three transactions were announced during the period, worth a total value of some $16.73 billion. Ten of the transactions in question still require approval from the relevant bodies, according to a report released by the Capital Link Globe Institute, which specializes in news on mergers and acquisitions worldwide. Despite Egypt’s current state of political uncertainty and economic malaise, the country boasted the largest number of major corporate transactions in the region for the period, including eight mergers and acquisitions. The most significant of these was France Telecom’s takeover of Egyptian mobile-phone provider Mobinil in a $2.96 billion tender offer.

Morsy to meet Haniyeh on Thursday

[EGYNews (Arabic), Egypt Independent, 7/25/2012] President Mohamed Morsy will meet Ismail Haniyeh, prime minister of the Gaza Strip, on Thursday, said presidential spokesperson Yasser Ali on Wednesday. Morsy has spoken with key political figures from Palestine over the past week, including Palestinian President Mahmoud Abbas and Khaled Mashaal, the head of the Hamas political bureau. Discussions between Morsy and the Palestinian officials centered on how to end the siege of the Palestinians in Gaza, such as by relaxing visa regulations for Palestinians to get into Egypt.