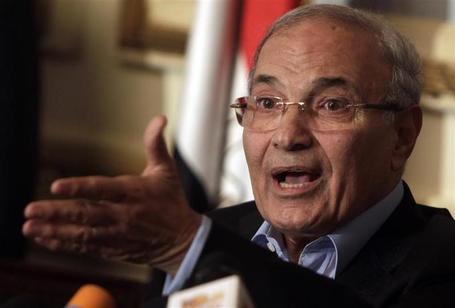 Ahmed Shafiq on Monday evening speaking in a televised interview on the private channel CBC, sustained his attacks on the Muslim Brotherhood accusing them of sectarianism and divisiviness. Shafiq also accused the Brotherhood of participating in the killing of protesters in Tahrir Square during the 18-day uprising that led to the toppling of Mubarak. He warned of the dangers of their coming to power alluding to the way they would forcefully impose their views on society.

Shafiq accuses Brotherhood of killing protesters during Battle of Camel

Ahmed Shafiq on Monday evening speaking in a televised interview on the private channel CBC, sustained his attacks on the Muslim Brotherhood accusing them of sectarianism and divisiviness. Shafiq also accused the Brotherhood of participating in the killing of protesters in Tahrir Square during the 18-day uprising that led to the toppling of Mubarak. He warned of the dangers of their coming to power alluding to the way they would forcefully impose their views on society. Shafiq also snubbed the protests in Tahrir and stated that those who want a reverse in the political process and the repeat of the elections are "dreamers", as he affirmed: "The ballot box is sacred".  On a different note, he also stated that once in power, he will be able to enforce order and security ending endemic traffic jams in Egypt in a matter of 24 hours.

The Advisory Council called for a supplement to the Constitutional Declaration that would amend Article 60, which deals with the formation of the Constituent Assembly intended to draft Egypt’s first post-Mubarak constitution. During their meeting with the Supreme Council of the Armed Forces on Monday, the Advisory Council demanded that the amendment stipulate that Parliament would not choose the members of the assembly and that parliamentarians could not sit on the assembly.

The Supreme Council of the Armed Forces held a meeting on Tuesday with party chiefs and several independent members of Parliament to review recent political developments. Eighteen party representatives attended the meeting, presided over by SCAF head Hussein Tantawi, but the Muslim Brotherhood’s Freedom and Justice Party boycotted it. The party said it would absolutely reject any amendments to the Constitutional Declaration, as they would disrespect the will of the people who voted in the March 2011 referendum.

A revolutionary figure has said that the Muslim Brotherhood’s presidential finalist, Mohamed Mursi, voiced objections to the idea of forming an interim presidential council that would assume power and see the ongoing presidential elections cancelled. Mursi, however, supported pushing for the application of the disfranchisement law that would prevent his rival Ahmed Shafiq from competing in the final stage of the presidential vote. Mursi said a presidential council would not be constitutional, while the rest of the attendees endorsed the idea during the long meeting that was still ongoing at the time of publication.

In a trio show of force on Monday evening, former presidential candidates Hamdeen Sabbahi, Abdel-Moneim Abul-Fotouh and Khaled Ali together spoke to the thousands of protesters in Tahrir Square upholding a sit-in since Saturday. Sabbahi stated that the revolutionary forces are adamant about forming a presidential council in lieu of continuing the current elections in light of blatant violations taking place. The most evident violation is the fact that the political Disenfranchisement Law was disregarded, said the Nassrist leader. The three former candidates said they hope an interim council pre-empt a return of the Mubarak regime and also achieve a degree of national unity. Abul-Fotouh echoed the demonstrators’ demand for the establishment of "revolutionary courts." Khaled Ali announced that the suggestions for the members of the presidential council are expected to be revealed on Friday.

Defense witnesses can give testimony in next NGO trial session, court rules

The trial of 43 NGO workers was adjourned again on Tuesday until 4 July. Only 17 defendants appeared in the dock today, including a German national and two Americans. One of the Americans, Sherif Mansour, flew into Egypt on Sunday night and was arrested and detained in a Cairo police station until the trial on Tuesday. Defense lawyers lodged several requests during Tuesday’s court session, including that defense witnesses be allowed to give testimony to the court and that the documents seized from Freedom House in a previous raid be translated into Arabic. Defense lawyer Negad al-Borai also demanded that an official from the Social Solidarity Ministry be summoned to give testimony in court, and he presented documents to substantiate his claim that the ministry had previously approved funding to Freedom House. Commenting on the Tuesday session, Borai said he was happy with the course of the proceedings, in particular the court’s approval of the defense’s major requests.

Since the fall of the Mubarak regime and the rise of political Islamism following the electoral victories of the Muslim Brotherhood, a new potential menace has resurfaced in the security vacuum – the rise of extremist jihadist groups. These groups embrace an extreme Salafist interpretation of Islam, which accepts violence as a legitimate means of realizing their demands. Some experts believe scare tactics are being used to deter the possibility of an Islamist president. Observers believe there are two principal jihadist movements in Egypt, both based in Sinai but with countrywide influence: Takfir Wal Hijra and Salafist jihadism, whose adherents are known as Salafist jihadists. Both factions adhere to an extreme Salafist interpretation of Islam, following Al-Qaeda’s philosophy and goal of re-establishing an Islamic Caliphate. But experts believe that Al-Qaeda itself does not exist in Egypt.

Egypt stocks saw another bout of mild losses on Monday as political turmoil and the prospect of ongoing protests took a further toll on market volume. The benchmark EGX30 slipped 0.35 per cent to 4,610 points, taking it closer to a three-month low. Trade, too, continued to be squeezed, totalling a thin LE155 million ($26m). "The market continues to be weak on all fronts, with most investors on the sidelines," said Menna Raslan at Cairo-based Naeem Brokerage. Last week’s results to Egypt’s first freely-contested presidential elections, which saw divisive figures of the Muslim Brotherhood and the regime of ex-president Hosni Mubarak take the top two places, have raised anxieties among investors. Some heavyweight shares made healthy gains, cushioning the main index from more significant losses.