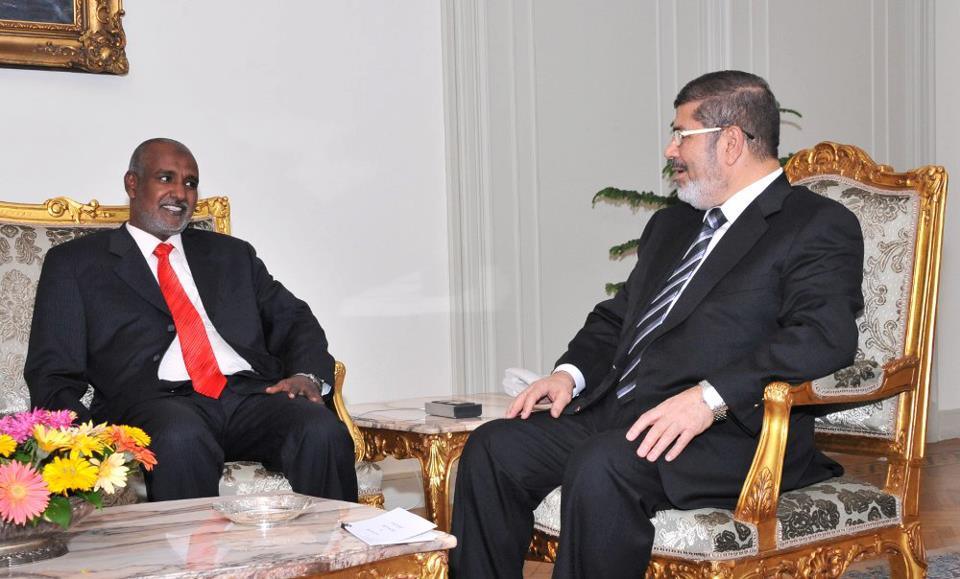 Sudan’s ambassador to Egypt, Kamal Hassan, stated on Tuesday that Egypt and Sudan may call for intervention by the Arab League in response to the diversion of the Blue Nile on Tuesday at the construction site of a new Ethiopian dam project. If the dam is found to threaten Egypt and Sudan’s share of the Nile water, then an emergency session in the Arab League will be called, Hassan said.

Morsi submits final NGO bill to Shura Council, reassures civil society
President Mohamed Morsi, speaking before representatives of Egyptians NGOs on Wednesday, announced that he has officially submitted a modified version of a contentious NGO bill to the Shura Council for review. "The NGO law is the first to be submitted by the presidency after the [new] constitution, with the aim of empowering civil society organizations and ensuring that the state will not restrict their activity, as long as they are working for the good of the country," Morsi announced during a convention on civil society activities in Cairo, attended by representatives from around 250 local NGOs. The presidency also issued a series of tweets on its official account saying that the NGO law, proposed by Morsi’s newly formed legal advisory committee is “a fulfillment of a key demand of the January 25 Revolution: empowerment of civil society.” It also shared quotes from the president speaking about enabling NGOs to “become partners in public policy making and improving government decisions.” Morsi has also ordered the formation of a permanent presidential committee tasked with facilitating the work of civil society organizations. [Ahram Online, ONA (Arabic), AMAY (Arabic), Video, 5/29/2013]

Salafist politician wants referendum on police, military right to vote
Yosri Hammad, chairman of the Salafist Watan Party, has said that a court decision granting members of the army and the police the right to vote should be put to referendum by Egyptian President Mohamed Morsi. Following the decision of the High Constitutional Court (HCC) on Sunday, Parliamentary Affairs Minister Hatem Bagato said that the Shura Council would not challenge the court’s decision. “The involving of the military institute in politics after their withdrawal is a dangerous issue,” said Hammad, adding that the court’s decision was a “surprise” given that officers have been barred from voting since 1976. [Ahram Online, 5/28/2013]

Cabinet refers syndicates law to Shura Council
The cabinet approved in its meeting on Wednesday, chaired by Prime Minister Dr. Hisham Qandil, the referral of the law regulating professional syndicates to the Shura Council, in accordance with the conclusions reached in social dialogue sessions to the Supreme Legislative Committee tasked with its drafting. The cabinet also reviewed a draft law amending some provisions of Law No. 94 of 2003 concerning the National Council for Human Rights, where it agreed to adjust its phrasing before sending it to the Shura Council. [Shorouk (Arabic), ONA (Arabic), 5/29/2013]

Egyptian court rejects lawsuit to annul constitutional referendum
Egypt’s Administrative Court rejected on Tuesday a lawsuit demanding the annulment of December’s constitutional referendum. The lawsuit, filed by ultra-conservative Islamist preacher Youssef al-Badry in January, claimed that the referendum’s second round of voting was unconstitutional because all polling should have taken place on the same day, according to the March 2011 constitutional declaration. The Administrative Court also rejected more than 40 lawsuits filed against the former speaker of the People’s Assembly, the speaker of Shura Council and the minister of parliamentary affairs. The lawsuits sought to challenge the legality of the formation of the Constituent Assembly formed after the constitutional declaration of 30 March 2011, and the reformed assembly after the first was dissolved. [Ahram Online, DNE, 5/28/2013]

Egypt judges on strike over judicial authority law
Members of the Judges Club – which represents over 90 percent of Egyptian judges – have gone on strike in protest at proposed amendments to the judicial authority law, the club’s deputy chairman, Abdullah Fathi, said on Tuesday. The announcement followed a meeting on Tuesday between the Supreme Judicial Council (SJC) and the Judges Club. Judges’ Club Chairman Ahmed al-Zend also said that all judges and not just their leaders would be consulted on any proposed amendment to the Judiciary Law if the Shura Council attempts to amend it. He added that the Judges Club and SJC were in “complete agreement” on how to approach the issue of the Shura Council amending the Judiciary Law and that if the upper house of parliament requires the opinion of judges on the amendments “they will receive an answer that pleases all judges”. [Ahram Online, DNE, 5/29/2013]

IMF ready to sign Egypt loan agreement before parliament elections
The International Monetary Fund (IMF) is ready to sign a $4.8 billion loan agreement with Egypt before or after the coming parliamentary elections, Reuters News Agency reported an IMF official as saying. It all depends on the Egyptian government’s willingness to show political consensus and take austerity measures. Whether the agreement is reached before or after the elections depends on Egypt’s readiness to take austerity measures, the IMF Deputy Managing Director Nemat Shafik said. [Aswat Masriya, 5/29/2013]

Finance Ministry official: Bylaws for new sukuk law to be released soon
Ahmed al-Naggar, advisor to Egypt’s Finance Minister for Islamic bonds, said the ministry was close to completing drafting the legal bylaws for the country’s sukuk law, which would enable it to sell Sharia-compliant debt both internationally and locally.  He added that a number of public and private agencies will take part in the drafting of the law’s new regulations, including the Central Bank, which will help determine the role of banks as promoters and subscribers for such bonds, both in the public and private sector. Naggar stated that the new draft law will be posted on the ministry’s website, in order to promote dialogue on the issue. [DNE, 5/28/2013]

Anti-Morsi ‘Rebel’ petition collects over 7 million signatures
Organizers of the anti-Morsi ‘Rebel’ campaign announced on Wednesday that the movement has succeeded in gathering 7,540,535 signatures in support of its goals. The petition will be submitted to the prosecutor-general. Organizers of the campaign called on Egyptians and Egyptian political groups to join their call for a million-man march outside the presidential palace in Cairo on 30 June while holding red cards as a sign of protest, calling  for an end to the ‘Muslim Brotherhood’s rule’ and to demand immediate presidential elections. Popular Current member and journalist Abdel-Halim Qandil has said the Rebel campaign signals the imminent downfall of President Mohamed Morsi. Meanwhile, Muslim Brotherhood leader Mohamed al-Beshlawy condemned the campaign, calling its supporters “retarded” and dismissing the 7 million signatures that have been collected. [Ahram Online, Aswat Masriya, Youm7 (Arabic), 5/29/2013]

New amendments to Egypt NGO bill fail to satisfy rights groups
Despite recent amendments by Egypt’s presidency, rights activists say that proposed legislation regulating the activities of NGOs operating in the country remains dangerously repressive. A coalition of the world’s leading human rights NGOs – including Amnesty International, Human Rights Watch, the Cairo Institute for Human Rights Studies and the International Service for Human Rights – is urging the UN Human Rights Council to take action to address worsening human rights violations and civil society restrictions in Egypt. In a joint letter to all state delegates to the Human Rights Council, the coalition says, ‘Egypt is at a crucial crossroads in its history: the future of independent civil society is currently under threat.’ At a Tuesday press conference convened by the presidency, Pakinam al-Sharkawy, presidential advisor for political affairs, defended the revised draft. [Ahram Online, Amnesty International, ISHR, Shorouk (Arabic), 5/29/2013]

The show will not go on: Cairo Opera House on strike
The Cairo Opera House witnessed unprecedented protests on Tuesday, following the sacking of opera house head Ines Abdel-Dayem by the new culture minister. Instead of the expected evening performance of opera Aida, the curtain was raised on a stage full of hundreds of opera house musicians and staff holding protest signs. Culture Minister Alaa Abdel-Aziz, who was appointed earlier this month, dismissed Abdel-Dayem on Tuesday morning, to outrage from the opera house community. Abdel-Dayem is the third in a series of sackings of senior officials by the new minister of culture since he took office three weeks ago, after Ahmed Mujahid, head of the Egyptian General Book Authority, and Salah al-Meligy, head of the Fine Arts Sector, were let go. [Ahram Online, Aswat Masriya, DNE, EGYNews (Arabic), 5/29/2013]

Sudan, Egypt may call on Arab League over Nile dam
Sudan’s ambassador to Egypt, Kamal Hassan, stated on Tuesday that Egypt and Sudan may call for intervention by the Arab League in response to the diversion of the Blue Nile on Tuesday at the construction site of a new Ethiopian dam project. If the dam is found to threaten Egypt and Sudan’s share of the Nile water, then an emergency session in the Arab League will be called, Hassan said. Reactions on the part of Egyptian government officials, diplomats and experts varied but Mohamed Idris, Egyptian ambassador in Addis Ababa, reiterated the positive relations Egypt has developed with Ethiopia. He warned, however, that Egypt would not support the project if its interests were harmed. A government source said Cairo was notified in advance about the diversion of the Blue Nile before the move was officially announced by Ethiopia in accordance with agreements regulating the distribution of Nile water. The Nour Party announced on Wednesday that it will form its own committee to look into the current issue of Ethiopia’s Nile dam project. The Arab, Foreign Affairs, and National Security Committees of the Shura Council, chaired by Mr. Fahmi Reza Chairman of the Committee, will hold a meeting on Sunday to discuss the situation. Sudan’s Minister of Water Resources and Electricity arrived in Cairo on Wednesday for a one-day visit to discuss Ethiopia’s plans. [Ahram Online, DNE, Shorouk (Arabic), DPA/Egypt Independent, Aswat Masriya, Shorouk (Arabic), 5/29/2013]

Shura Council condemns Hezbollah’s role in Syria
The Shura Council’s Foreign Affairs and National Security Committee condemned what it described as Hezbollah’s blatant and direct intervention by Hezbollah in Syria. Chairman of the Committee Reda Fahmy said that Hezbollah’s actions threatened regional peace and security, and called on them to withdraw from Syria. Meanwhile Secretary of State John Kerry spoke with Egyptian Foreign Minister Kamel Amr on Wednesday regarding the upcoming Geneva talks on Syria. [ONA (Arabic), Ahram (Arabic), 5/29/2013]

US Consul General to Alexandria: Egypt has agreed to international monitoring of elections
US Consul General to Alexandria Candace Putnam said on Tuesday that the Egyptian government has agreed to international monitoring of the upcoming parliamentary elections, but added that the number of organizations that will participate has yet to be revealed. Eric Bjornlund of Democracy International added that the holding of parliamentary elections is an issue for the political actors to decide, but added that participation in elections is important, and represents a step on the path to reform. [Shorouk (Arabic), 5/29/2013]