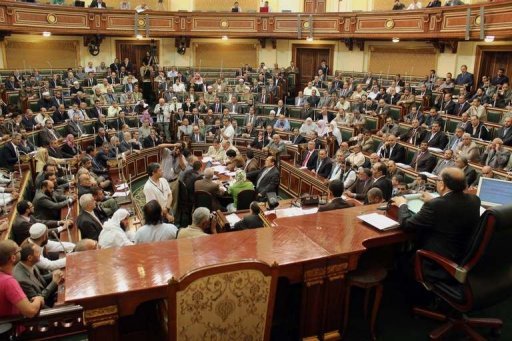 The Supreme Administrative Court (SAC) ruled Saturday to uphold the verdict of the High Constitutional Court (HCC) deeming the People’s Assembly, formed after national polls in November 2011 unconstitutional. The assembly was dissolved on the basis of that verdict.

Morsi vows to end corruption during first Egyptian TV interview since election
President Mohamed Morsi used his first interview with Egypt’s national television broadcaster on Saturday evening to highlight corruption and the poor use of resources as the biggest challenges facing the country. President Morsi said he was optimistic that issues involving “security, employment, tourism, industry, and agriculture” could be solved, but they would take time. Morsi said corruption and the poor use of resources were the main problems facing the country. Channelling resources in the right direction and encouraging investment would lead Egypt out of its transition period, he asserted. [Ahram Online, 9/22/2012]

New labor measures respond to rising tide of strikes
The government and officials from the state-controlled workers’ union federation have proposed several controversial new labor measures, apparently concerned that strikes are a threat to the fragile economy. The proposals include a new draft of the long-anticipated Trade Union Liberties Law; holding official trade union elections, which are tentatively scheduled for October and November; and a yearlong moratorium on strikes, in exchange for certain concessions, proposed by the state-controlled Egyptian Trade Union Federation. [Egypt Independent, 9/24/2012]

Supreme Administrative Court upholds HCC verdict leading to dissolution of People’s Assembly
The Supreme Administrative Court (SAC) ruled Saturday to uphold the verdict of the High Constitutional Court (HCC) deeming the People’s Assembly, formed after national polls in November 2011 unconstitutional. The assembly was dissolved on the basis of that verdict. Although the SAC adjourned a similar case Saturday appealing the dissolution of the People Assembly, parliament’s lower house, to 15 October, only hours later it ruled in a different case in favour of the HCC verdict. The FJP issued a statement expressing surprise at the ruling, vowing a legal response to challenge it. [Ahram Online, Akhbarak (Arabic), 9/22/2012]

Egypt draft constitution article raises fears for women’s rights
Following publication of Article 36 of the ‘Rights and Duties’ section of Egypt’s draft constitution, a number of political parties, coalitions and public figures have issued a joint statement expressing their "deep concern" for the draft article’s wording, which, they say, could compromise women’s historical rights. The wording as it currently stands reads: "The state is committed to taking all constitutional and executive measures to ensure equality of women with men in all walks of political, cultural, economic and social life, without contradicting the precepts of Islamic Law." Critics fear that the wording of the draft article is a convoluted detour around equal rights between men and women. [Ahram Online, 9/23/2012]

USAID loan promises small businesses help, but without a guarantee
In a visit to Egypt in late August, US Under Secretary of State Robert Hormats announced a US$34 million loan guarantee extended to HSBC Bank by USAID in support of small- and medium-sized enterprises, or SMEs. The initiative is part of the agency’s Egypt Competitiveness Project, first publicized in November 2011. Though the initiative offers low risk and potentially high reward for the bank, according to a USAID official, there are no strict guidelines to ensure the credit will be given out to deserving small-business owners. [Egypt Independent, 9/24/2012]

Govt says has no intention to abolish subsidies
Petroleum Minister Osama Kamal said the government has no intention of canceling  subsidies of petroleum products from which the poor benefit. In an interview with state TV that was broadcast Sunday, Kamal said the government’s goal is “not to make money but to serve the citizen,” and added that the government is not planning to cancel subsidies. The minister added that the country’s petroleum and gas reserves are sufficient to cater to the needs of the country for the coming 17 and 20 years, respectively. The statement runs contrary to reports of a coupon system designed to cut massive energy subsidies which eat up around a quarter of government spending. [Egypt Independent, Reuters , 9/24/2012]

Egypt condemns 14 to death for 2011 Sinai attack, Group claims latest attack
An Egyptian court sentenced to death on Tuesday 14 people for a deadly attack on a police station in North Sinai last year, a court official said. The condemned men, described by the court as Islamist militants, were convicted for attacking a police station in North Sinai’s main town of Arish in July 2011, killing an army officer, five policemen and a civilian, the court said. They were all accused of being members of Al-Tawhid Wal Jihad, one of the banned groups being targeted in a security crackdown on militants in the desert peninsula. Ansar Jerusalem, in a statement posted on militant forums late Saturday, claimed responsibility for a shootout along the Israeli-Egyptian border in which three militants and an Israeli soldier were killed linking the attack to an online video denigrating the Prophet Muhammad that has sparked protests across the Muslim world. [Egypt Independent, AP, 9/24/2012]

Cairo transport workers halt strike, for now
Cairo’s public transportation workers suspended a weeklong partial strike on Sunday after being promised their demands for an administrative shake-up would be considered. A handful of bus depots in the capital suspended operations on Saturday 15 September, with workers demanding the separation of the Cairo Transportation Authority (CTA) from governorate administration, and its attachment to the Ministry of Transport — a move, workers say, will boost their salaries and bonuses. "We know that promises are largely meaningless, and we will probably strike again," said Ali Fatouh, a leader of the workers independent syndicate at the CTA. [Ahram Online, 9/22/2012]

Obama thanks Egypt’s president over embassy protection
U.S. President Barack Obama has thanked the Egyptian president for securing the U.S. Embassy during protests against a film made in the United States that mocked Prophet Mohammad and sparked worldwide demonstrations and violence. In a letter, Obama repeated Washington’s condemnation of the film and said he looked forward to working with President Mohamed Morsi to build on the "strategic partnership", Mursi’s official Facebook page said on Sunday. Speaking before travelling to New York for the U.N. General Assembly, Morsi said Washington needed to change its approach to the Arab world, show greater respect for its values and help build a Palestinian state to reduce pent up anger in the region, the newspaper said. [Reuters, 9/23/2012]

Morsi to meet with the heads of France and the United Kingdom, Calls to criminalize religious defamation
Morsi will issue his first speech to the UN General Assembly on Wednesday that will clarify Egypt’s position on regional and international issues under the title, “Peaceful Conflict Resolution.” Foreign Minister Mohammed Kamel lAmr said that President Morsi plans to meet with the leaders of France and Britain in addition to Ban Ki Moon and representatives of Egyptians residing in Egypt. Emad Abdel Ghaffour, leader of the Salafi Nour Party called on President Morsi to demand the UN criminalize contempt of religion after the release of an anti-Islamic film and cartoons which demonstrate growing racism. [Reuters, Shorouk (Arabic), 9/22/2012]

Egypt’s Morsi says Iran is vital to ending Syria’s crisis
Egypt’s Islamist President said on Saturday that having a strong relationship with Iran is important for Egypt at this time to be able to work out a way to end the bloodshed in Syria. Speaking in a televised interview, his first to state TV since his election last June, President Mohamed Morsi described Iran as "a main player in the region that could have an active and supportive role in solving the Syrian problem." "I don’t see the presence of Iran in this quartet as a problem, but is a part of solving the (Syrian) problem," Morsi said, explaining that Iran’s close proximity to Syria and its strong ties with it makes it "vital" in resolving the Syrian crisis. [Reuters, 9/23/2012]