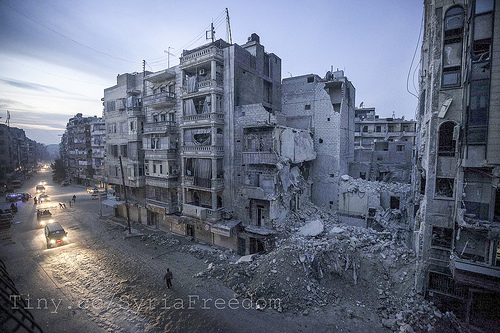 The opposition Syrian National Coalition on Wednesday denied Russian allegations that rebel fighters fired a projectile laden with the nerve agent sarin at a suburb of Aleppo in March, saying United Nations inspectors should be allowed to investigate the attack.

NSF submits proposal to amend the constitutional declaration
The National Salvation Front (NSF) said it has submitted a proposal for amending the constitutional declaration issued by interim President Adly Mansour. In a statement issued on Thursday afternoon, the front said that no single party or political power alone should have the "right to oppose proposals or decisions in a way that hampers the progress of the political process…" The statement may be referring to the Salafi Nour Party, which rejected the nomination of Mohamed ElBaradei to the post of prime minister because of his affiliation to the NSF, and opposed the selection of Ziad Bahaa Eddin because he belongs to the Egyptian Social Democratic Party. [Egypt Independent, Shorouk News (Arabic), 7/11/2013]

United States to deliver fighter jets to Egypt
The United States is moving ahead with plans to deliver four F-16 fighter jets to Egypt despite the ongoing debate about the military overthrow of President Mohamed Morsi and whether it legally constitutes a coup that could shut off aid to the country. The jets, which will likely be delivered in August and are built by Lockheed Martin, are part of the annual aid package, a US defense official said. [AP, Reuters, 7/10/2013]

Gunmen continue to target military checkpoints and personnel
A twenty-two year-old central security conscript was killed early Thursday morning after alleged smugglers shot him near the eastern border when he attempted to stop them south of the Rafah land crossing and Karm Abu Salem crossing. A similar attack happened in the district of Qasr al-Bassel in Fayoum when an armed vehicle opened fire at a military establishment and drove off. A car coming from the Rafah border area opened heavy fire on a security checkpoint near Sheikh Zuweid Wednesday. [Aswat Masriya, Mada Masr, DNE, Ahram (Arabic), Shorouk (Arabic), 7/11/2013]

Libyan government takes back ministry from armed group
The Libyan government has taken back control of its interior ministry from an armed group that had besieged the building for a week and ordered staff to leave, an official said on Wednesday. The armed men were demanding that authorities break up an armed force known as the Supreme Security Committee, which says it is backed by the interior ministry. The government has said it is drawing up plans to disband militias, but has not given details of how the authorities will tackle the bands of fighters. [Reuters, 7/10/13]

Government does about-turn on National Guard
The government has repealed a resolution, announced a month ago, to set up a National Guard. It was intended to support the Libyan army in protecting the country from foreign aggressors and to play a secondary role in helping the police maintain internal stability and security. No reasons were given for the appeal, but Prime Minister Zidan’s official website said that a new law would be created by the General National Congress. [Libya Herald, 7/11/13]

Isnad brigade to be confined to their barracks, says Zidan
Prime Minister Ali Zidan said at a press conference that the Isnad brigade will continue to be paid until the end of the year but will be confined to their bases. There had been confusion when two different official rulings seemed to contradict one another – one stipulating that all military groups must disband and leave the capital and another saying that the Isnad brigade had an extension until December 31, 2013. Zidan clarified that the extension applied solely to their pay but not to their activities. [Libya Herald, 7/10/13]

Government needs more finances quickly, says Zidan
Prime Minister Ali Zidan said that the government needs more money quickly in order to be able meet its commitments, including towns destroyed during the revolution, the internally and externally displaced, the security of Libya’s southern borders, the councils, and more. With regard to rearming the military, the government needs to purchase new advanced weapons from abroad because the old weapons were either destroyed or pilfered by Libyans. The prime minister also complained about a new condition inserted in the 2013 budget, now making it the exclusive right of the General National Congress to move money from one section of the budget to another. [Libya Herald, 7/10/13]

Syria’s Assad says ousted Baathists made mistakes
Ruling party leaders removed in a reshuffle this week had made mistakes while in office, Syria’s President Bashar al-Assad told the Baath party’s mouthpiece in an interview published Thursday. The interview was published two days after the Baath party announced the names of sixteen new leaders, which included none of the party’s former chiefs with the exception of Assad, who will remain secretary general. "When a leader does not solve a series of errors, this leader must be held accountable," Assad told al-Baath newspaper, without elaborating. [NOW/AFP, 7/11/2013]

Syria opposition denies Russian chemical attack allegation
The opposition Syrian National Coalition on Wednesday denied Russian allegations that rebel fighters fired a projectile laden with the nerve agent sarin at a suburb of Aleppo in March, saying United Nations inspectors should be allowed to investigate the attack. The government and rebels have blamed each other for that incident, as well numerous other alleged chemical attacks. [Reuters, 7/10/2013]

Syrian rebel sheikh calls for war on Assad’s Alawite heartland
An influential Islamist cleric turned rebel commander urged Syrian insurgents on Wednesday to focus their war on President Bashar al-Assad’s Alawite heartland to create a "balance of terror" and help turn the tide of the conflict. "One has to concentrate on their strongholds and on their dwellings and their infrastructure. If [Alawites] continue living as they’re doing in peace and safety while wedded to the regime… they will not think of abandoning Assad," said Islamist Sheikh Anas Ayrout. [Daily Star/Reuters, 7/10/2013]

Al-Qaeda tries to control areas liberated by Free Syrian Army
Confrontation between al-Qaeda, which goes by the name of the Islamic State of Iraq and the Levant (ISI), and the Free Syrian Army (FSA) is escalating in areas near the Turkish border. Abu Osama al-Tunisi, the leader of al-Qaeda in Syria, posted the names of wanted FSA members on the doors of mosques in Dana and Dar Azza, near the Turkish border crossing of Bab al-Hawa, following a confrontation last week between al-Qaeda members and demonstrators in Raqqa calling for the departure of the group. [Al Monitor/Azzaman, 7/10/2013]

Corruption rife and growing, poll finds
Results of a Transparency International survey released this week revealed that a stark majority of Tunisians – more than 80 percent – believe that the level of corruption in their country has increased, rather than decreased, since the 2011 revolution. The study also reveals that many Tunisian citizens themselves continue to contribute to corruption on a daily basis, while simultaneously demanding that their elected officials combat it. [Tunisia Live, 7/11/2013]

President appoints controversial new mufti
Interim President Moncef Marzouki replaced Monday the country’s mufti with Hamda Said, a controversial, pro-polygamy religious scholar, which some rights activists consider a threat to the country’s long-standing personal freedoms. The replacement of Mufti of the Republic Othman Battikh a few days before Ramadan has stirred wide debate among Tunisians, many of whom have expressed concern about the messages being delivered by religious leaders in the country’s mosques. [Magharebia, 7/10/2013]

Attacks on electricity lines leave Sanaa in the dark, again
Another attack on Marib Power Gas Station power lines in Marib’s al-Damashiqa district left Sanaa and other governorates without electricity on Monday. It was the third attack within twenty-four hours, and it cut all power from the first and second electrical circuits, said Harith al-Amri, the deputy manager of Public Electricity Corporation. The state has spent about YR 3.3 billion, or $15.3 million, on repairs since the beginning of 2013, said al-Amri. [Yemen Times, 7/11/2013]

Jamal Bin Omer: Houthis suggested a ‘rescue-government’ representing all factions
In an interview with Yemen News Agency, United Nations Special Envoy to Yemen Jamal Bin Omer said that Yemen is amid a pivotal moment in its transition. The National Dialogue Conference will determine Yemen’s new constitution, and decisions made in this coming period are in effect part of the constitution-drafting process. Speaking about his recent visit to Saada where he met with the Houthis, Bin Omer said that the Houthis suggested building a new unity government that encompasses all political factions, instead of the current government which only represents the political parties that signed the Gulf Cooperation Council Initiative. [Al Masdar (Arabic), 7/11/2013]

Hezbollah critical of March 14 coalition; Syrian rebel group claims Beirut bombing
Hezbollah parliament member Hussein Musawi said Wednesday that fiery rhetoric led to the bombing that ripped through Beirut’s southern suburb and will cause more bloodshed. Musawi also criticized his rivals in the March 14 coalition, saying their refusal to join a government which includes Hezbollah is deluded. A little-known Syrian rebel group named the Special Forces 313 Brigade has claimed responsibility for a car bomb attack that hit Hezbollah’s stronghold in the southern suburbs of Beirut on Tuesday. It also claimed it was behind an attack on a Hezbollah convoy in eastern Lebanon on June 28 and lashed out at the Lebanese state, which it said actively assists Hezbollah. [Ya Libnan, Al Ahram, Lebanon Daily Star, 7/10/2013]

Lebanon vows to keep borders open to Syrian refugees
Lebanon vowed Wednesday to keep its borders open to Syrian refugees as the United Nations Security Council called for “unprecedented” international help for the country. Lebanon’s United Nations ambassador Nawaf Salam stated that the country would not close its frontier but that it desperately needs international assistance. “Lebanon will not close its borders. Lebanon will not turn back any refugee, Lebanon will continue to provide assistance to all Syrian refugees,” Salam told reporters after the Security Council met to adopt a statement on Lebanon. [Al Arabiya, 7/10/2013]

Amman residents were due as of midnight Wednesday to start receiving Disi aquifer water, the government said on Wednesday. Minister of Water and Irrigation Hazem Nasser called on citizens to continue rationing water consumption, taking into consideration the pressure on Jordan as a result of the influx of hundreds of thousands of Syrian refugees and other expatriates. Jordan said that gas supplies from Egypt will resume within ten days following sabotage to the export pipeline by militants in the Sinai Peninsula. "The Egyptian authorities are expected to resume gas supplies to Jordan in a week or ten days," Jordanian Energy Minister Malek Kabariti told state-run Petra news agency after a cabinet meeting. [Jordan Times, Al Ahram, 7/10/2013]