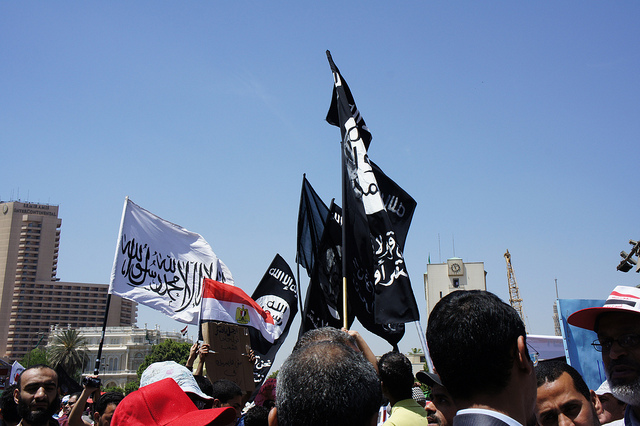 Thousands of Egyptian hardline Islamists marched from a mosque in a Cairo suburb on Thursday night to the state security headquarters to protest against what they said was a return to the force’s pre-revolution methods.

Pakinam Sharqawy refuses position of Deputy Prime Minister
Presidential sources revealed that Dr. Pakinam Sharqawy, assistant to the president for political affairs, refused an offer for the position of deputy to the prime minister. The source added that her refusal is causing the Muslim Brotherhood to consider Dr. Osama Yasin, youth minister, or Mohammed Ali Bishr, minister of domestic development, for the position. The source added that despite the cabinet shuffle of 6 ministers, Gen. Mohammed Ibrahim, interior minister, and Mostafa Masaad, minister of higher education, will remain in their positions. [El Watan (Arabic), 5/3/2013]

Court jails supporters of black-clad Egypt protest group
Six men were jailed by a Cairo court on Thursday in the first ruling against a little-known group opposed to Islamist President Mohamed Morsi that the government has accused of participating in "terrorist acts". The men, aged from 19 to 25, were convicted of attacking security forces and damaging court and police property, and each sentenced to five and a half years in prison, state newspaper Al-Ahram said. [Reuters, 5/3/2013]

Public funds prosecution considers new settlement with fugitive businessman
Egypt’s public funds prosecution is currently considering a new request filed by fugitive businessman Hussein Salem for financial settlements to drop corruption charges against him. The request included allowing Egypt to acquire 75 percent of Salem’s assets and funds inside Egypt and 55 percent of his assets and funds outside of the country. It also entitles the government get 100 percent of the funds and assets that may be discovered in the future after Salem’s settlement with Egypt. Prosecutor General Talaat Abdullah is to give a final decision on the matter on Saturday. [Aswat Masriya, SIS, 5/2/2013]

Activist to Be Tried for Insulting Egypt President
Prominent Egyptian activist Ahmed Douma was arrested and immediately referred to trial for allegedly insulting the country’s president in a TV interview, a prosecutor said Thursday. Douma is to stand trial on Sunday — less than a week after being arrested. He is the first prominent opposition activist to be tried on charges of insulting Islamist President Mohammed Morsi. Rawda Ahmed, a lawyer for the Arab Network for Human Rights Information which is part of Douma’s defense team, said the activist was swiftly referred to trial before his lawyers had a chance to see the charges or find out where he was held. [AP, 5/2/2013]

Egypt’s main IMF negotiator stays in post
A senior Egyptian finance ministry official involved in talks with the International Monetary Fund on a $4.8 billion loan is continuing in his post, the government said on Thursday, reversing an earlier announcement that he had resigned. Hany Kadry Dimian, who has been the point man in Egypt’s protracted and so far fruitless negotiations to obtain a $4.8 billion loan from the IMF, had told Reuters on Sunday that he had quit his post but gave no explanation for his decision. Cabinet spokesman Alaa El Hadidi said Dimian was continuing his duties "particularly because the IMF negotiations are nearing completion". After the announcement of Kadry’s resignation, the finance minister appointed his economic adviser Abdallah Shehata to manage negotiations with the IMF, state news agency MENA said on Tuesday. Thursday’s statement made no mention of Shehata. [World Bulletin, Reuters (Arabic), 5/2/2013]

Rights centre: 1462 protests in Egypt during April
Egypt witnessed 1462 protests during April, making it the top country worldwide in number of protests during that month, a report for the International Development Centre (IDC) has said. April’s record number compares with 1354 protests in March and 864 in February. Forty-seven categories of Egyptians staged the protests. Economic and social demands were the major drive for 62.4 percent of the protests. The main demands of these protests included releasing detainees and toppling the regime.[Aswat Masriya, Ahram (Arabic), 5/3/2013]

Thousands of Egypt’s Islamists protest against state security
Thousands of Egyptian hardline Islamists marched from a mosque in a Cairo suburb on Thursday night to the state security headquarters to protest against what they said was a return to the force’s pre-revolution methods. The protest points to lingering suspicion harboured by the hardliners about security agencies used against them by ousted President Hosni Mubarak, and which, they say, Islamist President Mohamed Morsi has been unable to reform. Several Salafi Islamist groups issued a statement earlier in the day saying state security organs had returned to "criminal practices" such as summoning citizens for investigation, threatening the achievements of the 2011 uprising. [Reuters, 5/2/2013]

Egypt among 15 worst violators of religious freedom: report
Egypt is one of the 15 worst violators of religious freedom, according to a report released by the United States Commission on International Religious Freedom (USCIRF). The report included Egypt in the “Tier 1” of its findings, in a category named “countries of particular concern.” The USCIRF says that those countries are ones in which “governments…have engaged in or tolerated ‘particularly severe’ violations of religious freedom.” The report includes findings ranging from 31 January 2012 to 31 January 2013. Egypt “continues to prosecute, convict, and imprison Egyptian citizens including Copts and dissenting Muslims, for ‘contempt’ or ‘defamation’ of religion.” [DNE, 5/2/2013]

Egypt signs deal to host UN regional office for women
Egypt and the United Nations signed an agreement to host the UN regional office for women in Cairo. Moataz Ahmadein Khalil, Egypt’s permanent representative to the UN, and Lakshmi Puri, Acting Head of UN Women, signed the deal. Through the new office, the UN will contact with Arab governments, non-governmental organizations, and Arab think tanks to support women’s rights in the region. [SIS, 5/3/2013]