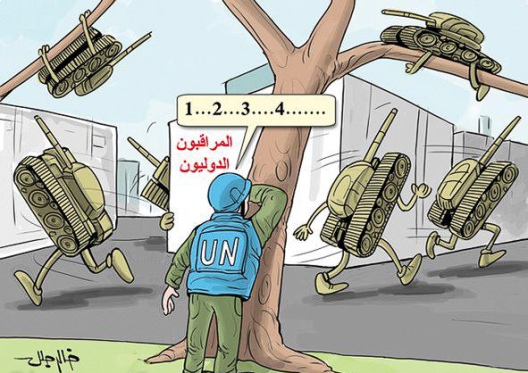 Unidentified snipers shot at UN experts on Monday, forcing them to suspend their attempt to investigate claims that chemical weapons had been used near Damascus. UN weapons investigators were due on Monday to inspect the site of a suspected chemical attack which killed at least 1,300 people last week in Damascus suburbs.
EGYPT

Islamist groups seek truce
An initiative led by Egypt’s Jama’a Islamiya and Islamic Jihad movements announced Monday aims to bring dialogue between the military and the Muslim Brotherhood. The groups do not speak for the Brotherhood, but the initiative is a new sign of flexibility from the pro-Morsi alliance of mostly Islamist groups. Top Muslim Brotherhood negotiator Amr Darrag said that the group is open for talks but after “confidence-building measures.” [AP, Ahram Online, 8/26/2013]

Egypt government acknowledges shortages in energy and supply goods
Egypt is currently suffering from multiple shortages in both energy and supply goods, and will seek to address such crises in cooperation with “friendly” nations, according to Prime Minister Hizam El-Beblawi. El-Beblawi said such countries would help Egypt address its budget deficit and high spending costs via long term partnerships that would last until the end of next year. He further added that no economy can develop in the absence of peace and stability. [DNE, 8/25/2013]

Fahmy defends roadmap progress to Kerry
Minister of Foreign Affairs Nabil Fahmy defended Egypt’s progress in its political roadmap to US Secretary of State John Kerry, and discussed a number of topics of interest between the two countries in a Friday phone call. Fahmy also told Kerry that the Committee of Experts had drafted an amended constitution that would be given to a committee of 50 to approve, and would be followed by a constitutional referendum and elections. [DNE, 8/24/2013]

Libya launches national dialogue initiative
Prime Minister Ali Zidan announced the launch of a national dialogue initiative to tackle issues ranging from national reconciliation to disarmament. The commission to oversee the dialogue will be independent from the government and the General National Congress. The UN Support Mission in Libya (UNSMIL) said it is ready to lend technical expertise and support to the initiative. UNSMIL and the Libyan Fatwa Authority have cleared a misunderstanding after the latter accused the UN of dividing the country. [AFP/Gulf News, 8/25/13]

Breakthrough arrests in Benghazi murder campaign
A group of men suspected of being involved in the recent wave of assassinations and attacks in the eastern city of Benghazi has been arrested and sent to Tripoli, according to the city’s Joint Security Room. Authorities have not revealed how many they are or their nationalities. The violence continued as gunmen murdered a senior criminal investigator, Colonel Mostafa Oukeila, on Friday and clashes erupted Thursday between armed groups. [Libya Herald, 8/25/13]

Heavy fighting west of Tripoli leaves many dead, wounded
At least ten people were killed and twenty more wounded after three days of fighting between the Zawia and Warshefana tribes. Prime Minister Ali Zidan called on the parties to stop the fighting and said the continued violence was due to weapons proliferation. Clashes ended as the government sent in army units, but residents say the situation remains tense. [Tripoli Post, 8/25/13]

Justice and Construction Party: “We do not control GNC”
The Justice and Construction (J&C) Party has refuted claims that they control the General National Congress (GNC) and exert undue influence in the government, dismissing them as “slanderous.” Party spokesman Salim Baitalmal said those targeting the party are seeking to mislead the public, as the J&C Party constitutes only fifteen percent of the GNC. Mahmoud Jibril’s National Forces Alliance suspended its GNC activities earlier this month in protest of the chamber’s failure to advance the constitutional drafting process. [Libya Herald, 8/24/13]

UN mission suspended after being targeted by snipers
Unidentified snipers shot at UN experts on Monday, forcing them to suspend their attempt to investigate claims that chemical weapons had been used near Damascus. UN weapons investigators were due on Monday to inspect the site of a suspected chemical attack which killed at least 1,300 people last week in Damascus suburbs.  [ Al Jazeera, Al Arabiya, 8/26/2013]

Britain, Turkey say Syria response possible without UN backing
Both Britain and Turkey said on Monday that it would be possible to respond to chemical weapons use in Syria without the unanimous backing of the United Nations Security Council.
In an interview with BBC radio, British Foreign Secretary William Hague made the remarks on the possibility of his country’s response to the alleged chemical attack in Syria last week. [Al Arabiya, 8/26/2013]

Assad to US: another Vietnam awaits you in Syria
President Bashar al-Assad warned the US of “failure” if it attacks Syria, as UN experts were Monday to begin probing allegations Syrian forces used chemical weapons on civilians. Assad told pro-Kremlin daily Izvestia that the frontline in the area where the incident took place was not clear and the Syrian regime would have risked killing its own troops if it used chemical weapons. [Middle East Online, 8/26/2013]

Car bomb kills Hama governor
The governor of Hama province in central Syria was killed in a car bombing on Sunday, state television reported, in an attack it blamed on rebels.Naem was appointed to the post in July 2011, four months after the beginning of the revolt against President Bashar al-Assad’s regime. [Middle East Online, 8/25/2013]

In new deal, Ennahda agrees to caretaker government
In a tentative agreement to solve the country’s political crisis, Ennahda and the Democratic Alliance party reached a deal Sunday that would allow the Islamist-led government to stay in power ahead of elections for a technocratic, caretaker government. The National Constituent Assembly will be charged with finalizing the draft constitution and electoral law, at which point the government led by Ali Larayedh will be replaced with caretaker government with a mandate to hold new elections. [Tunisia Live, 8/26/2013]

Opposition demands government leave in weekend protest
Thousands of Tunisians crowded Bardo Square in Tunis on Saturday to put pressure on the Islamist-led government to step down as it works towards crisis negotiations with the secular opposition. The protest, meant to kick off a week of rallies against the ruling Ennahda party known as “Rahil,” brought together about 10,000 protesters according to police estimates. [Reuters, Tunis Times, 8/25/2013]

Ghannouchi: government won’t dissolve before national dialogue
In an interview Sunday with Nessma TV, the leader of Ennahda party, Rachid Ghannouchi, reaffirmed that the Islamist-led government would not step down before “committing a serious dialogue” among the country’s political factions, as proposed by the Tunisian General Labor Union. Ghannouchi also reaffirmed that the current government would not review the controversial political isolation law before the next elections. [Mosaique FM (French), 8/25/2013]

Minister of health a ‘rising star’
Hearing him speak these days, one would think that Abdellatif Mekki is the spokesman for Ennahda instead of simply the minister of health. Mekki is one of the most daunting hawks among Ennahda’s party membership, and his fiery attacks on the opposition have made him a close associate the party’s leader. [Al Monitor, 8/25/2013]

President Hadi: security cooperation came after attacks of 9/11
The US ambassador to Yemen endorsed remarks by President Hadi saying that security cooperation between Yemen and the United States dates back to the events of 9/11.  Hadi pointed to the attacks on Sunday on air force personnel in Sanaa as evidence that al-Qaeda in the Arabian Peninsula remains a powerful threat to Yemenis. [Al Masdar (Arabic), 8/26/2013]

Cabinet reviews steps to carry out proposals by NDC technical committee and Southern issue working group
The cabinet reviewed on Sunday executive steps to carry out the twenty points proposed by the National Dialogue Conference’s (NDC) preparatory technical committee and the eleven points approved by the NDC’s Southern issue team concerning the trust-building measures. In an extraordinary meeting chaired by Prime Minister Mohammed Salem Basindwa, the cabinet discussed the steps proposed by the ministerial committee formed by the cabinet in July to implement the remaining points. [Saba News, 8/25/2013]

Jordan to host army chiefs for Syria talks
Military commanders from Western and Muslim countries are meeting in Jordan to discuss the Syria conflict, as Western powers weigh military action in response to a suspected chemical weapons attack. The meeting, which was expected to start late on Sunday, came at the invitation of Jordan’s chief of staff Meshaal Mohamed al-Zaban and General Lloyd Austin, head of Centcom, the US command responsible for twenty countries in the Middle East and Central Asia. [Al Jazeera, 8/26/2013]

Iraqi government downplays violence after forty-eight die in attack on Sunday
A series of attacks in Baghdad and north Iraq killed forty-eight people on Sunday amid a surge in violence that authorities have failed to stem despite wide-ranging operations targeting militants. The government has downplayed the number of deaths from attacks in its official statements, even as violence in Iraq has reached levels not seen since 2008. [Middle East Online, Al Arabiya, 8/26/2013]