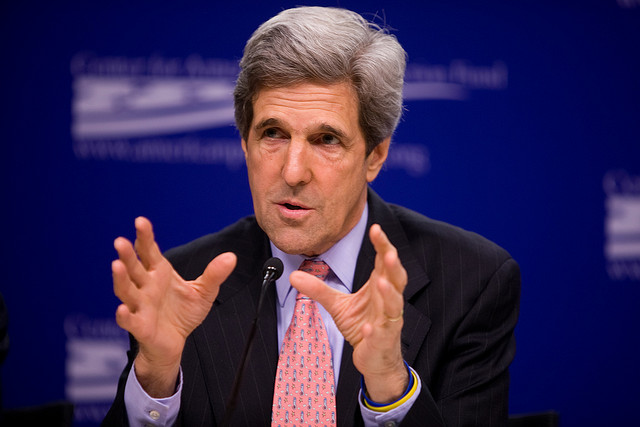 Egypt may have avoided a civil war this month, United States Secretary of State John Kerry said on Wednesday, saying this was one factor to weigh as Washington decides whether to cut off most US aid to the Arab nation. Kerry repeated the US position that it has not yet made any decision, saying it would take its time, consult its lawyers and get all the facts.

Presidency announces transitional period to last nine months
The transitional period that includes constitutional amendments, parliamentary elections and ends with presidential elections is expected to finish within nine months, said Mostafa Hegazy, presidential advisor for political affairs. In a press conference at the presidential palace on Wednesday, Hegazy announced that the roadmap detailed in the constitutional declaration released last week is beginning to come to shape, reported state-run Al-Ahram. He also said the state will not apply extraordinary measures in the face of pro-Morsi sit ins. Hegazy further announced that communications with all political forces including the Muslim Brotherhood and their political party will start next week in the initial steps towards national reconciliation. Meanwhile, a member of the Muslim Brotherhood’s Guidance Bureau and former Local Development Minister Mohamed Ali Beshr told the European Union’s High Representative for Foreign Affairs and Security, Catherine Ashton that any national reconciliation should take place only after Morsi returns to power. [DNE, SIS, Ahram Online, Egypt Independent, 7/18/2013]

April 6 rejects Mubarak-era ministers as cabinet begins work
The April 6 Youth Movement (the Ahmed Maher Front) expressed its rejection of Egypt’s new Cabinet headed by Prime Minister Hazem el-Beblawi, as it includes a number of ministers from the former Mubarak regime. The appointments included figures who were once members in the policies committee in Mubarak’s National Democratic Party, such as new minister of information Dorreya Sharaf al-Din. Meanwhile, taking up her post, Sharaf al-Din said that her primary concern is a law governing the media, commenting on the fact that Egypt does not yet have a freedom of information act. She added that it is her hope that civil society can serve as a watchdog over Egyptian media. Newly-appointed Culture Minister Saber Arab revealed plans to turn back on decisions made by his predecessor Alaa Abdel Aziz. Former Cairo Opera House director, Inas Abdel Dayem, would be reinstated, Arab said Wednesday. According to Arab, other officials who would regain their posts include Said Tawfik, who had resigned as chairman of the Supreme Council of Culture in protest at Abdel Aziz’s decision, as well as Kamilia Sobhy, the ministry’s external relations official. Egypt’s Minister of Foreign Affairs Nabil Fahmy froze his membership in the Dostour Party after he was appointed minister, the Middle East News Agency reported. [Ahram Online, Egypt Independent, Shorouk (Arabic), 7/18/2013]

Over 400 pro-Morsi protesters detained by Egypt prosecution
Egypt’s general prosecution detained 406 supporters of deposed President Mohamed Morsi pending investigation following violence that erupted during pro-Morsi rallies on Monday night. Three hundred and thirty-six protesters were also detained pending investigation following clashes that erupted during a pro-Morsi protest in the Cairo district of Bab al-Shareya and downtown Cairo’s Ramsis Square. Suspects have been detained for between four and fifteen days pending investigations into charges of committing acts of violence, as well as trying to storm the Azbakeya police station and firing on police officers. Meanwhile, five pro-Morsi protesters in Raba’a al-Adaweya Square were referred to criminal court on charges of detaining a citizen inside a locked room, torturing and physically assaulting him, and cutting off his finger, after they suspected that he had stolen a cell phone from another protester. [Ahram Online, Egypt Independent, 7/17/2013]

Brotherhood leaders’ detention renewed
The detention of four Muslim Brotherhood leaders was renewed for an additional fifteen days on Wednesday. Deputy Supreme Guide of the Brotherhood Khairat al-Shater, Freedom and Justice Party (FJP) head Saad al-Katatni, former Supreme Guide Mahdi Akef and senior Brotherhood leader Rashad Bayoumi, have all been accused of inciting violence against protesters in front of the Brotherhood’s headquarters on June 30, reported Aswat Masriya. Giza Prosecution renewed the detention of Salafi Raya Party leader Hazem Salah Abu Ismail and other Islamist figures for fifteen days pending investigations into charges of murder, attempted murder and intimidation of citizens during the Bein al-Sarayat clashes. Freedom and Justice Party leader Helmy al-Gazzar, Muslim Brotherhood-affiliated lawyer Abdel Moneim Abdel Maqsoud and former MP Mohamed al-Omda have also been held by authorities. Egypt’s general prosecution has also ordered the arrest of Essam Sultan, former member of parliament and leading member of the Islamist Wasat Party, on charges of insulting the judiciary. Sultan appeared before the prosecution for those charges on May 29 and was released on bail. [DNE, Egypt Independent, Ahram Online, 7/17/2013]

Investigations into judges accused of electoral fraud postponed
Magdy Hussein Abd al-Khaliq, head of the Cairo Criminal Court decided on Thursday to postpone the completion of the investigation in the case filed against twenty-two judges and prosecutors accused of rigging parliamentary elections in 2005 and 2010. The case was postponed because a lawyer failed to submit documents to the court. [Ahram (Arabic), 7/18/2013]

Cabinet to issue ‘roadmap’ to economic recovery
Egypt’s newly formed government plans to announce an economic “roadmap” to govern the transitional period after President Mohamed Morsi’s ouster, said Ashraf al-Araby, who has been retained as minister of international cooperation and planning after serving in the same position in former Prime Minister Hisham Qandil’s Cabinet. Financial assistance from the Gulf will make the transitional period “easy” for the government, Araby said but added that the aid package is not an alternative to the long-awaited International Monetary Fund (IMF) loan. Araby expects talks with the IMF to resume once the domestic situation “stabilizes," stressing the need for structural reforms to the Egyptian economy. Meanwhile, newly appointed minister of finance, Ahmed Galal said on Wednesday that an IMF loan was only "part of the solution" to the country’s problems and the new transitional government would have to draw up a plan that would start to fix the troubled economy. [Mada Masr, Reuters, 7/17/2013]

Islamists continue protests, try to reconcile with Raba’a residents
The National Alliance for Supporting Legitimacy (NASL), a recently founded Islamist group that is one of the main organizers of pro-Morsi protests, organized several marches from Raba’a al-Adaweya Mosque to the Republican Guard headquarters on Wednesday. The pro-Morsi sit-in has entered its sixteenth day. On Thursday, the army closed the Cairo University Bridge, blocking a pro-Morsi rally from leaving Nahda Square. Meanwhile, protesters camped by the Raba’a al-Adaweya Mosque issued a letter apologizing to residents on Thursday for the harms they have inflicted on the Nasr City neighborhood. The apology came hours before a deadline granted to them by the residents to clear side roads and rally in two of the main roads instead. A statement by the NASL assured residents that they would meet their requests and fix the damages for which they are responsible. Despite the conciliatory letter, Morsi’s supporters vowed to remain in their sit-in until the deposed president is reinstated. Meanwhile, Sheikh Abu Islam, sentenced prior to Morsi’s ouster to eleven years hard labor for burning a bible, was seen at the Raba’a sit-in after the postponement of his imprisonment.  [Aswat Masriya, Mada Masr, Ahram Online, Ahram Gateway (Arabic), Youm7 (Arabic), Ahram Gateway (Arabic), 7/18/2013]

Tamarod, Brotherhood call for Friday protests
Tamarod called for protests on Friday to mark the anniversary of the 10th of Ramadan 1973 war with Israel. In an online statement, Tamarod said ‘The People against Terrorism‘ protest would call for a continuation of the June 30 revolutionary wave and for the fulfilment of the aims of the January 25 Revolution. It will also condemn the "terrorism" of the ex-president’s supporters, in reference to attacks that have killed at least four members of the security forces in the Sinai Peninsula in recent days. Tamarod also called on the Brotherhood youth to stop protesting and called on security to continue to fight terrorism. Mohamed Abdel Aziz announced that Tamarod would be shifting its focus to political pressure on rebuilding Egypt. They are starting with the campaign, “Your Constitution First.” [Ahram Online, Ahram (Arabic), 7/18/2013]

Deadly conflict between militants, security in Sinai
Ten Islamist militants were allegedly killed by the armed forces on Wednesday, reported state-run Middle East News Agency. Military sources claimed the killings occurred as part of the military’s campaign to end militant activities in the peninsula. Additionally three policemen were killed and two were seriously injured in an attack by unknown gunmen in Sheikh Zuweid neighborhood late on Wednesday. Armed men fired at Abdel Aziz Ata Mahmoud, 37, a policeman in the Central Security Forces, on his way home and he died and was transferred to the Arish Public Hospital. Another policeman was killed in front of a police station in Arish when armed men riding in a car shot at him. Mahmoud Hanafy Mohamed, 23, received a shot in the neck and died upon arriving at the Military Hospital. The assailants fled the scene. Mohamed Said Metwally, 34, died after being injured in an armed attack on the Sheikh Zowaid Police Station. Another two policemen, Mohamed Ismail al-Fakharany, 37, and Mohamed Ahmed, 43, were transported to the Arish Public Hospital with injuries. The assailants also fled the scene. Meanwhile, elements of the Egyptian Third Field Army have intercepted a van containing a total of nineteen grad rockets heading for Cairo, state-run Al-Ahram stated on Wednesday. The rockets were reportedly found as the vehicle was searched at a security checkpoint between Suez and Cairo. The driver of the vehicle was found to be in possession of an automatic rifle, complete with a magazine and twenty-one rounds. [Mada Masr, Aswat Masriya, DNE, Egypt Independent, 7/18/2013]

United States suggests Egyptian military may have averted civil war
Egypt may have avoided a civil war this month, United States Secretary of State John Kerry said on Wednesday, saying this was one factor to weigh as Washington decides whether to cut off most US aid to the Arab nation. Kerry repeated the US position that it has not yet made any decision, saying it would take its time, consult its lawyers and get all the facts. "The fact is we need to take the time necessary because of the complexity of the situation to evaluate what has taken place … So that’s exactly what we are doing right now, and I’m not going to rush to judgment on it," he said. Meanwhile, the United States reiterated its call for a quick return to a sustainable democracy, according to a White House press briefing on Wednesday. White House Press Secretary Jay Carney said the United States has made it clear to Egypt’s interim authorities that a quick return to a democratically elected civilian government, one that is inclusive and represents all Egyptians, is “the answer to a better future for Egypt.” Carney said the United States is engaging with Egypt’s interim authorities. “Our interests and support is not for an individual party or group,” he said. [Reuters, Ahram Online, DNE, SIS, 7/18/2013]

Egypt’s Brotherhood says EU has no offer for crisis, EU urges release of Morsi
A senior figure in ousted President Mohamed Morsi’s Muslim Brotherhood met European Union’s foreign affairs chief in Cairo on Wednesday and said Brussels had offered no proposal that could resolve Egypt’s political crisis. Catherine Ashton met with representatives of the anti-Morsi petition drive ‘Rebel’ as well as representatives of the Muslim Brotherhood. "My message was clear that the European Union largely supports the Egyptian people and would like Egypt to see a smooth transition to democracy," she added. She urged Egypt’s interim leaders to free Morsi and also urged the interim leaders and supporters of the ousted Islamist president to cooperate in a political process that moves the country toward democracy. [Reuters, Ahram Online, Egypt Independent, Mada Masr, SIS, AP, Ahram (Arabic), 7/18/2013]