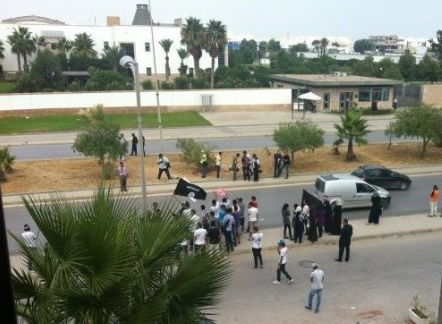 The US embassy in Tunisia said it is “deeply troubled” that the twenty people convicted of attacking the embassy last year only received suspended sentences.

Law combating violence against women submitted to presidential legal committee
Presidential Advisor for Women’s Affairs Dr. Omayma Kamel said that a draft law protecting women has been submitted to the president’s legal advisory committee, after which it can be submitted to the legislative committee. She said that the law, part of a presidential initiative to support the rights and freedoms of women, aims to protect women from domestic and public violence, adding that security is just one issue to address in order to resolve the problem. [EGYNews, ONA (Arabic), Shorouk (Arabic)]

Suspect in kidnapping of security police and soldiers arrested
Egyptian authorities have arrested a first suspect in connection with the kidnapping of seven security police and soldiers two weeks ago by Islamist militants in Sinai, security sources said on Thursday. Police located the internet café where the kidnappers uploaded the video of their demands and arrested the café owner, the Ministry of Interior announced Wednesday. [Reuters, DNE, Ahram (Arabic), Shorouk (Arabic)]

Output at Libya’s El Feel oilfield shut down – sources
Production at Libya’s major El Feel oilfield has been shut down as a precaution due to a protest at the site, three industry sources said on Thursday. "A decision was made to start shutting down yesterday. At midnight there was no production," a source at the field in southwestern Libya, told Reuters by phone. [Reuters]

Libya becomes ‘the new Mali’ as Islamists shift in Sahara
Security officials say lawless southern Libya has become a haven for al Qaeda-linked fighters after French-led forces drove them from strongholds in northern Mali this year. "The south of Libya is what the north of Mali was like before," said a senior adviser to Mali’s interim President Diouncounda Traore, asking not to be named. [Reuters]

Turkey arrests twelve in raids on "terrorist" organization
Turkish authorities have arrested twelve people on suspicion of being members of a terrorist organization in raids across the country, a provincial governor said on Thursday. Several Turkish newspapers allege that the suspects are from Syria’s al-Qaeda-linked al-Nusra Front who allegedly had been planning an attack inside Turkey and were in possession of 2 kg (4.5 pounds) of sarin. [Reuters, Today’s Zaman]

Russia suggests it will now sell offensive weapons to Syria
Russian Defense Minister Sergei Shoigu said that, due to the European Union’s decision to allow arms sales to rebels, the Kremlin may ‘revise’ its vow not to sell the Syrian government ‘offensive’ weapons.  Russia may supply ten ultra-modern MiG-29 fighter jets to Syria under a possible contract being discussed with a visiting delegation from Damascus. [CSMonitor, NOW]

United States troubled by verdicts in embassy attack
The US embassy in Tunisia said it is “deeply troubled” that the twenty people convicted of attacking the embassy last year only received suspended sentences. A mob of some 2,000 people, mostly religious conservatives, attacked the compound on September 14, 2012, destroying cars, property, burning the American flag, and setting fire to a nearby American school, ostensibly in response to a movie in the United States that allegedly insulted Islam. Four protesters died in the attack. [Al Arabiya]

Tunisia intervenes to lift dinar from record low
Tunisia’s central bank said it intervened in the country’s foreign exchange market this month to support the local dinar after it fell to a record low. The north African country’s regulator sold the equivalent of 863 million dinars ($524 million) to the market in the week to May 17. [Bloomberg]

President Marzouki will not attend NCA impeachment hearing
Presidential spokesperson Adnen Mansar announced today that the president will not appear at an National Constituent Assembly (NCA) plenary session that he was invited to attend; a motion of censure summoned him to appear at the session in order to answer NCA members’ questions before they vote on whether to remove him from office. [Tunisia Live]

President Marzouki: Tunisia a democracy in five years
President Moncef Marzouki stated that Tunisia is progressing since the end of the revolution, and it will be a state of true democracy in 2018, in a speech delivered at the Economic Policy Research Foundation of Turkey (TEPAV) in Ankara. [The North Africa Post]

Lawmaker denies connection to kidnapping
A Yemeni lawmaker has denied involvement in the abduction of two South African nationals in the city of Taiz after authorities accused him of orchestrating the kidnapping to pressure authorities to give him a disputed piece of land. Abdul Hamid Al Batra on Wednesday described accusation as “baseless” and said authorities were trying to cover up their failures in protecting foreigners. [Gulf News/AP]