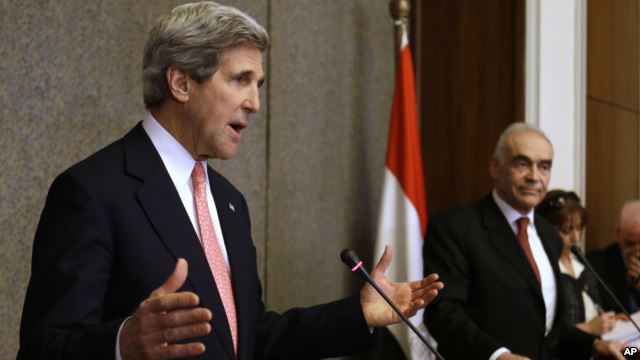 US Secretary of State John Kerry voiced concern Tuesday about the sentences handed down by a Cairo court on 43 Egyptian and foreign NGO workers, denouncing it as a "politically-motivated" trial.

Egypt’s live TV coverage of Nile crisis meeting draws fire
A host of unguarded statements made at a meeting between Egyptian President Mohamed Morsi and political figures held to discuss the Ethiopia dam ‘crisis’ have prompted a wave of criticism against Egypt’s already-under-fire government decision-makers. Some suggestions heard from participants included sabotaging the dam, interfering in internal political disputes in Ethiopia, or bribing local tribes, with the aim of prohibiting any potential reduction in Egypt’s annual share of the Nile waters. An Egyptian presidential spokesperson denied reports that Ethiopia filed a complaint with the UN Security Council over comments made at President Morsi’s meeting on Ethiopia’s Renaissance Dam. Mohamed ElBaradei, National Salvation Front Coordinator, called on President Mohamed Morsi to apologize to Ethiopia and Sudan for “the irresponsible utterances” made during the national dialogue session. Salafi Nour Party spokesman Nader Bakkar expressed his discontent with opposition leader Mohamed ElBaradei after the latter issued an apology to Ethiopia. Hamdeen Sabbahi also criticized the discussion and said the crisis should be managed by experts. Meanwhile, the cabinet met to discuss developments relating to the dam and its potential impact on Egypt. [Ahram Online, Egypt Independent, Shorouk (Arabic), EGYNews (Arabic), 6/5/2013]

Shura Council committee approves NGO law in principle
The Shura Council’s Committee for Manpower and Local Administration has approved the draft NGO law in principle, following a meeting with representatives from the Social Affairs, Foreign Affairs and Justice Ministries, and the head of the General Federation of NGOs. Dr. Abdel Azim Mahmoud Abdel Aal, the head of the committee, announced that the law will now be discussed in a general Shura Council session. He also underlined the fact that current discussions on the NGO law have nothing to do with the recent NGO verdict sentencing 43 defendants to one to five years in prison. [Shorouk (Arabic), EGYNews (Arabic), 6/5/2013]

Criminal court asks prosecution to investigate fugitives in NGO case
The Cairo Criminal Court presented its ruling in the case of foreign funding for civil society organizations, issued against the twenty seven defendants in absentia sentenced to five years (including eighteen from the US and Egypt), and five other defendants present in court with two years, (an American, German and three Egyptians), and the remaining eleven Egyptian defendants with a suspended sentence of one year’s imprisonment. The legal reasoning presented by the court argues that the foreign funded organizations breached Egyptian sovereignty and called on the prosecution to quickly investigate those fugitives involved in the case. [Shorouk (Arabic), AMAY (Arabic), 6/5/2013]

Power cuts prompt protests, lawsuits
Ongoing power outages nationwide – which have coincided with sharply rising summertime temperatures – have prompted Egyptians in Upper Egypt and Nile Delta governorates to hit the streets in protest. A lawsuit was also filed by the Egyptian Centre for Economic and Social Rights (ECESR) in cooperation with the Arab Network for Human Rights Information (ANHRI), brought against high level government officials, including President Mohamed Morsi and Prime Minister Hesham Qandil. The groups demand government officials create a timetable naming the time and place power cuts will occur to establish fairness in power distribution. The electricity ministry has blamed the frequent blackouts on fuel shortages and an overloaded national electricity grid, as air-conditioning usage continues to increase amid ongoing heat waves. Electricity minister, Ahmed Imam, has said that electricity consumption in Egypt increases by 11 percent annually, 48 percent of which goes to houses. [Ahram Online, DNE, Aswat Masriya, 6/5/2013]

Egypt seeks French help with wheat imports: Source
France has received formal a request from Egypt for assistance in storing grain and easier payment terms for wheat imports, French official sources said, as the world’s largest wheat importer grapples with a prolonged economic crisis. France, the European Union’s top wheat exporter and one of Egypt’s leading suppliers, is studying the request and is open to helping Egypt on a vital food security issue, a diplomatic source said. A source at the foreign trade ministry however said it was too early to say whether France would approve the request. [Reuters, 6/4/2013]

EU delegation head visits south Sinai
Head of the European Union Delegation to Egypt James Moran has embarked upon a two-day trip to South Sinai where he is expected to visit EU-funded projects in the area. Moran will also meet with the governor of the region on Wednesday. During his visit Moran is expected to visit a variety of different projects in the governorate which have all received a share of a €64m investment. According to a statement published by the EU delegation, the projects include “a solid waste management facility, social and economic development centre for South Sinai Bedouin communities, handcraft centers, and programs for economic rehabilitation for people with special needs and women empowerment”. [DNE, 6/4/2013]

‘Rebel Week’ to intensify anti-Morsi campaign before protests on 30 June
The Rebel movement is working with other political groups to organize mass protests against President Mohamed Morsi and the Muslim Brotherhood on 30 June, its coordinator Mahmoud Badr said on Wednesday. Badr said the movement was also coordinating with other groups to launch ‘Rebel Week’ to collect more signatures stating people’s opposition to the president. Meanwhile, Yasser Borhamy, a top Salafi figure said on Tuesday night that he would join protesters calling on President Mohamed Morsi to step down if huge masses took to the streets on June 30.  “If millions of protesters take to the streets, I will ask the president to resign,” the vice president of the Salafi Call said, adding "this would be a constitutional way to remove him.” If Morsi refuses to step down then there will be an impasse, he said, expressing doubts, however, that there would be 13 million protesters in the streets as some predict. [Ahram Online, AP, Egypt Independent, 6/5/2013]

Christians come under attack, hold protest
Egyptian security and church officials say hundreds of Coptic Christians visiting a southern monastery have protested after coming under attack by unidentified assailants who stole their money and personal belongings and beat them. Officials say at least eight Christians, including a child, were hurt in the attack Tuesday night next to the entrance of Muharraq monastery in Assiut, 320 kilometers (200 miles) south of Cairo. The attackers used knives and clubs, officials said. Later, security forces cordoned off the area. [AP, Egypt Independent, Shorouk (Arabic), 6/5/2013]

Discussions surrounding Ethiopia’s Blue Nile dam continue
Ethiopian Water Resources Minister Alemayehu Tegenu sent a reassuring message to Egypt on Tuesday, asserting that his country’s planned Grand Renaissance Dam would not affect Egypt’s traditional supply of Nile water. However, Egyptian Irrigation Minister Mohamed Bahaa al-Din said that the project was sure to negatively affect the electricity-generating capacity of Egypt’s High Dam, adding that it would lead to a "disaster" for Egypt. Meanwhile, a spokesman for Ethiopia’s prime minister has downplayed suggestions by Egyptian politicians at a National Dialogue meeting that Egypt should sabotage Ethiopia’s new Nile River dam. He called the suggestions of attack or sabotage an "old failed concept." He also labeled it "day dreaming." A high profile Sudanese official said on Wednesday that Sudan is committed to the Nile waters agreement with Egypt, stressing that cooperation is the only means in the case of any disputes between the Nile Basin countries. France has also called on Egypt to continue to dialogue on the issue with Sudan and Ethiopia. Amr Moussa, Conference Party and the National Salvation Front (NSF) leader, held a two-hour meeting with the Ethiopian ambassador to Egypt on Monday to discuss “the situation between the two countries…[and] how to overcome the current tension caused by the dam and [its] possible consequences on Egypt’s share of the Nile [water]”. [Ahram Online, AP, Aswat Masriya, SIS, DNE, Shorouk (Arabic), 6/5/2013]

US, Germany, and rights groups slam Egypt’s NGO trial
US Secretary of State John Kerry voiced concern Tuesday about the sentences handed down by a Cairo court on 43 Egyptian and foreign NGO workers, denouncing it as a "politically-motivated" trial. "This decision runs contrary to the universal principle of freedom of association and is incompatible with the transition to democracy," Kerry said in a statement. The official spokesman for the French foreign ministry also expressed his concern over the verdicts delivered in the case. German Foreign Minister Guido Westerwelle has also condemned Tuesday’s verdict against the NGO workers, which included German nationals who worked for the Konrad Adenauer Foundation (KAS). The New York-based NGO, Human Rights Watch, added that the court’s ruling is based on "a repressive law as well as penal code provisions that do not respect basic rights." Amnesty International urged the Egyptian government to overturn the verdict. [Ahram Online, Aswat Masriya, Reuters, SIS, AP, Shorouk (Arabic), ONA (Arabic), Amnesty, 6/5/2013]