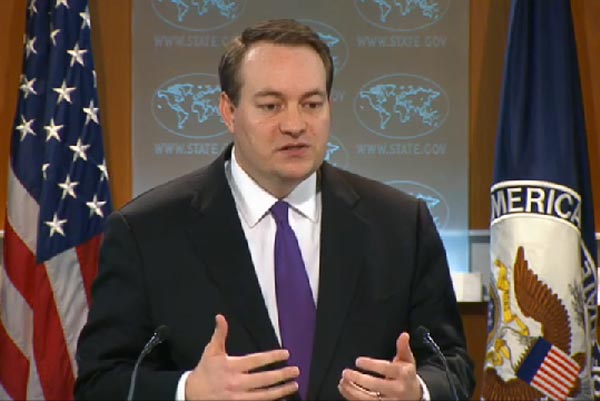 The Obama administration is calling on the Egyptian government to rein in prosecutions of political expression amid what it called a "growing trend" of efforts to punish and deter people from speaking their mind.

Presidency vows ‘decisive’ response to Sinai kidnappings, denies negotiations
Egyptian presidential spokesman Omar Amer on Monday asserted that Egypt would deal "decisively" with the recent kidnapping of seven Egyptian security officials in the Sinai Peninsula. The presidency expressed outrage at the video released by the Sinai kidnappers with Amer saying, “We have not negotiated and refuse the very idea. However, all options are available and we are considering several alternatives.” President Mohamed Morsi on Monday met with top officials – including the grand Imam of al-Azhar, Egypt’s grand mufti and church representatives – to discuss ongoing government efforts aimed at securing the release of the seven soldiers. Prime Minister Hisham Qandil said that everyone is exerting the maximum effort to ensure the safe return of the abducted soldiers [Ahram Online, DNE, SIS, Shorouk (Arabic), ONA (Arabic), AMAY (Arabic), 5/21/2013]

Salafist leader offers to negotiate with Sinai kidnappers; Jama’a Islamiya calls for release of Sinai prisoners
A delegation from Salafist Call – Egypt’s most powerful Salafist group – is seeking to communicate with the kidnappers of seven security personnel in the Sinai Peninsula, the group’s leader said on Tuesday. Salafist Call is willing to negotiate with the kidnappers via mediators from Bedouin tribes, Abdel-Moneim al-Shahat, who is based in Alexandria, told Turkish news agency Anadolu. "I believe the kidnappers think they have reached a point of no-return, but we [Salafist Call] have sent them a message stating there is still an opportunity [for negotiations], as was mentioned by the presidency," al-Shahat explained. Naser Abdel Salam, the head of the Jama’a Islamiya’s Construction and Development Party called on Morsi to release the Sinai prisoners, stating that Sinai residents have endured years of persecution. [Ahram Online, AMAY (Arabic), 5/21/2013]

Witness protection law, Social Affairs’ budget discussed in Shura Council
The Shura Council’s Committee on Legislative and Constitutional Affairs has discussed on Monday a draft law to protect of witnesses to crimes. In addition to witnesses, the law will also protect experts and people who report crimes from any harm that could be carried out against them. Lawyer Sayeda Qandil from the Front to Defend Egypt’s Protesters said that a law to protect witness has been greatly needed in Egypt. She alleged that witnesses to certain crimes are subjected to threats and pressures from the Ministry of Interior. The Shura Council Human Rights Committee also plans to discuss Ministry of Social Affairs’ budget on Wednesday [DNE, Shorouk (Arabic), ONA (Arabic), 5/21/2013]

International Association of Judges rallies behind Egypt’s judiciary
At an international conference focusing on the independence of Egypt’s Judiciary on Monday, the president of the International Association of Judges (IAJ) announced a new committee to investigate the feud between the judiciary and the government in Egypt. President of the IAJ, Gerhard Reissner, explained that the association plans to present a comprehensive report on the matter to the United Nations, after hearing from all parties, reported the state news agency.  The committee will also review the legality of the new judiciary law Many criticised the conference as a way of resorting to the international community in Egyptian affairs. [Aswat Masriya, DNE, SIS, ONA (Arabic), 5/20/2013]

Prosecutor puts Hamdeen Sabbahi’s daughter on travel ban list
Egypt’s general prosecutor has decided to put the daughter of former presidential candidate and opposition leader Hamdeen Sabbahi on a travel ban list.  Salma Sabbahi, who has been accused of internet marketing fraud, was released on EGP 30,000 bail last week, but arrested again when more legal complaints against her arrived. Sabbahi has pleaded not guilty to all the charges filed against her, accusing singer Hatem Fahmy of conning her husband and she in a pyramid scheme. [Aswat Masriya, ONA (Arabic), 5/20/2013]

Al-Sunni case postponed to June 18
North Cairo Court in Abbasiya has postponed the trial of Mohamed Ibrahim Abdel Moneim, commonly known as Mohamed al-Sunni, to 18 June in order to summon relevant witnesses. The court also ordered on Monday that he remain in detention. Al-Sunni, a police officer at al-Zawya al-Hamra police station, was sentenced to 10 years in a maximum security prison for killing a protester during the January 25 revolution. He later appealed the sentence and a court ordered his retrial. [DNE, 5/20/2013]

Inflation up, deficit down for Egypt in 2014: IMF
The consumer price inflation is projected to reach 10.9 percent by the end of the 2013 fiscal year and climb to 11.6 percent in 2014 as the Egyptian government implements subsidy cuts, according to International Monetary Fund’s Regional Economic Outlook Update for the Middle East and Central Asia.  "Inflation is expected to rise in Egypt, Jordan, Morocco, and Tunisia, reflecting recent and planned subsidy cuts and, in some cases, pressure from monetization of fiscal deficits and supply shortages," states the report, released on Tuesday. The IMF predicts that Egypt’s budget deficit will shrink to 8.7 percent in 2014, after hitting 11.3 percent of GDP in 2013. [Ahram Online, 5/21/2013]

Egypt tourist arrivals rise, not back to pre-revolt levels
The number of tourists visiting Egypt rose in the first four months of 2012, the cabinet said on Tuesday, but analysts say the sector is still suffering from the aftermath of the country’s 2011 uprising. The number of travelers visiting Egypt in the first four months of 2013 rose 11.8 percent from a year earlier, after falling by a third in the year after the uprising. A full recovery would not be likely until at least 2014 and would depend partly on an improvement in the perception among foreigners of Egypt as a safe place to visit, Mohamed Abu Basha, an economist at investment bank EFG-Hermes said. [Reuters, 5/21/2013]

Military operation in Sinai is political – army source
A former army commander has described the decision to launch a military operation in Sinai as "political", explaining that the decision was made by the army in response to the inaction of the authorities.  In an interview on a satellite channel on Monday evening, Tayseer al-Tobgy accused President Mohamed Morsi’s Muslim Brotherhood of attempting to set the army up for war with civilians. Major-General Ahmed Wasfy, commander of Egypt’s Second Army later arrived in al-Arish city in northern Sinai with a delegation of military leaders amid speculation over the use of force to rescue seven Egyptian soldiers. A military source said security troops have not yet received any order on launching an armed operation. Troops have begun searching a number of desert villages in the Sinai Peninsula, however, in the hunt for the abducted soldiers. According to an eyewitness, it is the first time since the January 25 Revolution that police and intelligence work has taken place in the remote desert areas of North Sinai. Clashes erupted Monday between police and citizens in al-Tur, the capital of South Sinai governorate, after a protest against the region’s deteriorating security situation. [Aswat Masriya, Ahram Online, SIS, Shorouk (Arabic), Ahram (Arabic), AMAY (Arabic), 5/21/2013]

Egypt’s Al-Ouga border crossing with Israel reopened to commercial traffic
Egypt’s al-Ouga border crossing with Israel has been opened to commercial traffic after having been temporarily blocked by striking security personnel, according to an official source cited by al-Ahram’s Arabic-language news website on Monday. Shorouk reported, however, that the Rafah crossing remains closed for the fifth consecutive day in protest over inaction of the abduction of soldiers in Sinai. [Ahram Online, Shorouk (Arabic), 5/21/2013]

Rebel movement says lawsuits show Brotherhood fear
Tamarod, a rebellion campaign whose aim is to collect 15 million signatures on a petition against President Mohamed Morsi, said on Tuesday that the lawsuits against it show that the Muslim Brotherhood fears it.  Egypt’s chief prosecutor has ordered the state security prosecution to begin an investigation in a lawsuit that accuses a satellite channel, some journalists and three Tamarod founders of encouraging the public to revolt against the elected regime. [Aswat Masriya, 5/21/2013]

‘Short-term solutions’ no answer to Sinai crisis: Egypt rights groups
A handful of Egyptian human rights organizations warned Egypt’s presidency on Monday against employing "short-term security solutions" to secure the release of seven Egyptian soldiers kidnapped last Thursday in the Sinai Peninsula. "The solution to the longstanding crisis in Sinai begins with ending the political and economic marginalization of the people of Sinai," read a Monday joint statement released by eight Egyptian rights groups, including the Egyptian Initiative for Personal Rights, the Egyptian Centre for Economic and Social Rights, the Cairo Institute for Human Rights Studies, the Nadeem Centre for the Rehabilitation of Victims of Violence and Torture, the Hisham Mubarak Legal Rights Centre, the Egyptian Organization for Human Rights, the Association of Freedom of Thought and Expression, and the ACT Centre for Development and Communication. [Ahram Online, Aswat Masriya, 5/20/2013]

Children face investigation by State Security prosecution
Investigations under the State Security prosecution represent a continuation of policies applied under the former regime, said the Egyptian Coalition on Children’s Rights (ECCR). One of the detained minors, Abdel Rahman Abdel Wadoud, was taken from his house as police “overturned” the house looking for evidence, said his father Mohamed Abdel Wadoud. Abdel Wadoud and six other minors were arrested on charges of being associated with the Black Bloc group, and have been detained for 32 days pending investigations. [DNE, 5/20/2013]

US urges Egypt gov’t to defend political speech
The Obama administration is calling on the Egyptian government to rein in prosecutions of political expression amid what it called a "growing trend" of efforts to punish and deter people from speaking their mind. Ahead of a planned meeting this week between Secretary of State John Kerry and Egypt’s president, the State Department said Monday that it was "deeply concerned" by the rising number of cases against journalists, bloggers and activists who have been detained. The Department says these cases violate Egypt’s international obligations to protect free speech and are steps backward in Egypt’s democratic transition. Meanwhile, Human Rights Watch published an article Monday saying there is a “disconnect between the public’s passionate demonstrations for freedom and their commitment to the legislative and institutional reforms needed to protect their rights against future abuses.” [Ahram Online, Reuters, Egypt Independent, Press Briefing, DNE, Shorouk (Arabic), 5/21/2013]