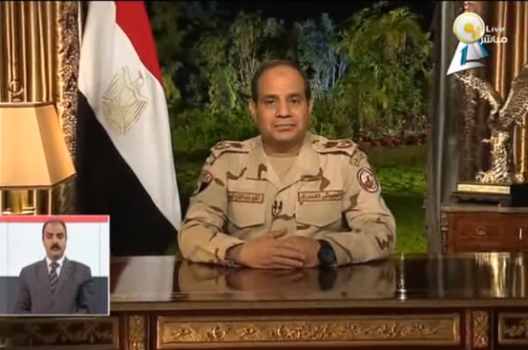 On March 26, Field Marshal Abdel Fattah al-Sisi announced his resignation from the military and as minister of defense, in order to run in Egypt’s upcoming presidential elections. To run, Sisi had to resign before March 30, when registry for presidential candidates is expected to begin, so he can be included in the voter database. In Egypt, the constitution forbids both members of the military and police force from voting.

Watch the speech in Arabic below:

Today, I stand before you in my military uniform for the last time after I have decided to end my service as the Minister of Defense…. I have spent my entire life as a soldier in the service of the nation and in the service of its hopes and aspirations and I will continue to do so God willing.

This is a very significant moment for me. The first time I wore the military uniform was in 1970 as 15-year cadet in the Air Force High School, almost forty-five years ago. And I will always be proud of wearing the uniform in defense of the nation and today I leave this uniform in order to defend the nation.

These recent years of the nation’s history have conclusively shown that no one can become president of Egypt without the will and support of the people. Never can anyone force Egyptians to vote for a president they do not want. [These days have come to an end.] Therefore, I am here before you humbly stating my intention to run for the presidency of the Arab Republic of Egypt…. Only your support will grant me this great honor.

I appear before you to speak from the heart, [as we are accustomed] to say to you that I am representing the appeals a wide spectrum of the Egyptian people demanding that I run for this honorable office…. I will always consider myself a soldier charged with serving the nation in any capacity ordered by the Egyptian people1, [I will be there].

From the first moment which I stand before you, I want to be as truthful with you and with my country as I have always been with myself.

We, Egyptians, have an extremely difficult task and a costly mission. The economic, social, political and security realities [in Egypt]- whether before January 25th Revolution 2011 or the accumulations afterwards until June 30th Revolution 2013- have reached the limit that requires an honest and brave confrontation of challenges.

We must be honest to ourselves. Our country is facing monumental challenges while our economy is weak.  Millions of our youths are suffering from unemployment, [there is no work for them in Egypt] this is not acceptable.

Millions of Egyptians are suffering from illness and cannot find a[n appropriate] cure. This is also unacceptable.

Egypt is [a country] rich with its resources and people, yet it relies on donations and assistance. This is not acceptable either.

[Egyptians deserve a better life than this.] They deserve to a lead a life of dignity, security and freedom. They deserve [the right to find] work, food, education, medical treatment, and [affordable] homes. [All of this must be easily available to all Egyptians.]

We, [all] Egyptians, face tough challenges:
– The rebuilding of state systems which are suffering from feebleness preventing them from rising to its challenges. This is an issue that requires firm handling so that these systems can recover, unify and be in tune.
– [The wheel of] Production has to resume in all sectors, [with all of its power], to save our country from real dangers [it is passing through].
– The State needs to regain its [image and] prestige that was injured during this past period.

Our mission is to [restore and] rebuild Egypt.

What [we have] witnessed in recent years, [whether] in politics or the media, internally or externally has caused the nation at times to be violated . It is time for this disrespect and intrusion to stop. This is a dignified and respected country, and everyone needs to know that this is a decisive moment, that disrespecting Egypt’s right is a gamble which comes with consequences [and reckoning]. Egypt is not a playground for any internal, regional or international party and it never will be. [We do not interfere in others affairs, and do not allow for others to interfere in our affairs.]

I believe that the realization of the future roadmap which strong and patriotic forces formulated in a decisive moment in the history of this nation has been [the] immediate task [before us]. On this path, God has ensured us success in drafting the constitution and here we are, taking our second step toward presidential elections and then legislative elections [God willing].

[I want to assure] my [intention to run] should not deny others their right and duty to run if they see themselves competent to undertake the responsibility. I will be pleased that whoever wins will be someone chosen by the people, and will have the confidence of the voters.

I call upon the partners of this nation to realize that we all – the sons and daughters [the people/the sons] of Egypt- are in the same boat, navigating to [the shore of] deliverance/safety, with no [personal] score-settling or temporary disputes to pursue. We need our motherland [nation] for all its children with no alienation, exclusion or discrimination. Our arms are open to everybody, in Egypt or abroad, declaring that any Egyptian not convicted [English transcript read indicted] by the law, that we all abide by, is an active partner in making the future with no limits or restraints.

Despite all the hardships that the country is going through, I stand before you without the slightest feeling of despair or doubt. I stand rather with an absolute faith in God and in your strong will to change Egypt to the better and usher it [your country] to its rightful place among advanced nations.

It was your will that made the change. It was not the politicians or the military that removed two regimes. It is you, the people. [The will of the people is what succeeded in this.]

The greatness of the Egyptian will, [we know it and have witnessed it] have been evidently witnessed. However, we need to recognize that we are destined to do all in our power to overcome future difficulties. The making of the future is a joint effort. [Repeated] It is a contract between the ruler and the people. The ruler is responsible [for his role, and iscommitted to it] before God and [his] people for his part [with all honesty, dedication, honor and patriotism]. [But] the people also have a commitment to work hard and show patience. A ruler cannot succeed alone … it takes the joint effort of both the ruler and the people [to work together] to succeed.

The Egyptian people know that big victories can be attained, for they have achieved that before. Yet, our will and desire to achieve victory must be coupled with hard work.

The abilities and talents possessed by the Egyptian people for seven thousand years have to ally with hard work.

It is the hard, sincere, and patriotic work that creates successful countries, [advanced countries]. Every Egyptian able to work will be required to exert real efforts and I will be the first to spare no pains for a future Egypt [deserves]. This is the time to rally for the sake of our country, [for the sake of Egypt.]

With complete openness and under the circumstances that you all know [and understand], I am not going to launch a traditional presidential campaign. However, it is your right to [know] my vision for the future, [my vision for the future as I see it]. This will be in an [electoral] platform and [clear vision] that seeks [and aims for] a modern and democratic Egypt once the High Electoral Commission allows for that. Yet, if you may, I will do so with no extravagance, neither in words, funds or traditional practices, [as I see that] this is not appropriate for the current circumstances.

We are threatened by terrorists… by parties who seek the destruction of our life, safety and security. It is true this is my last day in uniform but I will fight every day for [an] Egypt free of fear and terror… not only Egypt, but the whole region God willing. I repeat what I have said before “We’d rather die before Egyptians are terrorized.”

I cannot make miracles. Rather, I propose hard work, and self-denial with no limits. If I am granted the honor of the leadership, I promise that we together, leadership and people, can achieve stability, safety and hope for Egypt with God’s permission.

1 Army transcript read: “And I will always remain in the service of this country in any capacity desired by Egyptians.”