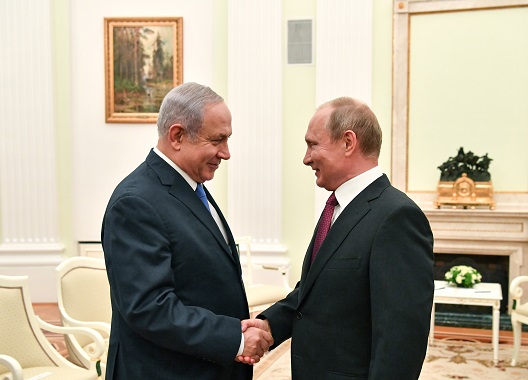 Iran and its role in Syria are likely to be the main agenda item at the June 24-26 trilateral meeting of the US, Russian, and Israeli national security advisers in Israel. What US National Security Adviser John Bolton and his Israeli counterpart, Meir Ben-Shabbat, want from Russia is clear: Moscow’s in reducing or even eliminating the Iranian presence in Syria. Russian National Security Adviser Nikolai Patrushev, though, is unlikely to meet their demands on this score.

Russia’s attitude really should come as no surprise. Indeed, what is surprising is that the US and Israeli leaders actually think that they can change Russia’s plans. Even if Moscow were willing to contemplate this idea, Putin is expected to want something in return. He is likely to demand the acceptance of the Assad regime by the United States, Israel, and Washington’s Western and Middle Eastern allies. He might also demand US recognition of Russia’s annexation of Crimea and an end to US-backed sanctions against Russia over Ukraine and other issues. It is highly doubtful, though, that the Trump Administration would agree to any such terms, or that Congress would support it doing so. But if the United States is unwilling to make any concessions to Moscow, Russian leaders will wonder how it is the American and Israeli leaders can expect the Kremlin to make any concessions to them on Iran.

There are those in Washington and Jerusalem who appear to believe that they need not make any concessions to Moscow. They believe that it is in Russia’s interest to push Iran out of Syria anyway. Russia and Iran have basically succeeded in eliminating the threat of the Assad regime being overthrown by its internal opponents. However, differences have emerged between Moscow and Tehran over which will have greater influence in Damascus with lucrative reconstruction contracts. Some unconfirmed reports mentioned clashes between Iranian and Chechen forces in the Russian military police.

Despite the differences between Moscow and Tehran, Russian officials are well aware that they cannot afford to see Iranian forces leave Syria. As a recent report by Ambassador Michel Duclos, a nonresident senior fellow at the Atlantic Council indicates, Russian officials are well aware that Iran and its allies have a much larger presence in Syria than Russia does. The withdrawal of these forces could seriously undermine the Assad regime, and Moscow does not want the burden of propping up Assad by itself. And while Washington and Jerusalem may think Russia can engineer the departure of Iran and its allies from Syria, that may not be true. Moscow may be the only party that understands this would be easier said than done, even if it were to try.

Whether Patrushev will be frank about this to Bolton and Ben-Shabbat is unclear. He is, though, likely to respond to their demands with the following arguments:

1) While the US and Israeli governments object to the Iranian presence in Syria, Iran’s presence there serves to suppress Sunni jihadist forces whose strength could quickly rebound if it were gone. Because the Sunni jihadists are the common enemy of all (the US, Israel, Russia, and Iran), the Iranian presence in Syria actually serves US and Israeli interests.

2) While Moscow and Tehran share the goal of defending the Assad regime, Moscow does not share the anti-Israeli goals that Iran and its Shia militia allies are also pursuing. It is unreasonable, though, for the US and Israel to expect Russia to act against Iran and its Shia militia allies at their behest when this would only undermine the Assad regime to the detriment of all. What Russia can do, though, is continue its current policy of not blocking Israel from targeting Iranian and Hezbollah positions when their actions threaten the Jewish state—provided Israel abides by Moscow’s “red line” of not harming Russian military personnel or installations.

3) While Moscow is confident that Israel is well able to protect itself from any threat that Iran and Hezbollah pose to its interests in Syria, a tit-for-tat conflict between Israeli and Iranian/Hezbollah forces is destabilizing and could get out of hand. Moscow, though, can help mitigate this risk though by mediating between Iran on the one hand and Israel (either with or without the US) on the other. Such a process can help Israel and Iran reach a modus vivendi in Syria that will allow them to coexist without unduly threatening each other.

It is highly doubtful, of course, that the US and Israel would accept any Russian offer to mediate with Iran. And even if they did, it is doubtful that any such offer would succeed. Just by making it, though, Moscow may hope to appear to be more reasonable than the US and Israel demanding that Russia somehow remove Iran from Syria. And Moscow may calculate that Iranian-Israeli skirmishes will continue to escalate, but the Trump Administration does not really want to fight with Iran despite its intensified anti-Iranian rhetoric. The US, Israel, and Iran are likely to end up turning to Moscow for mediation, thus eventually making them all reliant on Russia anyway.

Mark N. Katz is Professor of Government and Politics at the George Mason University Schar School of Policy and Government, and Nonresident Senior Fellow at the Atlantic Council.