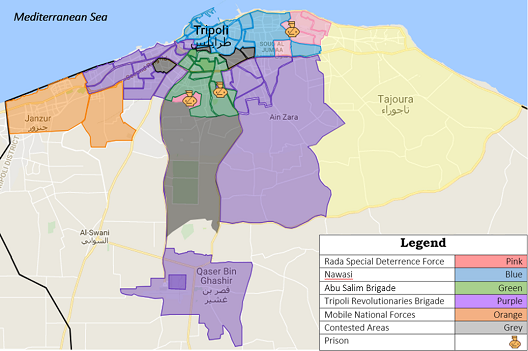 In the wake of Libya’s 2011 revolution, militias built a powerful role for themselves by filling the security vacuum left by the overthrow of strongman Muammar Qaddhafi. Armed groups emerged in all corners of Libya, but the complexity and prevalence is especially noticed in and around the capital, Tripoli.

Money, status, and authority strengthened the militias, as well as a decision early in the transition to expand almost eight-fold the number of men on the payroll of the security apparatus. Yet, the power armed groups wield today is a result of their adaptability to the chaos and ability to navigate factions and manipulate public institutions, or lack thereof.

The Government of National Accord (GNA)—Libya’s interim UN-back government formed at the end of 2015—arrived in Tripoli in March 2016. It did not have an established security apparatus, and so operated out of a naval base until it negotiated the allegiance of any armed groups willing to take its side. Major-General Abdulrahman Taweel headed the Temporary Security Committee during the arrival of the GNA, which was tasked by the UN with protecting the naval base. Once it was safe, the GNA migrated to its headquarters in Suq al Jum’aa, in the north of the city. This established a precarious balance of power: from the time of the establishment of the internationally recognized government, militias wielded more power over the inhabitants of western Libya so long as they guaranteed the safety of the GNA’s headquarters.

While the makeup of the coalition of armed forces in Tripoli has changed over time and hundreds of militias, four main players are consistently dominant: the Rada Special Deterrence Force (SDF), the Nawasi Brigade, the Abu Salim Brigade, and the Tripoli Revolutionaries Brigade (TRB).

Today, the four main armed groups function as a police force, an intelligence gathering body, and, at times, as fighting forces. They make arrests, conduct raids to prevent terrorism and criminal activity, and fend off attacks from extremist militias in the area. The population has grown to rely on the militias for these services to keep the city safe. Ongoing attacks likely help the militias’ position in the city because it justifies their existence; a low level of violence allows the militias to prove that the security they provide is needed.

The militias have also gained prestige that has contributed to their recruiting capabilities. Some militias have grown in strength due to recruiting and the acclamation of profits from the illicit economy. The UN indicates that Tripoli’s security situation has improved in the last eighteen months, however some experts argue that the improved security is only an illusion.

In addition to providing security for residents and government buildings, Tripoli militias also control the city’s only functioning airport, prisons, immigrant detention centers, and other major infrastructure mainly for cash flow reasons. They also engage in oil smuggling, human trafficking, and drug trade. This engagement in the illicit economy heightened their power by allowing them to operate as a security organization and criminal network.

Militias nominally aligned to the GNA
Over the past two years—since the GNA’s arrival to Tripoli—these four militias have acquired unprecedented influence over public and private institutions and established extensive criminal and embezzlement networks.

Of the four main players, the Rada Special Deterrence Force (SDF) by and large is the most influential and powerful militia in Tripoli. Before 2011, Abdulraouf Kara was a metalsmith working in Tripoli. Since the toppling of Qaddhafi, Kara has been on the ground at every turn of Libya’s transition, quickly assuming a leadership role in the SDF and known for his strict interpretation of Madkhali Salafism.

In theory, the SDF—officially part of the GNA’s Ministry of Interior—takes orders from the central government. In practice, the armed group operates with a great deal of autonomy. The SDF claims only a small patch of territory in northeast Tripoli, but its operations and influence span all of Tripoli and its duties are wide in scope. The SDF organizes narcotics and alcohol raids, fights crime, and patrols neighborhoods throughout Tripoli. The SDF’s leverage also stems from its control of Tripoli’s only functioning airport, Maitiga airport. In other words, it controls who enters and exits the country. In recent years, the powerful brigade shifted its efforts to dismantling ISIS cells and arresting sympathizers, which requires at times using tactics more akin to an intelligence force. It houses them in a makeshift prison at the airport. The SDF currently detains 2,600 individuals, including 300 to 500 men affiliated with ISIS and other terrorist organizations, former Guantanamo Bay detainees, as well as the brother of the Libyan Manchester bomber who killed twenty-two people in 2017.

The SDF does not operate without hindrances, however. In the past year, Maitiga airport shut down for a few hours on four occasions (June, July October, and February) due to fighting, and for five days in January when clashes between armed groups killed twenty people. A UN report lists the SDF’s abuses in its prisons, which include torture, arbitrary and unlawful detentions, unlawful executions, and neglect. The leader Abdelraouf Kara insists he runs a humane facility where rehabilitation is the goal.

The Nawasi Brigade is an Islamist group that previously supported the GNC. Nawasi was one of the largest militias subsumed into the Libyan Ministry of Interior’s Supreme Security Committee (SSC) of the dormant GNC parliament—at the time, the rival to the internationally recognized government in Tobruk.

The SSC functioned as the police. Nawasi was responsible for many anti-crime operations and had a ruthless reputation for punishing crimes related to alcohol, drugs, homosexuality, and unaccompanied females, according to journalist Jamie Dettmer, who landed a rare interview with Abdulraouf Kara in 2015 when Nawasi used to be under his command. In addition to strictly following Islamic rules on gender and substances, Nawasi is known to be explosive and reactionary as they react violently even to minor disputes.

Nawasi was one of the first brigades to align with the GNA and assured the unity government’s protection. It protects Abu Sitta naval base where Prime Minister Fayez al Sarraj resides and vocally supports the LPA. However, it has been known to clash with other forces under the GNA umbrella, as well as take positions contrary to the SDF. In November 2017, Nawasi provided permission for a comic convention that the SDF shut down.

Abu Salim Brigade is led by Abdul Ghani al Kikkli. The group is sometimes known by the name ‘Ghneiwa’. The militia is nominally aligned with GNA and was crucial in the expulsion of pro-GNA militias from the capital. Abu Salim Brigade also considers itself a crime fighting force, conducting drug and alcohol raids throughout its controlled territory.

The Tripoli Revolutionaries Brigade is one of the largest militias in Tripoli in terms of personnel and military capabilities, yet has lost considerable influence in the capital as the SDF increasingly become more influential in many parts of the city. Led by Haithem Tajouri, the TRB is primarily based out of the Suq al Jum’aa neighborhood, while maintaining a heavy presence in Gargarish. Both areas are valuable because they lie next to the only functioning airport in Tripoli controlled by the SDF. The organization is nominally aligned to the Ministry of Interior.

Militias nominally aligned to the GNC
Libya Dawn was a coalition of armed groups aligned to the GNC parliament elected in 2012 that had ties to tribes, the Muslim Brotherhood, anti-Qaddhafi revolutionaries from Misrata, and militias from Tripoli. The Libya Dawn bloc took over Tripoli in August 2014 and controlled the city until mid-2016. After the arrival of the UN-backed unity government, some militias pledged loyalty to the unity government and some remained loyal to the defunct parliament as well as extremist individuals/groups.

The GNC officially disbanded in 2016, and militias tied to the GNC were gradually pushed out of Tripoli after the March arrival of the UN-backed unity government. The forces announced in May 2017 their withdrawal from Tripoli to prevent more damage to the city after years of clashes.

Although the GNC signed the Libyan Political Agreement (LPA), which created the unity government, the GNC did not have the consensus of all the militias in their coalition. Leading up to and after the signing of the LPA in December 2015, existing fractions within the GNC’s Libyan Dawn coalition deepened. Today, the militias that remain loyal to the GNC operate on the outskirts of Tripoli.

Bugra and Kani Brigade
Present on the eastern outskirts of Tripoli.

Al Bugra and Kani are among the extremist leaning forces still loyal to the dormant GNC parliament and who were pushed out by GNA-aligned forces. The two militias have presence in separate but neighboring regions outside Tripoli and do not coordinate strategies or attacks.

The 33rd Infantry Brigade, also known as al Bugra—the nickname of the leader meaning ‘the cow’—is led by Bashir Khalfallah. Al Bugra previously held strongholds in Tripoli and now operates from the eastern suburb of Tajoura. Al Bugra attempted and failed to penetrate the Maitiga aiport in an effort to free some detainees in the prison.

Today, Kani runs operations out of Tarhouna and has frequent activity in Garabulli, 35 miles east of Tripoli. Kani controlled some territory and key infrastructure prior to May 2017 when the threats from the Tripoli Revolutionaries’ Brigade caused its departure. The Kani Brigade recently became officially aligned with the GNA, however the brigade is known to have extremist leanings and violent tendencies.

Mobile National Forces
Controls the orange areas on the coast in western Tripoli.

The Mobile National Forces previously had strongholds in Al Seyaheyya and Ghout al Shaal, but were pushed westward into the Janzour and Serraj neighborhoods. Most of its members are Amazigh, originally from parts of the western Nafusa mountains. The group remains loyal to remnants of the Government of National Salvation—a government affiliated with the GNC that disbanded in 2016 but seeks to reestablish itself in Tripoli.

Yousuf Eltagouri is an intern at the Rafik Hariri Center at the Atlantic Council. Follow him on Twitter: @yousufeltagouri.

Erin Neale is a research assistant at the Rafik Hariri Center at the Atlantic Council. Follow her on Twitter: @erinaneale.