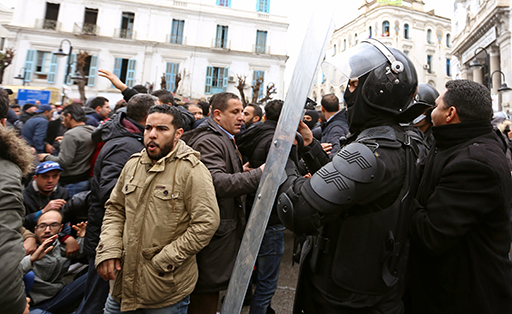 The riots that have occurred in many Tunisian cities and villages at the beginning of 2018 have caught by surprise many experts and observers of Tunisia’s political and socio-economic evolution. Tunisia has been presented to the world as the only success story in the framework of the so-called Arab Spring. Unfortunately, judging it as a success is premature and ignores the country’s situation and the depth of its problems.

The protests, initially peaceful, were brewing beneath the dire economic situation of large parts of the country and erupted after the recent austerity measures. The principal motivator of the revolts today, therefore, mirrors that of 2011: the state of the economy. In 2011, there was at least enthusiasm and hope that a new political system could improve living conditions. The same hope is absent from today’s protests. Contrary to 2011, desperation and nihilism play a leading role in the 2018 protests. From this point of view, the situation is even more dangerous than seven years ago.

The government has operated since the 2014 presidential elections in a way that draws doubts on its real intentions and even flirts with the return to practices of censorship and repression held under the old regime. Arbitrary arrests and torture are on the rise despite the attention of human rights groups. The government tries to contain terrorism through an increasingly repressive apparatus that has conducted thousands of arrests since 2015, many without much explanation and respect for the rule of law. The political climate is becoming bleaker, and, as a consequence of this, the emigration—both legal and illegal—of Tunisians toward Europe has increased tenfold. The temptation for parts of the elite to return to a more authoritarian system is very much present.

The economy has also lagged far behind 2011 expectations and promises. Terrorism has deterred tourism, an industry that directly accounts for 6% of employment in Tunisia. Many Tunisians in the southern and central regions turn to the illicit economy to sustain a livelihood, such as smuggling oil from Libya. When oil flows slowed in the fall of 2017 due to stricter militia control around the usual Libyan smuggling routes, more Tunisians embarked on the dangerous journey to Europe within five weeks than in 2015 and 2016 combined. Additionally, Tunisia has faced crippling inflation as well as a growing deficit.

On top of the grievances over unemployment and the budget crisis, life itself has become more expensive for all Tunisians. The government’s economic reforms stripped subsidies and increased taxes on basic services such as phone calls, internet access, and retirement plans. As a result, prices of staple goods such as tea, fuel, flour, and produce all rose. Cutting public sector employment is also part of the long-term economic goals, which is an unpopular measure since many work for the government. These announced but unpopular economic reforms are prompting a mass reaction geared entirely against the direction the authorities are trying to take the country. Tunisians are demanding job opportunities, infrastructure, public investment, and—most notably—for the 2018 reforms to be retracted.

The political elite in Tunisia are adding insult to injury: while the population is struggling to survive in a fruitless economy, corruption is rampant within the government. Tunisians are not blind to the fact that bribes, favoritism, and nepotism still run the police, tax administration, and many public sectors. Eighty nine percent of Tunisians sense that corruption is worse than before the revolution and reported it as the third largest economic issue in the country, according to a 2017 survey conducted by the International Republican Institute (IRI).

However, it is essential to remark on the perilous waters Prime Minister Yousef Chahid must navigate. On the one hand, he must accommodate the demands of the international institutions by applying a policy of reforms and subsidy reductions, while undertaking demands from citizens to expand the economy, create jobs, and rebuild much needed public infrastructure. The Tunisia government is in a simple but agonizing Catch-22.

The headless and spontaneous outburst on the ground can evolve into a politically organized and structured revolutionary force if the questions posed by the demonstrators are not rapidly addressed. However, so far there is no sign of a leadership developing. The passage from peaceful to armed protests could be in the cards. This constitutes a very strong incentive for the authorities to revamp the economy with the adoption of wider and more comprehensive actions.

The government’s emergency response over the weekend bought time. Without repealing any of the 2018 budget reforms, the government announced it will increase services to the unemployed and poor. Undoubtedly, such services will be useful to Tunisians, but the task of healing larger wounds remains.

However, the Tunisian government risks reacting too heavily in one direction. The government may react in a way that increases repression, thus reverting to former authoritarian ways, or it can give into the protests and water down the reforms, making international donors unhappy and prompting the cycle to repeat. It will be considered a success if the political class has the will and savvy to hear the protesters and address their demands without giving up on the reform process entirely.

This is not to say that Tunisia has not had any success. The country today is much better than in 2011 on a few dimensions. Reform of the political institutions, beginning with the drafting of a modern and illuminated constitution, a better and more efficient Parliament, regular and ordinate holding of elections, as well as an improvement in institutions’ relationship with the public can all be categorized as milestones in Tunisian political reform. The progress is undeniable and uplifting, but a more important question naturally follows: will it be sustained?

Rapidly addressing the demands is only the first step of the solution. The continued and sustained movements away from corruption and authoritative practices are more important than immediately quieting the revolts. The government of Prime Minister Chahid is performing a balancing act between international and domestic pressures, an act that could cause the country to return to its past. We must remain optimistic but not naïve to history repeating itself.

Erin Neale is an intern at the Rafik Hariri Center