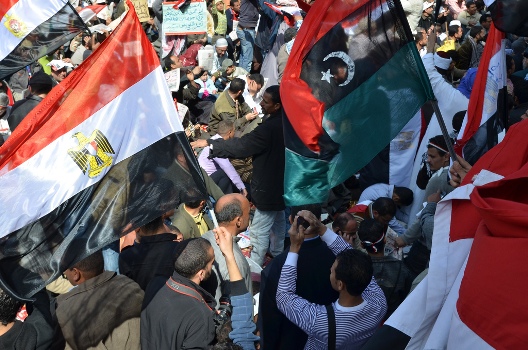 Since its founding, the Rafik Hariri Center for the Middle East has closely followed the Arab transitioning countries as they faced their respective social, political, and economic challenges. In an effort to help map the twists and turns, the Center has produced a timeline for Tunisia, Egypt, Libya, and Yemen as each had to navigate momentous and jarring changes to the fabric of their societies.

On December 17, 2010, Mohamed Bouazizi set himself on fire in protest of the humiliation he suffered at the hands of Zine El Abidine Ben Ali’s state, sparking the largest popular protests in Tunisia. The protests that rocked the small North African nation, quickly spilled over into its neighboring countries. On January 25, 2011, hundreds of thousands of Egyptians took the street calling for the ouster of thirty-year dictator, Hosni Mubarak. Two days later, on January 27, 2011, Yemen followed suit, with protests erupting in the capital Sana’a, President Ali Abdullah Saleh’s thirty-three-year regime. On February 15, 2011, Libya witnessed its first protests in Benghazi.

While each uprising successfully removed the country’s leader, each under its own unique set of circumstances, this is where most similarities end. The momentous changes unfolding in each nation have been wrought with political, economic, and social challenges. In Tunisia, the democratic transition has been set back by assassinations, and a stalled constitutional process. In Egypt, the country’s first civilian president was ousted after just one year in power, as the nation rushes towards ratifying its second constitution in two years. In Libya, the security vacuum left in the wake of the NATO-led intervention and the proliferation of weapons have together contributed to Libyan militias taking control of regions of the country. And finally in Yemen, a stalled national dialogue process has made little progess over the past year.

To view an interactive timeline with the most significant milestones in each country’s transition, click here.