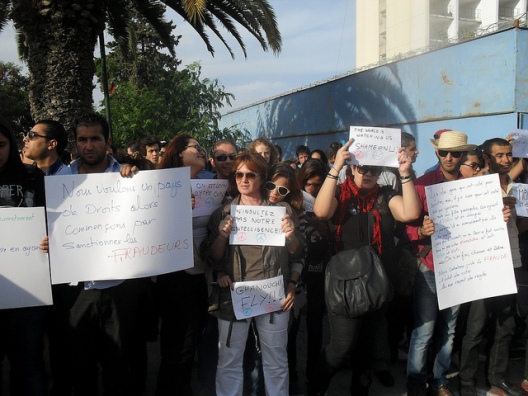 With the raging war in Syria, the ouster of the first democratically elected president in Egypt, and unstable political paralysis in Libya, Tunisia’s democratic transition seems to be the last hope of the Arab spring in the region. Serious challenges are facing the country’s transitional process. The assassination of Mohamed Brahmi, member of the National Constituent Assembly (NCA), on July 25 and the murder of eight soldiers in Mount Chaambi in August ignited accusations that Ennahda was at best ambivalent to the growing insecurity. Protests increased against the Islamist ruling party, which dominates the executive branch and the NCA. Days later, nearly a third of the NCA members boycotted further sessions and supported the opposition parties’ call for the resignation of Ennahda-led government officials and the dissolution of the NCA.

The opposition has argued that the insecurity, incompetence, and bad governance demonstrates the failure of political Islam in Tunisia as in Egypt. It has blamed Ennahda for its tolerance of extremist Salafi movements, its failure to stabilize the economy, and its inability to respect the constitution draft deadline of October 23, 2012. Ennahda, on the other hand, has countered criticisms of the NCA and the ruling government, claiming a mandate backed by electoral legitimacy since Ennahda swept elections in October 2011.

Since early August, NCA President Mustapha ben Jaafar decided to suspend the sessions, interrupting the drafting of the new constitution, until the political deadlock ended. The general labor union (UGTT), the largest and most influential union in Tunisia, subsequently intervened by inviting the different parties for a dialogue, based on its proposal for a technocratic caretaker government and the resumption of the NCA’s activities.

The coalition government (otherwise known as the Troika), composed of Ennahda and two secular parties, announced its readiness to resign, on the condition of guarantees, including: the approval of a clear road map toward completing the constitution, creating the Independent High Authority for Elections, approving an electoral law, and conducting free elections. Nonetheless, the opposition has considered this position a rejection of the dialogue, insisting on the immediate resignation of the government.

Despite concessions from both sides of the political divide and their acceptance of the UGTT proposal, no official agreement has yet been announced. The overarching reason behind this delay lies in the lack of confidence between the secular opposition and Islamists in power. “There is a confidence crisis; they tell us: you refuse to leave the government, and we answer them: we fear that you will take the power from us and never quit it,” said Rached El Ghannouchi, president of Ennahda, on September 7.

The secular opposition clearly fears Islamist domination of the state’s institutions and undue influence over upcoming elections. Ennahda worries that leaving the government too quickly could prelude total political failure. After years of persecution under Zine El Abidine Ben Ali, Ennahda feels that it risks political exclusion and persecution if it leaves the government without adequate guarantees.

Faced with what it understands to be an existential contest, Ennahda’s goal now is to buy time, to stay in power as long as possible to maximize its chances in the upcoming elections. With this strategy in mind, Prime Minister Ali Larayedh argues that the serious security challenges facing the country cannot be surmounted by an inexperienced technocratic government and insists the Troika should continue its war against terrorism, and avoid the risk of a power vacuum.

Despite the challenges to its leadership, Ennahda appears able to maintain its advantageous position. It has avoided the same fate of the Muslim Brotherhood in Egypt (thus far), and resisted both opposition and media pressure to release its grip on power. Three primary factors explaining its ability to preserve the current arrangement include: First, the Tunisian army is a neutral and apolitical institution, so the risk of military coup is very low. Traditionally, the Tunisian armed forces have respected civilian leadership, and with President Moncef Marzouki as head of the military—whose party is in a coalition with Ennahda—the government does not have to fear the likelihood of a military coup.

Second, Ennahda has demonstrated its ability to avoid conflict and calm tensions through political flexibility. It accepted opposition demands for the new constitution not to stipulate sharia as the source of Tunisian law. It also agreed to reinforce woman rights. Its alliance with two secular parties has masked its domination of state institutions. Lately, it also took serious measures against armed Salafist groups, and declared Ansar al-Sharia a terrorist organization, mitigating suspicions with regards to its relationship with extremists.

Third, the opposition parties have not played a convincing role. Resorting to harsh rhetoric to criticize Islamists—often based on rumors—instead of offering their own political vision, these parties fail to provide a viable alternative to lead the transition. Nidaa Tounes, the largest opposition party, relies on supporters of the old regime whom ordinary Tunisians still distrust, whilst other parties lack any significant popularity.

Although it remains unclear how and when this crisis will end, Ennahda’s chances appear to favor its continued leadership so long as it can respond to the demands of the people. Without popular support, opposition parties can ride a wave of discontent to hasten Ennahda’s departure. If its detractors can manipulate the UGTT’s power to mobilize mass demonstrations, or flex its muscle through general strikes, it would no doubt quicken the Troika resignation. However, Ennahda political future is highly linked to stability and its success to put an end to political assassination and terrorist attacks. Ultimately, it lies to ordinary Tunisian citizens which path they will choose.