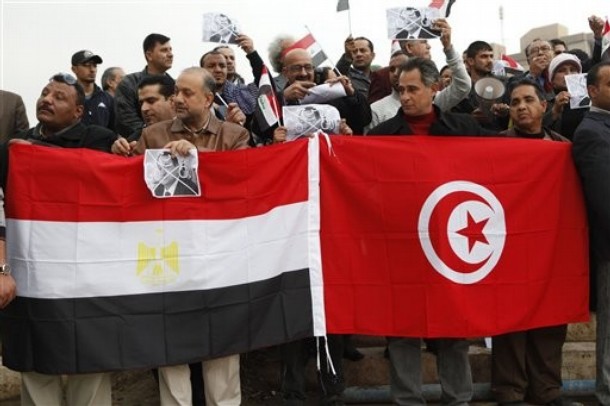 As Tunisia reels from the implications of the assassination of Tunisian opposition leader Chokri Belaid, once again events in the small Maghreb country are reverberating further east in Egypt. A video of the ultra-conservative cleric, Mahmoud Sha’aban posted on YouTube days before the assassination has since gone viral, leading to nationwide condemnation from all sides of the political spectrum. In the video, Sha’aban condoned the killing of opposition figures, specifically calling out Mohamed ElBaradei and Hamdeen Sabahy. He justified his stance claiming that they had publicly called for the ousting of the elected president, Mohamed Morsi, in their own bid for the leadership role in Egypt.

Sha’aban’s statements, which he now claims were distorted by the media, were largely ignored until news of the assassination in Tunisia broke, and governmental and Islamist PR machines went into overdrive. The Muslim Brotherhood denounced Sha’aban’s statements and Prime Minister Hesham Qandil promised to take legal action against those who incite violence. Centrist and far-right politicians also spoke out against Sha’aban’s provocations, among them Strong Egypt party leader Abdel Moneim Abul Futouh and Salafi Nour Party spokesman Nader Bakkar.

The security sector sprung into action, with police deployed to protect the homes of both ElBaradei and Sabbahy, while the Ministry of Interior issued a statement announcing their plan to secure Egypt’s prominent political figures, in the wake Belaid’s assassination.

In a turbulent two-year transitional period in Egypt, the nation has not witnessed any political assassinations nor assassination attempts. In stark contrast, Libya has witnessed countless attacks, both attempted and successful, while Tunisia is struggling to contain the crisis resulting from its first assassination. So what makes Egypt different?

The fallout from the Tunisian assassination has been significant. Tunisian Prime Minister Hamadi Jebali dissolved the government, a move met with stiff opposition, and protests have led to attacks on leading party Ennahda’s headquarters in several towns.

Egypt itself has faced similar elements of instability, both under the military-led transition, and under elected president, Mohamed Morsi. Court verdicts, police brutality, sexual harassment, and worker strikes have been more than enough to bring Egyptians to the streets in great numbers. Egypt’s counterparts to groups in Tunisia and Libya who have undertaken assassinations may not want to risk a political assassination destabilizing a government, one that is already under fire.

On the other hand, rights groups continue to allege that journalists and activists are the real target instead. The Tahrir Doctors Association head, Mohamed Fetouh, claims that the death of activist Mohamed al-Qorany (better known as Kristy) was the result of premeditated murder. Several prominent activists have been killed in the midst of violent crackdowns on protests in Cairo, leading many to believe their deaths have been no coincidence. Some also believe that journalist al-Hosseiny Abu-Deif’s death in the midst of violent clashes at the presidential palace last December was the result of a targeted attack, while, Youssef al-Husseiny, ONTV anchor and outspoken critic of the Muslim Brotherhood and President Morsi, went into hiding for several days after threats were made on his life.

Attacking activists and journalists may be an indication of where the real power lies. While the main opposition bloc, the National Salvation Front (NSF) struggles to find consensus within its own ranks, the real threat to Morsi’s government is not in a group of politicians who cannot see eye to eye. The real threat is, instead, in a street movement angered by two years of a complete lack of accountability and continued violence on the part of an unreformed security sector, and a media that continues to speak out despite repeated clampdowns. The possible targeting of prominent activists and journalists can be seen as an attempt to employ scare tactics to quell dissent and street protests, the same kind of which accelerated the demise of Hosni Mubarak’s government.