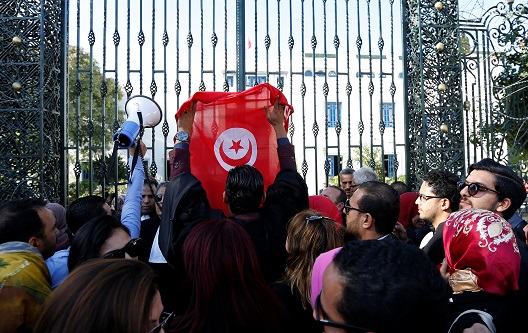 Tunisia’s transition to democracy is in a difficult spot: the public is frustrated with the political and economic situation, but the political elite are shying away from needed public engagement. Two recent events stand out: the 2018 draft budget law put forward this month and the recent postponement of the local elections to next year. By postponing the elections, Tunisian politicians forwent an opportunity to engage the citizenry at a time when that dialogue will be critical—as the government begins to implement economic reforms that are expected to grow its economy, changes will also bring layoffs and tax hikes to a population already largely dissatisfied with its government’s performance.

Tunisia’s Finance Ministry put forward a draft 2018 budget law this month that suggests the government will initiate several difficult economic reforms. In an effort to cut the budget deficit, Tunisia plans to raise taxes, including the value-added tax which will be applied to a wider set of goods and services, and cut the public wage bill by voluntarily laying off approximately thousands of public sector workers next year.

Tunisia is under pressure from the International Monetary Fund (IMF) to speed up economic reforms. In 2016, the IMF and Tunisia reached a $2.6 billion extended fund facility (EFF) to support economic and financial reforms aimed at achieving inclusive growth and macroeconomic stability. Earlier this year, Tunisia accelerated its reform program after the IMF delayed the release of a tranche of the loan to Tunisia. The IMF has been pushing Tunis to stabilize its public finances, and in a statement following a visit in the country this month, it called on the government to take “indispensable” efforts to better manage the public-sector wage bill, which is among the highest in the world.

Economic reforms have moved slowly in Tunisia since the 2011 revolution. Successive governments have focused on the country’s political transition and have been wary of tackling unpopular reforms in the constrained economic environment, caused in part by persistent security threats. Yet the government cannot push off needed economic reforms, such as public sector layoffs, indefinitely. Moreover, slow movement on reforms has not been met with any increases in public support. On the contrary, public approval of the government, and political parties in general, is dismal.

A recent poll conducted by the International Republican Institute (IRI) revealed approval ratings for President Caid Essebsi and Prime Minister Youssef Chahed have averaged below 20 percent in 2017. Meanwhile, 89 percent of Tunisians believe corruption in Tunisia is worse now than it was prior to 2011—and the majority believe none of the political parties are best-suited to fight it. When asked who individuals would vote for if local elections were held tomorrow, no more than 3 percent of respondents expressed support for any of the parties, including Essebsi’s ruling party Nidaa Tounes. The poll also reveals that Tunisians recognize a need for economic change. Nearly 90 percent of Tunisians believe the economic situation in Tunisia is bad. However, only 10 percent of Tunisians believe Nidaa Tounes is best suited to help grow the Tunisian economy.

Planned economic reforms come amid political strife in Tunisia, demonstrated by a controversial cabinet reshuffle by Prime Minister Chahed in September. The reshuffle appointed allies of Nidaa Tounes to six of the thirteen shuffled positions and sidelined its coalition partner Ennahda. The Islamist party, which has a majority of seats in parliament, kept its three cabinet seats but only gained one additional seat. Shortly following this power play, Nidaa Tounes announced the postponement of municipal elections—a likely indicator that the ruling party is concerned about a poor performance ahead of the presidential and legislative elections in 2019.

Amid sustained public frustration over the country’s economic woes and dissatisfaction with its political leaders, this postponement imperils Tunisia’s fragile democratic transition process. The third and latest postponement of Tunisia’s municipal elections, to a tentative date of March 25, 2018, pushed the vote to eighteen months after its originally scheduled date. Meanwhile, the repeated postponements, as well as high-profile resignations, have damaged the credibility of Tunisia’s Independent High Authority for Elections (ISIE). Most prominently, head of ISIE Chafik Sarsar resigned from his post in May, openly questioning the impartiality and transparency of the electoral body, and political tensions have impeded the election of a new ISIE president.

The only objective justification of the postponement is that Tunisia lacks a clear legal framework for the functioning of municipal councils. Despite numerous revisions, the parliament has not yet ratified a draft Code on Local Authorities that outlines the responsibilities of local councils, their structures, and their role in Tunisia’s political system and that would give councils increased financial independence. However, Nidaa Tounes may be inclined to further delay elections, given the negative impact that planned economic reforms may have on public opinion.

Rather, the government should use the 2018 municipal elections as an opportunity to engage with the public as these difficult economic reforms are undertaken. While the ruling political party may be wary of performing poorly ahead of national elections, such engagement, and efforts to renew confidence in the government, becomes only more critical as the 2019 polls approach. Further, public opinion may worsen further if it does not proceed with promised municipal elections.

The IRI poll, moreover, demonstrates that Tunisians want the government to do something about the economic challenges. Nearly half of Tunisians believe unemployment is the biggest economic problem facing their country. While an immediate consequence of the planned reforms will be public sector layoffs, the IMF recommendations guiding these reforms aim to boost job growth. The reforms will likely be unpopular; however, the Tunisian government cannot further postpone the opportunity municipal elections provide to engage in dialogue about the country’s economic challenges, any more than it can indefinitely postpone reforms that address these challenges.

While one in three Tunisians still consider public sector jobs their preferred type of employment, a slightly larger percentage of Tunisians aspire to be self-employed small business owners. With public debt at sixty-three percent of gross domestic product (GDP) in 2016, the government should foster the entrepreneurial spirit already widespread among the Tunisian population as it seeks to remedy the bloated public sector. The majority of Tunisians also believe an economic system in which the private sector plays the leading role, with government oversight, is best for their country. Municipal elections are an opportunity for the government to make the case for follow-on economic reforms that will move Tunisia toward a stable and growing economy.

Amid the current challenging economic environment in Tunisia, recent polling demonstrates that Tunisians want more from their government. In the long term, economic reforms that are unpopular now may produce positive dividends in the future. But the government must also listen to Tunisians’ needs as it embarks on these reforms. Municipal elections would provide citizens with a new reality in which they can engage with and seek to impact the political system at the local level. Although such a reality is many elections cycles away, with nationwide elections in 2019 approaching, 2018 municipal elections may at least remind Tunisia’s citizenry that they do in fact have a voice in the direction of their country.