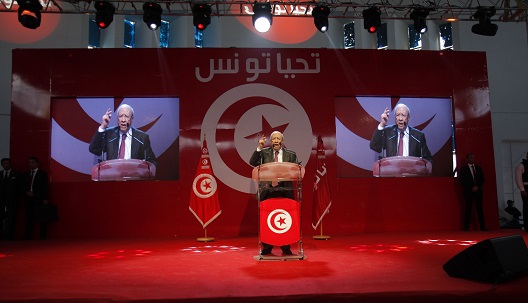 The post-legislative elections political landscape in Tunisia has presented voters with a dichotomy between secularist party Nidaa Tounes (which had won a plurality with 85 seats in parliament) and the Islamist Ennahda party (69 seats). The two dominant parties in Tunisian politics have focused their efforts on controlling the formation of new government and the presidential elections. Ennahda, fielding no candidates for the presidency, will try to exert its influence in the legislative realm. Nidaa Tounes, on the other hand, will attempt to win control over both the executive and legislative branches—and stands the greatest chance at succeeding. These two political titans will face off this weekend, as Tunisians will once again choose between conflicting ideologies.

Ennahda’s initial plan involved throwing its support behind an independent candidate to defeat Beji Caid Essebsi, Nidaa Tounes’ founder and party leader. A challenger would prevent Nidaa Tounes from dominating the government. But Ennahda’s Shura Council decided on November 7 that it would not officially endorse any one particular candidate in an effort to reduce tensions with Nidaa Tounes. The move hoped to promote the possibility of joining forces in a ruling coalition in the future.

Many Tunisians, in fact, are uncomfortable with an Essebsi win. Such a result would allow him, as president, to choose a member of his own party to form and lead the next government. Without a majority in parliament, Nidaa Tounes would still need a coalition but would most certainly dominate the decision making dynamic. This outcome could potentially mean one-party control over the parliament, the government, and the presidency. Among the twenty-five candidates, only Moncef Marzouki, the current interim-president, seems able to compete with Essebsi. Marzouki has already received a great deal of support from Ennahda members, even without an official endorsement, in large part due to his ties to the party.

The highly partisan environment will limit Tunisians’ choices for president to only two candidates: Essebsi and Marzouki, the representatives of the main opposing ideologies.

Beji Caid Essebsi, the source of Nidaa Tounes’ strength with his experience and charisma, was the prime minister of the first transitional government after the uprising. But his participation in previous non-democratic regimes, as a former minister to Habib Bourguiba (first president of the republic of Tunisia) and president of the parliament under Ben Ali regime, tainted his stature. Now he stands accused of colluding with former members of the former Ben Ali party (Democratic Constitutional Rally) in Nidaa. However, Essebsi appears to have recovered, declaring his support for democracy and founding Nidaa Tounes in 2011 as a counterbalance to Tunisia’s Islamists and their allies.

Moncef Marzouki was one of the most prominent opponents of Ben Ali. He founded the Congress for the Republic party in 2001. Thanks to his alliance with Ennahda in the Troika coalition, the National Constituent Assembly selected him as interim-President of the Republic in 2012. Marzouki was criticized for his foreign policy, primarily his decision to cancel diplomatic relationships with Syria and his vocal condemnation of Egypt’s coup orchestrated by then-defense minister and current president Abdel Fattah al-Sisi. He favored Turkish and Qatari relations, going against a long history of neutrality that promoted good relations with all countries. Domestically, Tunisians accused Marzouki of favoring conservative and Islamist parties and providing political cover for violent groups claiming to protect the revolution against forces of the old regime. However, Marzouki is still seen by many Tunisians as human rights activist and the last bulwark against dictatorship. Many remain skeptical of Marzouki, but they would vote for him in rejection of Essebsi.

The presidential elections as such appear rooted in a rivalry between two ideologies or two political cultures (their social and economic programs are almost identical). Voters fall on either side of the fault line: political Islam or the classic one-party model based on a strong and charismatic leader. But the legislative elections drew voters of all backgrounds—those who disliked Islamists and aimed to marginalize Ennahda for the next five years were attracted to Nidaa Tounes; those who were dissatisfied with Ennahda’s performance in government voted for Nidaa Tounes as to sanction the party. The question now is whether Nidaa can ride the momentum of dissatisfaction in the presidential elections to achieve an Essebsi win.

Should Marzouki win the elections, it would prohibit Nidaa Tounes’ dominance, but could also lead to gridlock between the president and the other institutions led by Nidaa (the government and the parliament). Despite the checks and balances in the new constitution that regulate the relationship between these institutions, conflicting political forces would quickly grind the government to a halt.

Both Essebsi and Marzouki will likely clear the first-round hurdle—few other candidates can hope to be in the second round. Other potential challengers include The Free Patriotic Union’s Slim Riahi and leftist party Popular Front’s Hamma Hammami. Neither of them, however, maintains the level of support that Essebsi and Marzouki enjoy.

The real success of the two rounds of presidential elections will depend on turnout. Only one third of voting age population participated in the legislative elections, raising questions of representation and legitimacy. Observers also noticed that youth participation in the elections was very low, while many elder voters flocked to the polls. Engaging the public is essential in fostering the consent of the governed. No matter who wins the election, the new president would do well to remember that they work for Tunisia and the Tunisian people.