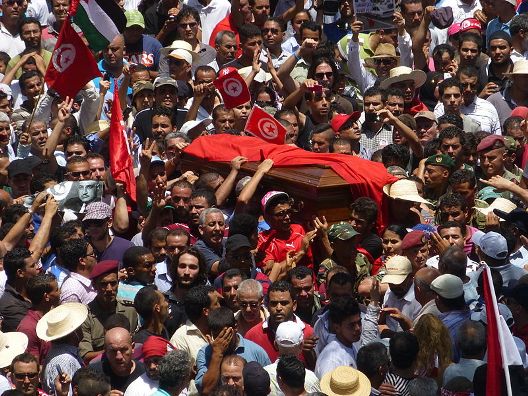 Tunisia’s democratic transition has been facing numerous obstacles such as a failing economy and the lack of a transitional justice system, but security has been its main impediment. Since late 2012, Tunisia has faced the greatest security challenge in its modern history, punctuated by political assassinations, terror plots, and an open war between the military and terrorist groups in Mount Chaambi along the border with Algeria. Civil society organizations, political opposition leaders, and police unions have called for action to address the alarming security situation and terrorist training camps, but the Ennahda-led government rejected and downplayed those calls until recently.

The assassination of constituent assembly (CA) member Mohamed Brahmi on July 25, followed by the suspension of more than seventy assembly members’ participation in the assembly and leading a nationwide movement demanding the dissolution of the current government and the CA, triggered a new government position towards extreme religious groups and particularly Ansar al-Sharia in Tunisia (AST); a position still questioned by civil society organizations and opposing politicians.

As a response to the criticism surrounding his conduct in Tunisia’s war on terror Prime Minister Ali Larayedh issued a statement on Tuesday claiming “hard proof” of AST’s responsibility for the latest political assassinations and the Mount Chaambi attacks. The interior ministry subsequently held a press conference to clarify the executive decision classifying AST as a terrorist group.

We are presenting compelling and consistent facts resulted from confessions and investigations and not from conclusions and crossings, as some claimed.
– Interior minister spokesperson at the August 28 press conference

The hour-long conference highlighted AST and deconstructed its organogram, listing the names and biographies of its members. The interior ministry also revealed that the AST kill-list was composed mainly of prominent and outspoken politicians and journalists known for their fierce criticism to the government and Ennahda- except for the prime minister’s brother. Former al-Qaeda fighter in Afghanistan, Ansar Saif Allah bin Hussein (a.k.a. Abu Iyadh), created al-Sharia in Tunisia in April 2011. Its ideology originates from the infamous seventh century Kharijites’ citation “No rule but God’s,” suggesting the fundamental belief that the government is not a representative of God. Ansar al-Sharia’s principles are part of the bigger Salafist-jihadist movement.

We have proof that Ansar al-Sharia has ties with al-Qaeda in the Islamic Maghreb and so does the Okba Ibn Nefaa militant group.
– Minister of Interior Lotfi Ben Jeddou, August 28.

In contrast, the group initially portrayed a starkly different image to Tunisians at its founding. AST members cleaned up and secured communities, organized charity events, and helped victims of natural disasters in places like Aid Draham after the snow storm in February 2012. Although the exact numbers of its membership remain unclear, government officials downplay the group’s strength, approximating roughly ten thousand AST adherents (AST argues it has over one hundred thousand followers). It is also one of the few groups that offered marginalized youth a sense of belonging and a political voice that they could not find elsewhere.

Only few months after its creation, however, AST adopted a more aggressive strategy, making political statements through various forms of protest across the country. Some of these actions—such as climbing the capital’s clock tower to raise al-Qaeda’s black flag—raised alarm in many Western countries and even made it to New York Times’ front page. Others, such as burning bars and threatening bar owners with similar treatment if they continue selling alcohol, flew under the media radar.

Prior to the US embassy attack on September 14, 2012, the Islamist government never condemned AST, at least not publicly. It persistently supported them, as evident by Ennahdha leaders’ speeches during AST public gatherings. The Islamist-led government also consistently denied of the existence of terrorist training camps despite the foreign media reports on the subject. Now, months after the US embassy attack, two political assassinations, an open war in Mount Chaambi, the Ennahdha-led government finally decided to classify AST as a terrorist organization and reveals information that had remained secret to date. Yet, interior ministry’s evidence was wrought with inconsistencies.

The official release from the Tunisian interior ministry accused a seventeen year-old female of heading a jihad nikah (holy prostitution) cell. It also placed prominent blogger Lina Ben Mhenni and her brother Faouzi on the AST target list, only to find out later that she has no brother with that name. Three of the listed AST members—Maher Akari, Adel Kefi, and Abdallah Ben Aziza, presented as terrorists during the conference—were set free by the public prosecutor without explanation. The interior ministry claimed that all its information is based on confessions, but such confessions carry little weight due to the notorious use of torture used on detainees in Tunisia. It also denounced the public prosecutor’s decision setting the three AST members free.

Prime Minister Larayedh has clearly declared war on AST, but his party leaders have not unanimously endorsed the decision. A glaring example includes Noureddine Bhiri, a prominent Ennahda leader controlling the justice ministry, who is accused of orchestrating the repeated release of arrested terrorist suspects—including those who took part in the embassy attack. The move triggered a wave of national and international criticism—particularly from the United States.

Prime Minister Larayedh, in going on the offensive against AST, is trying to overcome criticism of his record on extremism and divert public attention from calls to bring down his government. Many in the opposition expected him to announce his resignation, but by keeping the focus on his fight against terrorism he continues to buy himself more time. Despite the rhetoric, the government’s actions so far still appear cosmetic.

Ultimately, Larayedh and Ennahda walk a fine line between managing contentious political interests (both domestically and internationally), maintaining security, and retaining political control. As these vying constraints increasingly diverge, however, the Tunisian government will be forced to make a difficult choice: openly support the Islamists against more secular parties to exercise some degree of authority over their activities, or crackdown on extremists and potentially face a limited insurgency. Any choice in between will likely leave Ennahda fighting on all fronts with no allies at all.

Bassem Bouguerra is a Tunisian activist, commentator, and the president of the Tunisian Institutional Reform, a non-profit organization currently focused on security sector reform.

Image: A state funeral was held for Brahmi and tens of thousands of people attended the procession to the Jellaz Cemetery in Tunis. (Photo: Wikimedia/Citizen59/CC license)