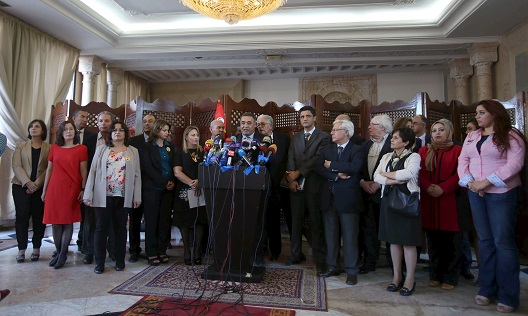 Dissenting members of the Tunisian parliament of Nidaa Tounes party gather during a news conference in Tunis, Tunisia November 9, 2015. (Reuters)

On November 9, a group of thirty-one Tunisian parliamentarians from the ruling Nidaa Tounes party resigned from their parliamentary bloc and warned that they will resign from the party. They called on the party leaders to hold an executive committee meeting to “pave the way for dialogue” surrounding the party’s leadership structure. Although the MPs have since suspended their resignations, the move signals a leadership crisis within Nidaa Tounes that has been developing for over a year.

As others have pointed out, the split within Nidaa Tounes is complex, involving disputes over leadership and underlying ideological divisions. One faction is composed of supporters of President Beji Caid Essebsi’s son, Hafedh Caid Essebsi. Many of Hafedh’s supporters are members of Tunisia’s defunct political party of former Presidents Habib Bourguiba and Zine Ben Abidine Ben Ali, the Constitutional Democratic Rally (French: RCD). The competing faction is composed of leftists led by Nidaa Tounes Secretary General Mohsen Marzouk. Marzouk served as President Beji Caid Essebsi’s campaign manager during the landmark 2014 presidential election and is viewed by many as a contender in the next presidential election. The resigning members support Marzouk and protest what they call the “non-democratic way in which the party has been managed.” On November 1, a party meeting in Hammamet devolved into violence between the two factions, with Marzouk supporters accusing Hafedh of trying to usurp leadership of the party.

Divisions within Nidaa Tounes are not new. Zeineb Marzouk wrote in Tunisia Live that the “rivalries underlying [the November 1] violence have long been simmering within the party and have become an open secret amongst party members, journalists, and political observers within Tunis.”

Nidaa was formed in 2012 by Beji Caid Essebsi as a counterweight to the then-ruling Ennahda Party. Essebsi mobilized a diverse group of Tunisians from across the political spectrum with different political agendas and played a crucial role as the party’s uniting figure. He included leftists, businessmen, labor unionists, and former members of the RCD. Essebsi resigned as the head of Nidaa after he won the presidency in December 2014, leaving a leadership vacuum that triggered the internal conflict, according to Atlantic Council Nonresident Fellow Bassem Bouguerra.

Divisions emerged in late January and early February as Prime Minister Habib Essid formed his cabinet over the role of Ennahda in the new government. Nidaa, which won eighty-six seats in the 2014 parliamentary elections, was forced to form a coalition government. Left-wing members and their allies wanted Nidaa Tounes to eschew an alliance with Ennahda and instead ally with the Free Patriotic Union, the Popular Front, and independents. In their view, a coalition government that included Ennahda betrayed Tunisian voters who saw Nidaa as an alternative to Ennahda. But ex-RCD Nidaa members recognized that excluding Ennahda meant the figurative dismissal of one-third of Tunisian voters. They emphasized the elevation of national unity over Nidaa’s own narrow interests. Ultimately, the old guard won the debate.

In early March 2015, conflict resurfaced when former party spokesman Lazher Akremi announced that Hafedh Caid Essebsi, Assembly of People’s Representatives (ARP) President Mohamed Ennaceur, and Nidaa Tounes parliamentary bloc president Fadhel Omran would all be excluded from the Constituent Committee on the grounds that founders of the party cannot legally be part of that body. The campaign to remove the three members from the Constituent Committee, although unsuccessful, was not the first attempt to limit Hafedh’s influence. In August 2014, prior to the parliamentary elections, Hafedh was announced as head of the legislative list for Tunis 1, reportedly without consulting party members. After accusations of nepotism grew within the party, Hafedh withdrew his name from this list.

Akremi submitted his resignation as Minister of Parliamentary Relations on October 5 in a public move that signaled ongoing discord within the party. In his resignation, he cited frustration over the lack of will within the government to fight corruption and his belief that President Essebsi intended to arrange a hereditary succession. Following Akremi’s resignation, the Executive Bureau held a series of meetings to bring the party back from the “brink of collapse.” Predictions of collapse were not far off. The conflict within Nidaa came to a head on November 4 when thirty-one Nidaa Tounes members loyal to Marzouk suspended their membership in the ruling party and threatened to resign over their grievances with Hafedh and his supporters.

The thirty-one members resigned from the ruling party bloc on November 9. While significant, the ramifications remain unclear. The representatives may simply be using their resignations to pressure the party into meeting a series of demands to reorder the internal power structure. If the remaining bloc members agree to compromise and address their grievances, the resigning members will likely to return. The November 14 decision by the members to suspend their resignations until Nidaa’s executive committee meeting on November 22 could indicate a willingness to negotiate. But if the thirty-one members of parliament decide to split from Nidaa to form their own independent party—an option that they had voiced—there are at least three possible scenarios.

The most radical path the new party could take would be to withdraw from the coalition, which would weaken the ruling bloc. Nidaa Tounes won 86 of the 217 available seats in Tunisia’s parliamentary elections last fall, giving the party a plurality but not a majority. When Nidaa joined with Ennahda (sixty-nine seats), Free Patriotic Union (French: UPL; sixteen seats), and Afek Tounes (eight seats), the coalition grew to a massive 179 members. With the defection of thirty-one Nidaa Tounes members from its bloc, the coalition would retain a majority (148 seats) within the parliament, but Nidaa Tounes would cede its leading role within the parliamentary coalition to Ennahda. The subsequent division and disarray could paralyze the legislative process, further delaying much-needed economic reforms.

Alternatively, this new party could ransom its membership in the ruling coalition for a government reshuffle, which would both demonstrate its opposition to the alleged hereditary plan of the conservative faction within Nidaa Tounes and place its own ministers within the new government. The least disruptive path the new party could take would entail remaining part of the coalition and not ask for a reshuffle in the interest of national unity. In this scenario, the new party would distance itself from the Nidaa Tounes members of the bloc, but maintain an air of patriotism by staying true to its statements reaffirming support for Essid and his government.

A split within Nidaa Tounes would likely hurt public trust in the government, and in Nidaa Tounes in particular. Tunisian voters, who expected Nidaa Tounes to deliver on its campaign platform—improving basic social rights, including education, employment, healthcare, and housing—have not seen the fulfillment of those promises. Rather than focusing on governance, the party has devolved into political infighting, a fact that is unlikely to escape Tunisians in the next elections.

Former technocratic Prime Minister Mehdi Jomaa could take advantage of the split within Nidaa Tounes to form his own political party. Jomaa visited Algeria earlier this month and met with President Abdelaziz Bouteflika. “The [2011] revolution was conducted to give young people more opportunities, but when we look at the situation today, we cannot say it is better than before,” Jomaa said during his visit. Algerian newspaper Al Khabar suggested that the visit was timed to engender Tunisians’ support for Jomaa in light of the country’s current governance crisis. A wave of support could favorably reposition Jomaa within Tunisian politics.

The political wrangling muddles the landscape ahead of the 2016 municipal elections. Nidaa Tounes may have to answer to a jaded constituency in the elections for failing its voters. While the current crisis is unlikely to trigger government collapse, it hampers the party’s ability to serve as a unified countervailing force to Ennahda and underscores the fragile nature of Tunisia’s balance of political power.

Katherine Wolff is a Program Assistant with the Atlantic Council’s Rafik Hariri Center for the Middle East.

Elissa Miller is a Program Assistant with the Atlantic Council’s Rafik Hariri Center for the Middle East.