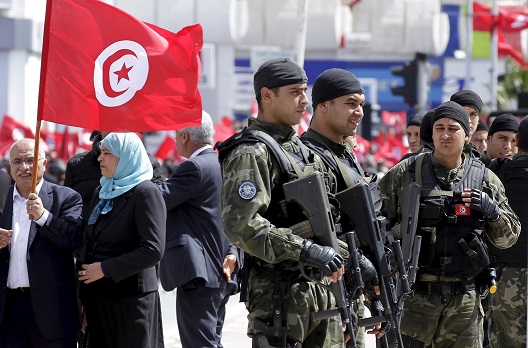 In the wake of the hostage shootout at Bardo Museum in Tunis that left more than twenty dead, US Deputy Secretary of State Antony Blinken recently announced that US military aid to Tunisia would triple to combat “those who threaten the freedom and safety of the nation.” The renewed global focus on countering violent extremism, however, should also draw scrutiny to an opaque security sector that continues to act with impunity. The Bardo attack has pushed the government to press for an investigation, more scrutiny, and civilian oversight of the security forces, but security policy in Tunisia still largely remains in the hands of the interior ministry—a ministry so opaque that even the most basic facts of its make-up are not public. With Tunisia’s political institutions nascent and vulnerable, the state’s future capacity to ensure public safety and security will depend largely on whether its leaders have the political will to take the painful step of reforming its security forces.

There are of course the immediate questions of how prepared Tunisia’s security forces are for hostage situations. The Tunisian government has given no indication that has skilled negotiators or staff with the proper training among its security forces. It is perhaps an admission of the regular security forces’ incompetence that authorities deployed the army to the streets to maintain security (the army is operationally and organizationally separate from other security forces such as the police or the national guard). Security forces are “inexperienced in tackling terrorist threats,” according to the US State Department, and early reporting of the Bardo crisis by the New York Times noted that “the death toll more than doubled” when security forces retook the museum from the hostage-takers. It is telling that the United States has offered training as part of the military aid package.

However, Tunisia’s security forces suffer from more than mere limits to their operational capacities. As a force designed to quash dissent rather than protect citizens, four qualities to this design render their role antithetical to one that would provide security to citizens:

All of these, rather than improving the security forces’ ability to keep the peace, actually foster resentment and put distance between the state and its citizens.

What we do not know can hurt us

Tunisia’s security forces and the interior ministry’s communication team provide nearly all information that is publicly available about violent extremist groups operating in Tunisia. Police regularly announce the killing or capture of “terrorists,” but it is unclear whether some of these terrorists are ever put on trial, or even interrogated by trained professionals for the purposes of intelligence gathering. If the interior ministry knows anything about the motives, funding, organizational structure, or identity of alleged terrorist groups operating in Tunisia, they are not telling much. Most of the other available information comes from social media postings by individuals claiming to represent the groups themselves, such as Ansar Sharia, Uqba bin Nafi brigade, or the more popular brand names like the Islamic State (ISIS or ISIL) or al-Qaeda.

Apart from these sources of information, what do we actually know about these groups in Tunisia? Since 2002 and until the Bardo atrocity, no non-politician civilian had been killed by alleged terrorist groups. We know that two politicians were assassinated since the uprising in 2011, but security forces claimed they killed the assassins last year and provided scant further details. [TR1] We know that there have been numerous killings of security forces, particularly around the Algerian border in Mount Chaambi, near the Tunisian town of Kasserine. However, journalists are not allowed to enter these closed military zones and cannot confirm the details of these events independently.

So far, the Crisis Group carried some of the most extensive independent research into this issue out. In an eerily prescient report published late last year, it found that since the government began its crackdown on Ansar Sharia in summer 2013, Tunisia’s now fragmented jihadist movement poses a “genuine risk of isolated elements pursuing a path of individual violence or rallying the pro-IS current as a result of the near-eradication of Ansar Sharia.” Additionally, it found economic factors, organized crime, and smuggling as the primary drivers of violence between jihadists and security forces around the Algerian border.

These findings challenge the dominant media narrative that suggests the country’s security problems stem from transnational jihadist organizations and ideology. This is not to deny that transnational jihadist organizations have any links within Tunisia, or that ideology is not a factor, but merely that there is not enough public information to prove these links definitively. Moreover, it suggests that when independent research actually does succeed in overcoming institutional barriers to information (like closed military zones), it will discover facts that are very different to those that the security forces closely guard, sparingly release, and subsequently spread into the media stream via official quotes and press conferences.

A new war on terror?

In the wake of the tragic Bardo attack, there has been an outpouring of support in public statements by Tunisia’s allies. Media outlets have quickly picked up official claims of responsibility for the massacre by different jihadist groups, with claims of ISIS responsibility naturally gaining in prominence. There are calls domestically for the passage of a new terrorism law, while the president has called for a “war with terror” to be carried out “without mercy”. Some demonstrators have attacked the concept of human rights.

This confluence of support for a new war on terror resembles the atmosphere that preempted former dictator Zine El Abidine Ben Ali’s policy turn after 9/11 and the 2002 deadly attack on a synagogue in Djerba. Tunisia’s policy then was in line with that of other US allies who joined a “global war on terror”. As one journalist recently noted:

The resulting crackdown did bring stability, security aid from the U.S., and, eventually, a return of European tourists. But out of the sight of those tourists, in the basement of the Interior Ministry and in police stations and prisons across the country, individuals arrested under the law were systematically tortured.

This state policy may have been able to produce a semblance of security at a time before the uprisings and the emergence of new citizens, before the wide penetration of social media and the explosion of the new Arab public sphere, before the state’s collapse in neighboring Libya, and before the proliferation of regional and global jihadist groups. However, the patterns of violence have changed since then; public consciousness has changed; regional politics have changed; state institutions have begun to change. The security of Tunisia’s people and those who visit its beautiful shores is dependent on security sector reform, and in turn, a redefinition of the state.

Fadil Aliriza is a journalist and analyst who was based in Tunis for several years after the uprising; he is currently a pursuing a master’s degree in Middle East politics at SOAS, University of London. Follow him on twitter @FadilAliriza
North Africa

Image: Members of Tunisian security forces stand guard as Tunisians wave their national flag during a march against extremism outside Tunis' Bardo Museum on March 29, 2015. (Reuters)