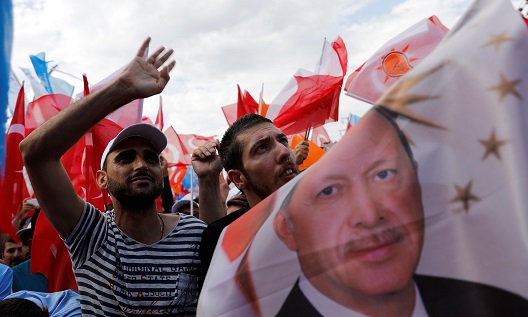 After sixteen years in power, Turkey’s Justice and Development Party (AKP) is facing a serious challenge from an allied opposition in the run-up to the June 24 national election. In a first, Turkish voters will head to the polls that Sunday to vote on candidates for parliament and the presidency. The election is the first up-or-down vote for the AKP’s leader and current Turkish president, Recep Tayyip Erdogan, following a national referendum last April. In the referendum, voters narrowly passed a series of changes to the constitution to transform the Turkish political system from a parliamentary model to a highly centralized presidential system of governance.

In the run-up to the election, Erdogan and his political ally, the far-right nationalist Nationalist Movement Party (MHP) surprised voters, after they agreed to move the date of the election up from November 2019 to June 2018. In addition, the two parties worked together to change Turkish electoral law to allow parties to run as a coalition, albeit while still allowing each parties’ logo to remain on the ballot. The coalition vote will be determined from the total number of votes cast for each party. The impetus for this change stems from a moment of political weakness when the AKP lost its parliamentary majority in June 2015, and from a prolonged failure to lower the ten percent threshold for parties to enter parliament. The AKP managed to regain its majority in November, but during those interim months the AKP adopted a more right wing nationalist platform, intended to expand its appeal with far right voters associated with the MHP.

The electoral changes, in retrospect, signal AKP discomfort and political weakness. On the one hand, the AKP managed to win a very narrow majority for changes to the Turkish constitution, and to create a viable pathway for Erdogan to take greater control over all elements of the state. However, in doing so, Erdogan now has to win greater than 50 percent of the vote, or otherwise face a run-off (scheduled for July 8) with the second place finisher. The AKP has never won more than 50 percent of the vote; surpassing this margin in only three referendums. To get over the hump, the AKP and the MHP entered into a formal alliance, dubbed the People’s alliance (Cumhur Ittifaki).

The AKP appears to assume that Turkey’s opposition parties, long feckless and ideologically divided, would fail to unite and run on a common platform. The AKP’s assumptions made sense up until now: The main opposition party, the Republican People’s Party (CHP) is infernally divided, between reformists that would like to push the party towards a more liberal platform and older party members, wedded to a nationalist narrative linked to principles Turkey’s founder, Mustafa Kemal Ataturk. The IYI Party is an MHP spin-off, whose founding in 2017 stemmed from a spilt in the MHP. The Peoples’ Democratic Party (HDP) is Kurdish-dominated, and linked closely to the now failed peace process. Finally, the Felicity Party (Saadet), is religiously conservative and the party that the AKP split from in the late 1990s.

These four divergent parties, however, have come together and coalesced messaging around as simple message: A vote for Erdogan is a vote for autocracy; vote for democracy. The CHP, IYI, and Saadet are in a formal coalition, dubbed the National Alliance (Millet Ittifaki). The HDP was not included in overt coalition talks, but its political success is vital for the formal coalition’s two-pronged strategy. The first prong is focused on the presidency and is aimed at forcing Erdogan below the 50 percent mark, in order to force a run-off on July 8. To do so, each party has put forward a candidate, with the CHP’s Muharrem Ince and IYI’s Meral Aksener competing for ‘second place.’ This approach is designed to ensure that each party’s base turns out to maximize the votes cast and to give the coalition the greatest chance to drive Erdogan under 50 percent on the first ballot. To date, polls suggest that Ince is the more popular of the two, and is well positioned to win more than 20 percent of the votes cast. In this scenario, the National Alliance would then coalesce around the second place finisher (whether Ince or Aksener) and then campaign together to oust Erdogan.

The second prong is focused on parliament, and turning out votes for each National Alliance member and the HDP. This prong is completely dependent on the HDP surpassing the 10 percent threshold to enter parliament. Thus, even though the HDP is not an official member of the National Alliance, it is in de facto partnership with the bloc. The AKP is the second most popular party in Turkey’s Kurdish-majority southeast, and thus could get an artificial boost should the HDP fall below 10 percent. If this happens, the People’s alliance would easily win a majority in parliament, and drive the National Alliance into opposition at the presidential and parliamentary level.

Despite the results of the April 2017 referendum, alongside the general centralizing trend in Turkish domestic politics, the parliament (at least on paper) remains important. In theory, parliament retains the capability to overturn a presidential decree. To do so, a simple majority is needed (301 votes). The parliament also, in theory, can alter the budget the president submits — and could therefore refuse to fund projects/policies the president favors or proposes. The parliament also has the final say over the declaration of war. Moreover, in the updated document, parliament is empowered to choose a seven of the thirteen judges appointed to Turkey’s Council of Judges and Prosecutors HSK). The president selects the other six members. The HSK controls the judiciary, the tool with which the AKP has carried out various efforts to purge the bureaucracy of real and perceived enemies to its rule. If the National Alliance takes control of parliament, it could block rule by decree, and grind governance to a halt. Thus, while most of the focus is on whether Erdogan can be beaten as president, the four opposition parties are best positioned to take control over parliament, and to prevent Erdogan from exercising total control over governance.

However, other scenarios must also be considered: Erdogan could be beaten in a second round of the presidential vote, with the HDP falling below 10 percent, giving the AKP-MHP control over parliament. Finally, there is a very slim chance the National Alliance gets a majority in parliament and Ince or Aksener beat Erdogan in a run-off. The most likely outcome, as of today, is an Erdogan victory and a contested parliament. Finally, the AKP and HDP presidential candidates could underperform in the southeast and Ince could over perform, perhaps because voters choose to split their votes between the anti-Erdogan candidate that promises concessions in a future peace process, while also doing their best to ensure cross the threshold.

To date, the campaign has neither been free, nor fair. The AKP dominates Turkish television, with Erdogan rallies broadcast in their entirety. IYI has been unofficially blacklisted from major television networks. The HDP’s presidential candidate, Selahattin Demirtas, is incarcerated and unable to speak to news outlets from his prison cell. The CHP is allotted some airtime, but it is a small fraction of the time given to the AKP. Finally, in the southeast, ballot boxes have been moved from HDP leaning districts to AKP centric areas, ostensibly over security concerns. However, the move has been widely interpreted as an effort to suppress HDP voter turn-out, in order to drive the party below the threshold.

And yet, the AKP-MHP alliance is facing a serious challenge with a number of plausible scenarios, ending either in Erdogan’s total dominance or his spectacular fall from power. The MHP is a dying party and its geriatric leader, Devlet Bahceli, is content with Erdogan channeling his party’s ideas as his own. However, the AKP’s assumption that the MHP’s base would help propel the People’s alliance to victory seems short sighted. The MHP’s base is shrinking and the party is not pushing the AKP far beyond the 50 percent marker nationally.

Erdogan, meanwhile, is out campaigning, but the party’s narrative is a rehash of themes that many voters have been exposed to over the past sixteen years. The opposition has succeeded in setting the agenda, but Erdogan remains Turkey’s most popular politician, and has vast resources to turn-out his base. Turkey’s election remains up for grabs and the opposition, after sixteen years, is pursuing a coherent and sound strategy to wrestle back control over one, or both, of the countries’ power centers.