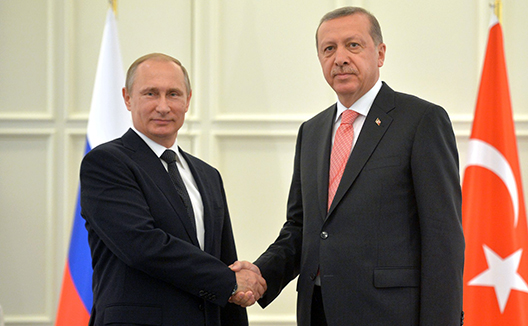 As President Recep Tayyip Erdogan makes his first international visit in the wake of an attempted coup against his government, Turkey’s recent outreach to Russia comes as part of a broader effort to recalibrate Turkish foreign policy, following years of political isolation. The Turkish government’s tensions with Russia increased following the Air Force’s downing of a Russian SU-24 bomber on November 24, 2015. The Russian jet was flying lazy donuts along the border and strayed into Turkish airspace for 17 seconds. The Turkish Air Force and the civilian leadership had, both in private and public, warned Russia that the military would respond to air space violations and that the “rules of engagement” governing the use of military force reflected this warning. The shoot down, it appears, resulted from these aggressive rules of engagement, and prompted Moscow to retaliate with economic sanctions and anti-Turkish propaganda in Kremlin-affiliated news outlets.

The Turkish government worked for months to repair relations, reportedly working with Kazakhstan’s President, Nursultan Nazarbayev, to help resolve the conflict. The timing of the meeting has raised questions about Turkey’s longer-term foreign policy outlook, and whether the Turkish government would consider distancing itself from NATO and its traditional western allies.

The tensions with the west stem from the failed coup attempt and the Turkish government’s subsequent decision to instrumentalize anti-Americanism/Westernism to advance Turkey’s self-defined political interests. On July 15, a faction of the Turkish armed forces attempted to overthrow the ruling Justice and Development Party (AKP) and install martial law. The coup failed, and in its aftermath, the AKP and much of Turkish society blames the United States and  European Union for failing to show solidarity with Turkey. The Turkish government claims that Fetullah Gulen, a Turkish Imam living in self-exile in Pennsylvania, was behind the plot and is demanding that the United States extradite him.

The United States has, in turn, prodded Turkey to present evidence linking Gulen to the plot, in line with legal precedent and the terms of the bilateral extradition treaty with Turkey. To date, Turkey has sent 85 boxes of evidence to the Department of Justice, but has yet to formally apply for extradition. The resulting tension has upset Turkish-American relations, with some Turkish officials warning of unspecified consequences if Gulen is not deported.

Turkey’s rapprochement with Russia has therefore increased concerns in western Europe and Washington that Ankara may take steps to distance itself from its traditional allies. Turkey has an incentive to use the far reaching concerns about President Vladimir Putin in Washington and Brussels to its advantage. Moscow has, traditionally, worked to weaken the NATO alliance by convincing some of its member states to adopt a more neutral approach to Russia. Turkey’s concurrent tensions with the west—and therefore much of NATO—provides Russia with an opportunity to weaken the Alliance.

The AKP has, quietly, always favored maintaining close relations with the West—and Washington, in particular. Yet, the AKP has also instramentalized anti-Americanism/Westernism during times of tension, a tactic that has a poisonous effect on the greater Turkish public’s perception of the United States and western Europe. The danger is that this will force Turkish politicians to continue to play up tensions, or to overlook the numerous areas where the two countries cooperate closely on various issues. Turkey, for example, is totally reliant on NATO for long-range air defense from ballistic and cruise missile attack, and during the most recent tensions with Moscow, privately lobbied for a larger NATO/American presence in the Mediterranean and at Turkish Air Bases for protection.

Turkey’s relationship with Russia is complicated, despite efforts to emphasize shared security and economic interests. The two countries remain divided over Syria, a point of contention that shows few signs of easing. The Turkish government remains the most important backer of various rebel groups in Idlib province and, according to Erika Solomon, was instrumental in the recent operation to break the Russian-backed regime siege of Aleppo. Turkey has funneled considerable support to Ahrar al-Sham (and much of the more nationalist Syrian insurgency). Russia has sought to define all insurgent groups in Syria as Al-Qaeda or Islamic State-linked terrorists to justify its on-going air campaign in support of Bashar al-Assad and his allied military forces—a description at odds with Ankara’s approach to the Syrian conflict.

Turkey is also very concerned about Russian outreach to the Democratic Union Party (PYD), a Kurdish-majority group dominant along much of Syria’s northern border with Turkey. In November 2015, the Russian Air Force heavily bombed Arab-majority insurgent positions near Azaz, which allowed for the PYD’s armed wing, the YPG, to take territory from the Turkish-backed groups. Moscow subsequently pushed for PYD inclusion at peace talks in Geneva, a proposal Ankara vehemently argued against.

These tensions over sub-state actors are a microcosm for a much broader Turkish concern about Syria: the direction of post-Assad Syria. The United States and Russia, outside of their two divergent military operations in Syria, are holding bilateral meetings to decide the fate of Assad and Syria. Turkey is left out of these bilateral discussions, despite being a neighboring state and its genuine security concerns about PYD autonomy in northern Syria. Turkey’s outreach to Russia was, in part, intended to gain a greater say over the future of Syria, including an effort to try and create a regional format for peace negotiations, outside of the US-Russia bilateral track.

On the economic side, Turkey has much to gain from improved relations with Russia, with the Russian sanctions imposed after the November 24 shootdown impacting Turkey’s tourism industry. The numerous security threats in Turkey has depressed this important industry in recent months, forcing the government to take steps to ensure the financial health of Turkish tourism operators/companies. Before the failed coup on July 15, analysts predicted a 35-40 percent drop in income in tourism-related income in 2016, according to a report in Bloomberg. The return of Russian charter flights could help alleviate this problem, but it is unlikely that same number of Russian tourists will continue to travel to Turkey, as the Russian economy remains weak and security concerns related to terrorism in Turkey linger.

Similarly, the depreciation in the Ruble could prevent progress on two important infrastructure projects: State-owned Rosatom’s construction of Akkuyu, Turkey’s first nuclear power plant and Turkish Stream, a potential natural gas pipeline built across the Black Sea. In the case of the former, Rosatom has assumed 100 percent of the financing burden for the construction of the $25 billion nuclear plant. However, Russia’s economic collapse has prompted it to tap into its sovereign wealth fund to shore up the government’s budget. Since the signing of the Turkish-Russian agreement in 2010, Rosatom has been trying to share some of the financing burden for Akkuyu and sell 49 percent of the project company, but has thus far not found a bidder interested in the project. The financial risk is too great for most of the world’s western and Asian (excluding Chinese) nuclear companies

Current US-Turkish tensions are very real and have the potential to undermine trust in the relationship. The Turkish government sincerely believes that its western allies did not do enough to express outrage at the recent coup attempt, despite all of the efforts to express solidarity in Brussels and Washington. Yet, despite the current state of tension, it is unlikely that Turkey will take serious steps to deepen ties with Moscow, at the expense of the transatlantic partnership. Turkey and Russia have an interest in resetting their relationship and returning to the pre-November 24 status quo, but such action is not tantamount to a changing of Turkey’s strategic outlook. However, Turkish tensions with the West do impact NATO/Western relations with Moscow, largely because the Turkish leadership is now suspicious of western intent and, for domestic political reasons, will further instrumentalize wider public anger for domestic political reasons. The challenge, in the coming months, will be to manage these tensions and prepare for any political fallout