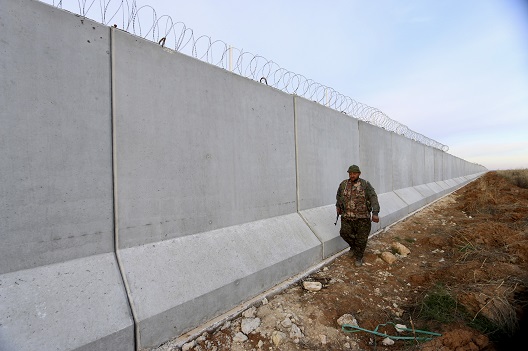 The Syrian regime, backed by Russian airstrikes, severed the main overland supply route from Turkey to Aleppo on Wednesday, February 3. The loss of this territory directly impacts Turkish interests in northern Syria and may portend a scenario whereby the US-backed Syrian Democratic Forces (SDF), a militia comprised mostly of Syrian Kurds, unite Kurdish-held territory east of the Euphrates with Efrin, an isolated canton bordering Turkey’s Hatay province. Turkey has threatened to attack the SDF, should it take steps to consolidate control over territory west of Euphrates.

With US air support, the Syrian Kurdish Democratic Union Party (PYD) has managed to consolidate control over much of the Turkish-Syrian border. Its militia, the People’s Protection Units (YPG), is manning a several hundred mile long front line against the Islamic State (ISIS or ISIL). In parallel, YPG forces in Efrin appear to be receiving Russian air support, particularly near Azaz, a key city currently occupied by elements of the Turkish-backed anti-Assad insurgency. Open source airstrike data suggests that the SDF could seize Manbij with US backing, while the Assad regime moves north from Aleppo to Al Bab. The YPG, in turn, could then cut a deal with the regime to travel through regime held territory to Efrin.

Turkey has said such action would result in military action. However, this proposed route may be protected from Turkish bombardment. Ankara is no longer flying missions over Syria over concerns that Russian aircraft could target Turkish aircraft, in retaliation for the November 24 bombing of one of its jets. Turkish artillery has struck positions inside Syria, but the M4 highway—the road that could link the three Kurdish cantons—is out of range.

The PYD is Syrian affiliate of the Kurdistan Workers’ Party (PKK), a US-, EU-, and Turkish-designated terror organization that has waged an insurgent campaign in Turkey for autonomy since 1984. A large number of the YPG’s leadership spent time as PKK members in the group’s stronghold in Iraqi Kurdistan’s Kandil Mountains before being dispatched to Syria to aid in the governing of Rojava. Turkey does not distinguish between the PYD and PKK, arguing that the former is simply a subunit of the latter. Specifically, both the PKK and the PYD have recognized Turkish and Syrian territorial integrity, albeit with an important caveat: the idea of “autonomous governance” includes governing structures that centralize power in PYD hands, in parallel with a longer term proposal for free travel between other Kurdish areas—a proposal Ankara views as akin to a plan for an independent Kurdistan.

The PYD/PKK political vision portends continued violence inside Syria, regardless of the fight against ISIS, and points to longer term problems for the US-Turkish alliance. The PYD has hostile relations with much of the Turkish-backed opposition. Thus, even after ISIS is ousted from areas it controls, the insurgent groups poised to take control of cleared territory could then clash with YPG. This scenario would place the United States and Turkey on opposite sides of a proxy war in a post-ISIS Syria. The Syrian regime’s offensive in and around Aleppo makes this scenario more likely and could alter Turkish decision making vis-à-vis the Syrian war.

Washington and Ankara have ignored this looming problem, choosing instead to wage two divergent wars in northern Syria. While the two allies do cooperate (Ankara has backed off of its maximalist approach towards the future of Bashar al Assad, presumably at the behest of the United States), this key disagreement about strategy in Syria undermines the fight against ISIS and the corresponding talks in Geneva.

The Turkish government has sought to isolate the PYD internationally, threatening to boycott the peace talks in Geneva after Russia pushed for Kurdish inclusion at the conference. The United States, in contrast, has gone further than any country in indirectly recognizing Syrian Kurdistan. The US military works directly with the YPG, which directs airstrikes along the Syrian-Iraq border and near Manbij, an ISIS-held town west of the Euphrates River. President Barack Obama’s special envoy for the anti-ISIS coalition, Brett McGurk, recently travelled to Kobani via a US special operations airbase, built near the Turkish border in PYD run territory. During his visit, McGurk met with key PYD officials, implying US recognition for Rojava, despite frequent official claims to the contrary.

This series of events could prompt Turkey to increase its support for the Syrian opposition, both in the pocket of territory north of Aleppo city and through Bab al Hawa in Idlib. In recent weeks, the Russian Air Force has consistently targeted Turkish convoys through Bab al-Salama. With its recent victory, Russia is certain to protect this newly won territory, while also taking aim at Turkey’s last supply route to Aleppo. This suggests the continued targeting of trucks coming from both border gates, placing Ankara at a disadvantage in Idlib vis-à-vis the Assad regime, but also in Aleppo, where its favored insurgents must now contend with the prospect of the city coming under siege. The weakening of Syrian rebels also undercuts a key—yet unstated—aspect of Turkish policy: empower Arab groups to prevent PYD/YPG consolidation in and around Aleppo.

The dynamics of the Syrian civil conflict are changing. The PYD is intent on taking advantage of the situation to advance their political project. The Turkish government views PYD empowerment through the prism of the growing insurgency at home and links events in Syria to the rising violence in Turkey’s southeast. As such, the Turkish government will likely take steps to further empower its Arab allies, leading to a continued cycle of violence inside Syria and Turkey. The linkages between the conflicts indicate that Ankara’s efforts to isolate the PYD in Syria has reverberations for the Kurdish movement in Turkey. This merging of the conflicts places the United States and Turkey on opposite ends of the Syrian civil war, despite the shared goal of forcing Bashar al-Assad from power.

Image: A Kurdish People's Protection Units (YPG) fighter walks near a wall, which activists said was put up by Turkish authorities, on the Syria-Turkish border in the western countryside of Ras al-Ain, Syria January 29, 2016. (Reuters)