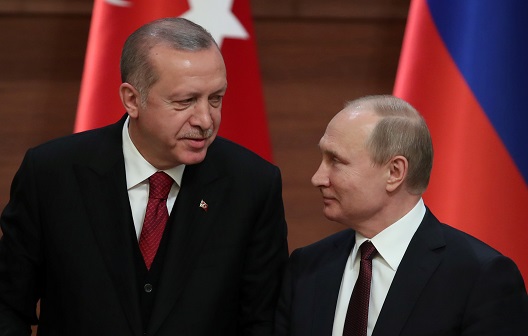 In August 2013, then Turkish Prime Minister Recep, Tayyip Erdogan, told reporters that a coalition of states should force Syria’s Bashar al-Assad from power, following the regime’s use of chemical weapons in Eastern Ghouta. At a reception in Istanbul, Erdogan was clear, saying reprisal strikes “can’t be a 24 hours hit-and-run …What matters is stopping the bloodshed in Syria and weakening the regime to the point where it gives up.” To do so, he proposed “something like the example of Kosovo,” where the North Atlantic Treaty Organization (NATO) engaged in a 78-day air war to “compel the president of Yugoslavia, Slobodan Milosevic, to end his campaign of ethnic cleansing in Kosovo.”

The August 2013 attack set in motion a series of event that culminated in then US President Barack Obama’s decision to not strike Syrian targets and, instead, reached an agreement with Russia on the need to dismantle Syria’s chemical weapons capacity. The Syrian regime, then, signed the Chemical Weapons Convention, touching off an unprecedented effort to destroy declared chemical weapons infrastructure and production facilities under extremely difficult conditions. The agreement failed. Assad held weapons back and, in April 2017, used Sarin nerve agent to kill insurgents in the town of Khan Sheikhoun in Idlib. In response, President Donald Trump ordered a small cruise missile strike, focused on the airbase where the regime launched the strike and stored the weapons used. Ankara, as was the case in 2013, supported military action and argued in favor of a no-fly-zone to prevent future chemical weapons use.

Over the past year, the Turkish government’s policy in Syria has changed. Ankara, now, is more narrowly focused on combating the US-backed Syrian Democratic Forces (SDF), a militia dominated by the Peoples’ Protection Unit, or YPG. The YPG is the Syrian affiliate of the Kurdistan Workers’ Party (PKK), an insurgent group active in southeast Turkey. The Turkish government has, in parallel, deepened cooperation with Russia, Bashar’s closest ally, to settle the conflict on terms it can accept, and to facilitate cross-border military operations. This cooperation has handcuffed Turkish policy, particularly in response to regime atrocities and the prospect of US-led military action to punish the regime for chemical weapons use. Ankara now has a symbiotic relationship with Russia, wherein the two sides need one another to try and settle the conflict. Turkey, thus, must placate certain Russian interests, even after the regime carries out atrocities, prompting military planning from Turkey’s traditional allies.

In August 2016, Turkish forces launched Operation Euphrates Shield, which resulted in the capture of al-Bab in February 2017. The operation successfully pushed the Islamic State from the border and blocked further Kurdish expansion from the group’s Manbij stronghold to Afrin, a then Kurdish controlled enclave in northwestern Syria. In January 2018, Ankara invaded Afrin, capturing Kurdish-controlled territory from the YPG in March.

Separately, Moscow and Ankara have worked together on the Astana Process, a rival peace process to the UN backed Syrian peace negotiations in Geneva. Turkey and Russia, along with Iran, are the three guarantor states, and together reached a series of de-escalation agreements that included a mechanism for the Turkish military to establish up to twelve observation points in Idlib. To date, Ankara has set up nine points, spaced around the opposition—regime front line.

In April 2018, Presidents Erdogan and Putin, alongside Iran’s President Hassan Rouhani, touted the accomplishments of the Astana process and underscored the need to continue to work together on implementing decisions made at a congress held in Sochi and to hasten work on the drafting of a new constitution for Syria. This tripartite alliance remains divided over many issues, but they all criticized the United States and the SDF, accusing both of trying to divide Syria and to foment intra-ethnic tensions.

The Russian-Turkish entente has clearly impacted Ankara’s response to the April 2018 chemical weapons attack in the town of Douma, in Eastern Ghouta. The Turkish government has pursued a measured response. Turkey supported the American drafted United Nations Security Resolution that called for the establishment of a new investigative mechanism to determine the perpetrator of the chemical attack. The resolution did not endorse military action and instead echoed the Turkish Ministry of Foreign Affairs’ call for the “Organization for the Prohibition of Chemical Weapons to immediately investigate this case.” In any case, Russia vetoed the resolution and tabled its own resolution, albeit with a poison pill that allowed for the UNSC (where Russia has a veto) the responsibility of assigning blame for the attack. The United States, France, and UK all used their veto.

Ankara has since called for calm, warning against unintended escalation between Russia and the United States. Turkish Prime Minister, Binali Yildirim, criticized Moscow and Washington for “fighting like street bullies” and encouraged “countries [to] join hands to ensure the territorial integrity of Syria and Iraq by eliminating terror groups on these lands.” Turkish Foreign Minister, Mevlut Cavusolgu, adopted a stronger line, telling a think tank audience “The Assad regime should absolutely leave power in Syria.” A week prior, Cavusoglu suggested that “Assad [would] eventually lose” and framed Turkish interests as ensuring Syria remain united—another overt reference to the Kurdish issue.

The tension between Turkish antipathy for Assad and Ankara’s partnership with Moscow to facilitate cross-border military operations aimed at the YPG is clear. The Turkish government has to manage tensions with Moscow, lest otherwise risk complicating its open-ended military presence in northern Aleppo and Idlib. In many ways, Ankara’s vulnerability is similar to that of the United States, which also has troops in country, and is reliant on a de-escalation mechanism to prevent unwanted clashes with Iran, Russia, and the regime. The implications for the United States are clear: Ankara, a NATO ally, has adopted a transactional relationship with Russia and its traditional allies. This posture does not forebode a shift in “axis” whereby Turkey will abandon its traditional alliance structure in favor of a Russian dominated region. Instead, it shows that Ankara now treats Moscow in much the same way as the United States: a transactional partner.

The question, then, is what happens after the US-led strikes in Syria end? The roots of the Turkish-Russian relationship will remain, as will Bashar’s grip on power. Turkey is committed to working through Russia to secure its interests, and has spoken out against American goals in northeastern Syria. These dynamics are certain to continue, even if Turkey speaks out in favor of the forthcoming military strike. The changes over the past year in Syria have resulted in a durable Turkish-Russian relationship in Syria and a number of overlapping interests. Ankara’s handling of the latest chemical strike clearly shows how Turkish policy has shifted since 2013, and that in the coming weeks the drivers of Turkish policy aren’t likely to change.

Aaron Stein is the senior resident fellow on Turkey with the Rafik Hariri Center for the Middle East.