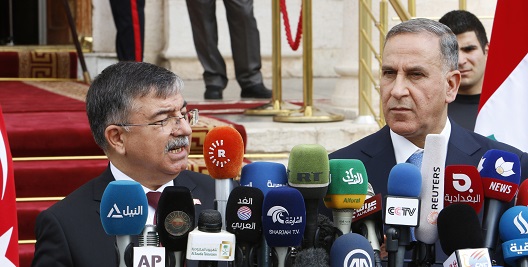 The fall of Ramadi has prompted questions about the overarching US plan to degrade and defeat the Islamic State (ISIS or ISIL). For neighboring Turkey, the plan remains deeply flawed, owing to the notion that ISIS’s defeat requires the toppling of Bashar al-Assad in Syria. In Iraq, Turkey has rhetorically advocated for a similar policy to that of the United States: Baghdad must take concrete steps to address sectarian grievances and arm the country’s Sunni minority to battle the extremist militant group without the assistance of the controversial Shia militias.

Yet, beyond the convergence in rhetoric, the United States and Turkey are cooperating with different political actors. Washington is working closely with Iraq’s Prime Minister Haider al-Abadi to overcome sectarian differences, while Ankara is working with a rival political faction to lessen the Prime Minister’s control over the Iraqi security forces. As in neighboring Syria, Ankara and Washington share the same goal, but pursue largely opposing tactics to achieve it.

To support an Iraq-led fighting force against ISIS, Ankara has deployed twenty military trainers at a base in Bashiqa, where multi-ethnic and religious Iraqis, organized under the banner of al-Hashd al-Watani or Popular Mobilization Forces. Atheel al-Nujaifi, the governor of Mosul and a close Turkish ally in Iraq, controls the base. In theory, these forces would hold Mosul once the Iraqi Security Forces (backed by US airstrikes) clear ISIS from the city. Turkish politicians have pointed to this Turkish led train-and-equip program as evidence of the government’s commitment to fight ISIS.

In reality, the training is rudimentary and many Iraqis consider the fighters with the Popular Mobilization Forces a vanity project for Nujaifi, whose credibility and popularity have declined considerably in recent years. The men at the camp receive martial arts training for three weeks, sing patriotic songs, and practice how to hold and shoot unloaded AK-47s purchased on the black market. Ankara’s efforts to provide weapons have failed, most likely due to Baghdad’s intransigence. At the end of the three-week course, the men return home without a weapon and are expected to wait for a phone call before marching into battle against ISIS in Mosul. Meanwhile, three kilometers away, the Kurdistan Regional Government’s (KRG) Peshmerga forces have deployed along a front line to defend against daily ISIS attacks. Nujaifi’s weakness and the ineptitude of the Popular Mobilization Forces pose no threat to the Peshmerga, and are thus tolerated inside Kurdish-controlled territory.

Turkey’s already limited role in the conflict derives its weakness from its closest local ally: Atheel and his brother Osama al-Nujaifi. Osama, one of Iraq’s three ceremonial vice presidents, controls the Sunni-majority Mutahidun political party. Between 2005 and 2009, Ankara pursued a more inclusive policy in Iraq, wherein it supported Sunni political elements while taking steps to reach out to Shia actors, including controversial Shia cleric Muqtada al-Sadr. With the failure of Turkey’s preferred multi-ethnic political party Al-Iraqiya to gain power after the 2010 election, Ankara’s policy focused on creating a political counterweight to former Prime Minister Nouri al-Maliki. Turkey’s increased support for the Nujaifi brothers altered its decades-old policy of militantly defending a “one Iraq” policy, owing to fear of Kurdish independence. Subsequently, Ankara’s support for Sunni political actors have cast Turkey as a sectarian actor in Iraq, concerned only with the empowerment of Sunni politicians with which it had close economic and political relations.

Ankara’s feeble influence in Iraq also stems from the unpopularity of its support for the Nujaifis’ overarching plan to address Sunni grievances: the further devolution of powers to Iraqi provinces and the creation of a Sunni federal region similar to that of the KRG. This process would entail easing de-baathification laws, a policy for which Ankara has expressed support in the past. Osama Nujaifi’s pursuit of this policy, however, contributes to the stalemate over the creation of an Iraqi national guard—a policy intended to incorporate Sunni tribal fighters into the Iraqi Security Forces to battle ISIS. Osama’s Mutahidun party blocked passage of the bill, contesting the provision requiring national guard units to report to the Prime Minister. Parliament has made similar efforts to limit de-baathification, but Mutahidun has blocked the bill’s passage over concerns that it does not go far enough. In response, Shia-aligned Prime Minister Haider al-Abadi has intensified efforts to impeach Atheel Nujaifi.

The Nujaifi proposal to federalize Iraq has proved controversial with Sunni MPs, due in part to the perceived Nujaifi alliance with KRG President Massoud Barzani, whose Kurdish Democratic Party (KDP) has strong ties to Turkey. When Ankara helped broker a political reconciliation between the KDP and the Nujaifis in 2009, it undercut Sunni Arab support for Atheel in Nineveh. When Atheel fled to the KRG in June 2014, locals in and around Mosul regarded him as little more than a pawn of Turkey and the KDP. Barzani’s efforts to bring parts of Nineveh under Kurdish control has further inflamed anti-Kurdish sentiment among certain Arab Sunnis, adding to the widely held conspiracy theory that Atheel and Ankara have entered into a partnership to resurrect the Ottoman-era Mosul vilayet. Add to this the deeply felt suspicion among many in Iraq that Turkey controls ISIS, aided in its creation, and uses the group to advance its regional agenda.

Despite these challenges, Ankara remains committed to elements of the Nujaifi plan. Foreign Minister Mevlut Cavusoglu, in a subtle reference to the regionalization proposal, has argued that locals should govern cities cleared of ISIS, allowing Iraq to “evolve into a functioning federal state.” Iraq’s political dynamics, however, suggest that this policy prescription is a non-starter, owing to the near universal rejection of the Nujaifis’ regionalist agenda.

Turkey’s efforts to bolster its preferred Iraqi politicians ultimately contribute to the marginalization of Ankara as a trusted actor in Nineveh. Furthermore, Ankara’s actions have placed it in opposition to Prime Minister Abadi, which suggests that Turkish influence in Nineveh will continue to be regarded with suspicion. These dynamics, in turn, portend a limited role for Turkey in the forthcoming battle for Mosul, specifically, and a limited ability to play a decisive role in any “hearts and minds” campaign among Iraqi Sunnis, more broadly. For the United States, the lack of a credible regional counterweight to Iran suggests that Washington has few partners on whom it can rely to help galvanize Sunni support for the war against ISIS. Indeed, Ankara’s support for the Nujaifis undermines US-backed efforts to create a national guard and Abadi’s efforts to empower Sunni units to fight ISIS.