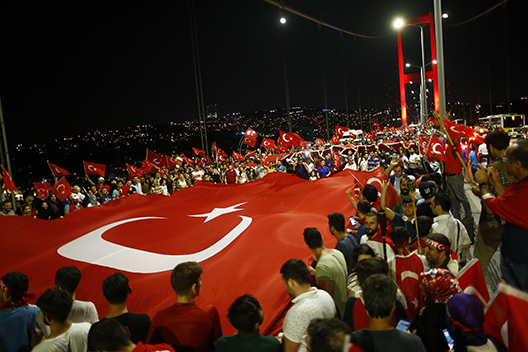 As different capitals in the West form and inform their policies on Turkey in the aftermath of the attempted coup of July 15, three guiding analytical frames ought to clarify Turkey’s relationship with the West. The first relates to Turkey’s position within the international system; the second relates to the attempt at political change in Turkey through military intervention; the third pertains to measures taken in response to that attempt. Without understanding all three, policy mistakes could lead to a deteriorating relationship between Turkey and its international allies.

Turkey is a member of NATO, the Council of Europe, a founding member of European institutions such as the Organization for Economic Co-operation and Development (OECD), and the Organization for Security and Co-operation (OSCE). For almost seventeen years, Turkey has also been a candidate for full membership of the European Union; all of which means Turkey has justifiable expectations of the West in general and Europe in particular. Even prior to the coup attempt, many Turks have suspected that Europe and the United States do not quite recognize Turkey as an integral partner. The rise of anti-Muslim sentiment in the West over the last few years and statements in the past and present by senior European leaders that reject, a priori, Turkey’s eventual membership in the EU only serve to reinforce this perception.  This bad blood, developed over many years, casts a shadow over relations. Controversies over the management of the refugee crisis, Turkish visa-free travel throughout Europe, and major policy differences between Washington DC and Ankara over Syria have not brought Turkey and different Western capitals any closer.

In the wake of the attempt to sweep aside Turkish President Recep Tayyip Erdogan and his government through an illegal and deadly martial action, Turkish public opinion—at least as represented in media outlets and political statements—remains convinced that many in the West had hoped for the coup to succeed. It’s plausible that some Western politicians were ambivalent about a coup, with many diametrically opposed to it, as per official statements made thereafter. Turks have called on Western leaders to visit Turkey, and are likely comparing Western reactions to the coup attempt to those after the 2015 Paris attacks, when a large contingent of international leaders descended upon France in a show of solidarity. With some noteworthy exceptions, such as UK Minister of State for Europe Alan Duncan, few Western politicians flew to Ankara or Istanbul to show solidarity with a Turkey reeling from the impact of the coup attempt.

More than 200 died as a contingent of the Turkish military attempted to seize power; an attempt that was utterly contrary to democracy, and the success of which would have likely led to substantial & long-lasting damage to Turkey. Ordinary Turkish citizens bravely faced down tanks and armed soldiers as Turkish pilots in Turkish planes bombed the parliament building. Many Turks resent the failure of Western leaders to display the critical gesture of solidarity by sending envoys to the country in the aftermath – that some opinion leaders, though not political leaders, in the West opined that the coup might have been staged has not helped matters.

Considering the potentially devastating effect of a successful coup on Turks, Turkey, Europe, and regional stability, sending senior Western envoys—especially given the troubled Turkish-Western relationship—would have been an encouraging note of camaraderie. The failure to do so is a missed opportunity and creates difficulties as Western leaders engage Turkey on different issues. For the foreseeable future, many Turks will continue to suspect that the West would have accepted a forced military ouster of the Turkish government and would have been relatively indifferent to the cost of such an attempt on Turkey’s social fabric. Western actors will have to work hard to convince ordinary Turks otherwise.

In the aftermath of the failed coup, Turkey will likely use its full diplomatic weight to insist on three things: an understanding that Turkey will take extraordinary measures; US cooperation in the extradition of Fethullah Gulen, a Turkish Muslim religious preacher accused by Turkey of orchestrating the attempted coup, and currently living in the United States; and international cooperation in the neutralization of domestic and international Gulen-linked institutions. On those points, it is difficult to envisage a full resolution in the short term. Objecting to every extraordinary measure Ankara takes would not be particularly consistent—other Western countries have engaged in states of emergency for far less. Temporary restrictions imposed by a Turkish state of emergency may not be so difficult for Western capitals to appreciate.

Nonetheless, civil and human rights organizations (such as Amnesty International, Human Rights Watch, and Reporters without Borders, among others) correctly critique Ankara’s measures, including the closing various civil society institutions, detaining thousands, and allegedly abusing detainees. Turkey’s political and social health will rely in part on the ability of civil society to critique the authorities, even if during a legitimate state of emergency. The rule of law benefits from such scrutiny and solidarity with Turkey does not entail the abjuration of such scrutiny. Regarding these activists and organizations as partners in a process of consolidating accountability benefits the rule of law—and Turkey stands to be strengthened, not weakened, by such efforts.

Gulen and his movement will likely remain a point of tension between Turkey and those countries in the West where he and his movement are active via different institutions. As of yet, no US or European political establishment agrees with Ankara’s claims on Gulen, and the United States has made it clear that no extradition will take place without the provision of indisputable evidence of direct culpability. Despite Ankara’s claims to have provided as such, DC, as yet, disagrees, and that impasse is unlikely to disappear any time soon.

A possible way out of the gridlock might be the engagement of an international body that is able to arbitrate a resolution of some sort. That might be a course of action Turkey could lobby for successfully – but it might also be rather difficult to pass within Turkey at the same time, as Turkish public opinion appears overwhelmingly in favor of immediate extradition. A continuing stalemate on the issue without some sort of route for resolution does not bode well, particularly against the backdrop of regional problems where Turkey’s role is vital.

The attempted coup and its aftermath raise critical questions for Turkey and its relationship to the West. While points of disagreement will perpetuate certain tensions, the US in particular & the rest of the West in general and Turkey can and should take concrete steps to bridge the gap in their international relations. Neither the perception of Ankara engaging in overreach, nor the perception of Western insensitivity to the grave losses that Turkey has already suffered, will aid in that regard at all. The future of Turkey’s role within the West and Western-Turkish co-operation stands to be affected deeply – and that should not be taken lightly.

Image: Pro-government demonstrators hold a giant Turkish flag during a march over the Bosphorus Bridge from the Asian to the European side of Istanbul, Turkey, July 21, 2016. (Osman Orsal/Reuters)