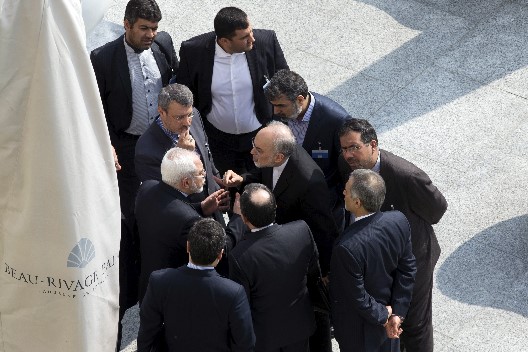 The June 30 deadline will make or break the US-Iran nuclear deal. Until then, the preliminary accord, its interpretation, and implementation will be the center of attention for all stakeholders. However, less attention will be given to the developments in Syria, Yemen, Iraq, and Lebanon. The United States and Europe must take on a greater leadership role to mitigate the potential fallout from a newly empowered Iran.

For many in the West, the preliminary framework reached on April 2 marks a good first step in nuclear nonproliferation and regional security. Iran has indeed agreed to reduce considerably its enrichment capabilities, allowed only to enrich 3.67 percent for the next fifteen years. Most of its stockpile of enriched uranium will be neutralized and its plutonium reactor at Arak will be dismantled. International inspectors will have access to Iran’s nuclear facilities and the supply chain that supports the program.

But for the people in the Middle East, this does not necessarily mean that the region will be a better place. On the contrary, the threat was never Iran’s nuclear program; it has been and still is Iran’s interventionism. Iran’s Revolutionary Guard and their proxy militants in Lebanon, Syria, Iraq and Yemen, encompass the real source of danger and the actual force behind the killing machine in Syria. A nuclear Iran poses less of a threat to the Middle East than an Iran with the determination and financial capabilities to direct regional outcomes to spread its hegemony in the region.

The Islamic Revolution’s ideology centers on spreading its values beyond Iran and into the region—one of the main jobs of the Revolutionary Guard. Its failure—in their view—poses an existential threat to Iran’s current regime. For the Iranian true believers, bringing all Shia under Iran’s umbrella takes far greater priority than the nuclear program. In this sense, the nuclear program has always been a tool to reach the ultimate goal: spreading the Islamic Revolution to all Shia and expand its influence.

To that end, Iran has worked aggressively and giving up the possibility of a nuclear bomb is a small price to pay to lift sanctions and boost their proxies in Yemen, Iraq, Syria, and Lebanon. The timing could not have been more critical for Iran, given the Saudi-led military operation in Yemen signals confrontation.

So Iran will likely comply with all the terms of the agreement. The different interpretations of the deal given by Iran in public statements only means to reassure Iranians that they have won. The coming three months will prove Iran’s commitment—including that of hardliners and the Revolutionary Guard—to these terms to ultimately lift sanctions. It might also lead to two unfortunate scenarios, in the likely case that Arab governments continue to feel that the agreement will not stop Iran’s regional ambitions:

1.       Arab States might take things into their hands to stop Iran. The Saudi-led military operation in Yemen might turn to boots on the ground and eventually expand to Syria. When Iran, unrestricted by sanctions, strengthens its proxies in the region a regional war will ensue, nothing less. Everyone in the Middle East will be involved; no one will be spared.

2.       If Saudi Arabia decides to limit its operations to Yemen, Sunni Syrians, Iraqis, and Lebanese could feel abandoned, with no other choice but to rely on, support, or even join Sunni extremist groups such as the Islamic State (ISIS or ISIL), the Nusra Front, and al-Qaeda. This scenario could see the expansion and entrenchment of such extremist groups.

Iran must face greater diplomatic pressure before June 30 to avoid such catastrophic scenarios—and the United States must play a larger role.

The United States must use its power to force Iran to curb its regional ambitions—a difficult but necessary task. Iran should not be allowed to escalate its operations in Syria and forced to let go of Assad. It should be held accountable for terrorism against the Syrian people, not given a free hand for its compliance with the terms of the deal.

Iran is not an ally in the “war on terror” and will never be. Therefore, the US should immediately discuss a comprehensive regional strategy with its allies in order to avoid war, fight terrorism, and keep Iran and its proxies in check. The United States must not appear as if it is siding with the Shia armies against the Sunnis, which could further degrade the US image among the Sunni majority countries and adversely affect US interests. Further, no real change will have occurred if this deal only contributes to the empowerment of Iran’s troops in the region. The so-called “soft issues” of human rights, free speech, and reform remain a vital investment in the long-term US interests in the region.

Finally, US engagement with Shia in the Middle East—not only with Iran and its proxies—will curb Iran’s growing influence. In the midst of a sectarian madness consuming the region, Shia need an alternative to dependence on Iran. Without it, they are far more likely to join its forces to fight Sunnis in the region. Today, only the United States and Europe can offer this option, otherwise no one else will. The only remaining option offered today is death on a sectarian plate.

Hanin Ghaddar is a Nonresident Fellow at the Rafik Hariri Center for the Middle East and the Managing Editor of NOW (mmedia.me). She tweets @haningdr